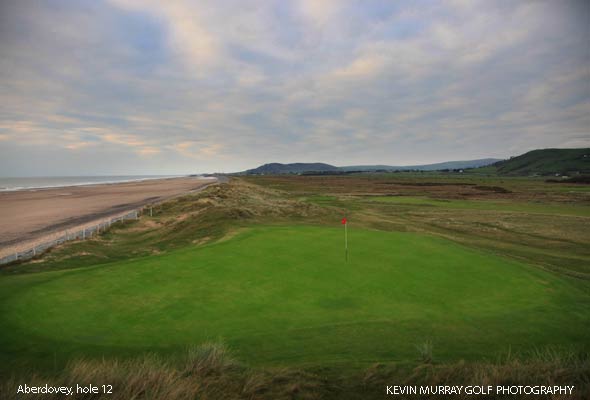 Absent a helicopter, or perhaps a seaplane, there is no easy way to get from London to Aberdovey (or Aberdyfi, as its Welsh-speaking inhabitants spell the town). No three-lane highway traverses the hills and valleys of central Wales; no airport serves these rural fastnesses.

You can drive, but it will be a near five-hour journey, the first couple a slog up the motorway to Birmingham, then off into the hinterland between England and Wales. This is the Marches, held in medieval times by some independently minded barons, granted land by the English rulers on condition they protected the kingdom against Welsh raiders. The Romans were here, too: Forts in the small town of Caerswys and elsewhere testify that the Celtic population of these remote hills has never taken kindly to foreign domination.

On a good day, it’s a beautiful drive. But often the hills are shrouded in mizzling rain, blocking the views and making the two-lane roads even harder work. Better to follow the example of golf’s greatest chronicler, and go by train.

For better or worse, Aberdovey Golf Club owes its fame to Bernard Darwin. It was, as he wrote in The Golf Courses of the British Isles, “the course my soul loves best.” It was first created by his uncle, Colonel Arthur Ruck, while on leave from his regiment in the 1880s, using flower pots for holes. And throughout his life, Darwin would return there, always by train, counting “the diminishing number of stations that divide him from it.” For any golfer who has lost himself in Darwin’s lyrical prose, a pilgrimage to Aberdovey Golf Club is, at some point, a necessity.

The train trip really begins in Birmingham. Darwin would have used Snow Hill station, but now the subterranean wastes of New Street are our jumping-off point. It isn’t the most appealing place to begin a pilgrimage, but then, late 19th- and early 20th-century Birmingham, the heart of Britain’s manufacturing industry, would hardly have been beautiful, either.

Once the train has passed through the industrial West Midlands, though, the landscape opens up and the scenery is more alluring. This is some of the most isolated countryside in Britain, sheep and cows more common than humans. It’s remarkable, actually, that the line survived the cuts of the early 1960s, when much of the rural rail network was removed. Luckily for us, a direct train still runs, several times daily, from New Street to the coast of mid-Wales. It isn’t the romantic steam train of Darwin’s day, but at least we can follow in his tracks. About three hours later, then, the train pulls into Aberdovey station. The shock is just how close it is to the links: Change your shoes onboard and you could comfortably be on the 1st tee in two minutes.

The course is (fairly) true to its old-fashioned feel. The famous blind par-three 3rd, Cader, is not the terror it was in Darwin’s day—the huge bunker that previously fronted the green is now grass—but it remains a connection back to the past. Cader means “chair” in Welsh, and the hole’s name echoes that of the mountain that overlooks Aberdovey, Cader Idris, named for the giant who, legend tells us, sat on the mountain gazing at the stars. Similarly in days gone by, caddies and passers-by might sit atop Cader’s dune, watching balls reach safety or perdition.

So many of the pre-1900 links courses had a blind hole played straight over the largest dune on the property, created, one assumes by golfers of the era behaving as guys always have—“I bet I can hit my ball over that, and you can’t!” Most, though, have been eliminated or neutered. Cader, appropriately for the course made famous by Darwin, who lamented every change to Aberdovey, has not.

Henry Colt, Herbert Fowler, and James Braid all consulted at Aberdovey Golf Club, though it seems that the club, conservative to the last, only implemented the first pair’s recommendations piecemeal, and removed Braid’s changes entirely after a revolt by members.

In one area, though, the club has been fairly radical. About seven years ago, it hired Scottish-based golf architect John Kemp and ecologist Lee Penrose to recommend changes that would give the much-tweaked course a more coherent feel. They suggested a switch to an older style. Clean-edged revetted bunkers were swept away and replaced by a more free-form look, with sandy areas fringed with fescue and marram grasses. Areas of scrubby growth were removed, dune grasses encouraged to return, and the course became more of a haven for the abundant animal and plant life that inhabits seaside dunelands.

Though isolated, its proximity to the railway makes Aberdovey Golf Club more accessible at first sight than it might seem. Once there, this part of the Welsh coast is an adventurous golfer’s dream. The equally famous links of Royal St. David’s lies only an hour to the north—and on the same railway line—while the entertaining, if less heralded, Borth & Ynyslas is just across the estuary of the Dovey River. The magnificent mountain scenery of Snowdonia could distract even the most dedicated golfer’s attention, while the ring of castles that King Edward I of England built in the late 13th century to subdue the rebellious Welsh remains one of medieval Britain’s most remarkable achievements.

But for the golfer, it is all about one man. As Patric Dickinson wrote in his wonderful little book, A Round of Golf Courses, at Aberdovey Golf Club “one must begin by letting Bernard Darwin through on the way to the first tee.”

The Largest Golf Club in the World: Mission Hills, China

The Top 5 Things We Love About Fall Golf