Charleston, South Carolina, has the most distinctive urban architecture in the country. While visitors can spend days wandering around the 19th century homes of the downtown area, the entirety of which is designated a National Historic Landmark, they would be remiss if they didn’t venture out of the city to explore the wetlands, waterways, and beaches of the surrounding Lowcountry, as the coastal region of the state is known.

One of the biggest natural attractions in the area is on Johns Island, located just south of Charleston, where the Angel Oak resides. More than 350 years old, this impressive specimen of a tree stands 65 feet tall, while the trunk has a circumference of more than 25 feet, and the twisting, fern-covered limbs are so long (up to 89 feet) that some of them have to rest on the ground.

The Angel Oak is indeed a heavenly sight, but for golfers, the true Valhalla is just down the road, at the Kiawah Island Golf Resort, where man-made marvels like The Sanctuary Hotel and Ocean Course, site of the 2012 PGA Championship, meld seamlessly with the natural beauty of the barrier island on which the resort resides.

The majesty of both the setting and the architecture is apparent upon checking in at the 255-room Sanctuary. Through the expansive lobby, I can see the ocean beyond the lawn and dunes. Sweeping staircases at either end of the main wing offer the sense of the ultimate seaside mansion, an artful blend of the elegant and casual.

The Sanctuary’s architecture and environs are as timeless as the genteel homes of Charleston, so I was surprised to learn that this centerpiece of the resort and the hub from which to enjoy all the amenities, from a major championship course to one of the best beaches in the world, only opened in 2004.

The ambiance is no accident, as the resort went to great trouble to provide the Sanctuary’s idyllic sense of place. Using the world’s largest mechanical spade during construction, crews dug up 400 mature trees, built up the land by 20 feet to allow for unobstructed views of the ocean, then replaced the trees.

I had barely checked in, and already I felt at home. But there was little time to lounge, as a tee time on the Ocean Course awaited.

Perhaps the developers got the idea for raising the hotel from Alice Dye. It was the wife of course designer Pete Dye who suggested raising the fairways of the Ocean Course to not only give players a better view of the Atlantic, but also to make wind more of a factor on the 7,356-yard layout, which made its debut at the 1991 Ryder Cup.

During the “War by the Shore,” players were baffled by the course, which was (and remains) unlike any they had seen. Like the Sanctuary, the holes on the Ocean Course look as though they have been there for decades, belying the artfully painstaking design and construction process that was completed just before the Matches. 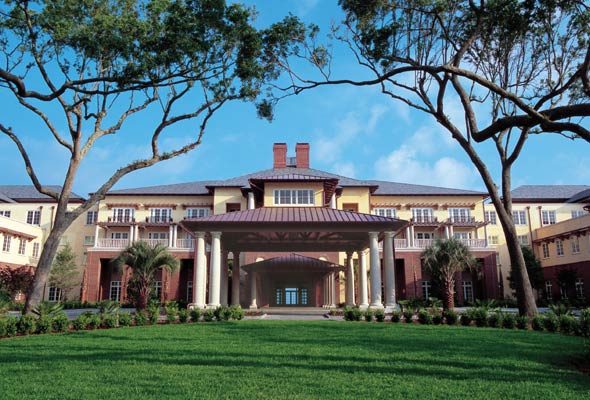 The course’s primary defense is the wind, which provided Dye’s biggest challenge when designing the layout. Although a brisk breeze is almost always blowing, the lack of a prevailing direction impelled Dye to build holes that were flexible enough to play downwind one day and upwind the next. The result is an elongated figure-eight routing in which the closing holes on each side—nine holes in all—play along the ocean from opposite sides.

While the gusty conditions keep temperatures relatively mild, especially in the summer, they can make scoring difficult because the wind really brings into play the waste areas that line most holes and are up to seven feet below the level of the fairway. The hard-packed sand areas, which double as cart paths (riding is permitted after noon), require a specific type of recovery shot—more a nip with a pitching wedge than a blast with a sand wedge.

Dye has made several changes to the course since it opened, most significantly shifting the 18th green 25 yards closer to the ocean. Complemented by the five-year-old clubhouse that overlooks the putting surface, the oceanside 18th occupies one of golf’s most dramatic settings for a finishing hole, right up there with Pebble Beach Golf Links and the Old Course at St. Andrews.

With weathered shingles and a wraparound porch, the comfortable clubhouse looks as though it belongs in the Hamptons or Cape Cod. Inside, the pitch-perfect clubby feel of the Ryder Cup bar is ideal for post-round reflections. During the 2012 PGA, expect the room to be crowded with players trading war stories after windswept rounds on a course that can stretch to 8,000 yards.

A round on the Ocean Course is definitely the first item on your to-do list for the visit. But for the rest of your stay, it would be a good idea to divide your time between playing the resort’s other courses—Cougar Point, Oak Point, Osprey Point, Turtle Point—and exploring the 10-mile-long island.

Situated east to west, Kiawah, which takes its name from a Native American tribe, is the rare example of a depositional barrier island, rather than an erosional one. In other words, the tides and surf deposit more sand than they remove, creating striking dunes covered with sea oats, a long-stalk grass that dances in the wind.

To really appreciate the island’s beauty, a kayaking trip from Mingo Point on the western end is a must. My leisurely two-hour paddle with about two dozen other guests (most in tandem kayaks) took us down the Kiawah River, where we saw dolphins and a couple holes of the private Cassique layout, and back around through tidal creeks in the marsh grass.

The two naturalist guides, Scott and David, were full of interesting information. Who knew fiddler crabs got their name from the back-and-forth feeding action of the male’s small claw (the bow) while they hold out their large claw (the fiddle)?

There are plenty of other themed guided tours of the island, from bird watching to fishing charters to the popular gator walk, on which guests get to pet an alligator, albeit a baby one. Or if you prefer to see the property on your own, there is no better way than by renting a bike and exploring where the miles of paths take you. 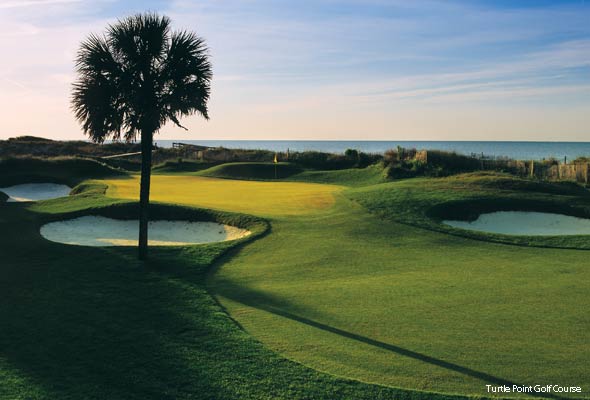 The yin to the yang that is Kiawah’s wildlife is the resort’s pampering touches like the spa, the perfect antidote to all the physical and mental fatigue inflicted by the kayaking and golf. The prelude to my 60-minute massage treatment, which included heated herb-filled wraps to loosen the muscles, was a dip in the vitality mineral whirlpool, which is filtered with soothing saltwater instead of harsh chlorine. I wish I could tell you about the massage, but it was so restorative that I fell asleep.

Just about the only spaces more relaxing than the spa are the rooms at The Sanctuary, which feature handcrafted furniture, custom-made beds, and marble showers with rain showerheads. Although luxurious, the rooms aren’t sterile. Instead, they exude a homey charm, thanks to touches like plantation shutters and private balconies.

The place has such a comfortable, lived-in feel that I would have been quite happy to move right in. Indeed, one couple did just that, staying in a suite for three months.

No doubt, they ate well during their stay. Jasmine Porch serves daily buffet breakfast and  Lowcountry fare like shrimp and grits, while the Ocean Room, the resort’s premier restaurant, converted a few years ago from nouvelle cuisine to a prime steakhouse.

What’s on the menu at the Ocean Room? It depends on the availability of the freshest ingredients: Chef de cuisine Andrew Venable only builds his menu after stopping at a farm each morning just outside Kiawah. He also grows his own herbs at the resort and gets his dry-aged beef from an in-state organic cattle ranch.

The Kansas City strip was first-rate, but just as details like bunker style and green contours can make a great course even better, what really made the meal was the side dish: French fries topped with truffle oil and white truffle shavings.

The same could be said about the ingredients that make up Kiawah—casually luxurious facilities, unforgettable golf, Southern hospitality, and natural beauty. It’s a recipe for a resort experience that has no equal.

The Sweet Life in Tuscany