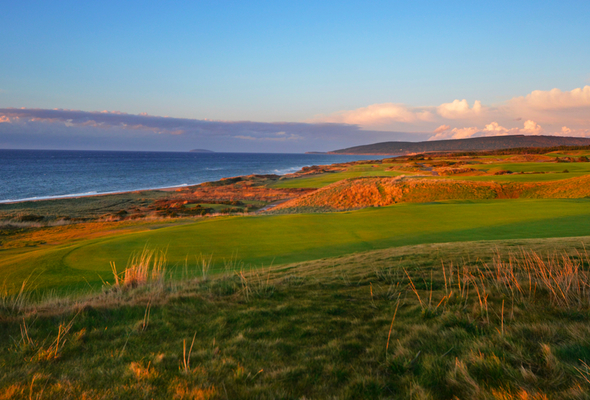 “How good is Cabot Links?”

Among golf travelers, this was far and away the burning question of 2012. Any new project backed by Bandon Dunes major domo Mike Keiser was bound to receive its share of attention, but in a year that saw so few course openings—good, bad or indifferent—Cabot’s hype machine seemed to operate in a frictionless environment. Of course, there was also plenty of substance to hype. Every luscious photograph released by the resort carried a powerful implicit message: Here is real links golf, on the Eastern Seaboard. What a novel concept!

Well, we’re about to find out. Here’s one observer’s answer (read: opinion) to the burning question:

In a decade of writing about golf architecture, few courses have been as challenging for me to review, or more resistant to easy categorization, than Cabot Links. We all know that in the golf media, the word “great” is thrown around rather too liberally. Few courses are truly “great”—many are very good, or even excellent, but that’s not quite the same thing. A great course reveals itself to be the ultimate expression of a certain design style, or breaks new ground in characterizing what a golf experience can be. A great course defines an era.

And keep in mind that Cabot is playing in the big leagues. Links golf is the heart and soul of the game, its courses the most beloved and magical fields of play—among links, the bar of true “greatness” is set dauntingly high. Part of this is due to the aura of antiquity—few would argue that Kingsbarns has the same “feel” as the Old Course, even if they happen to prefer the former. For this reason, many would suggest—reasonably—that early reviewers take a cold shower, give courses like Cabot five to ten years to bed down. But who can resist?

The architecture of the modern links also speaks to this question of greatness—how well these recent designs mesh with our personal sense of what makes links golf special. Cabot was built not on unspoiled duneland but on the sand-capped site of a former coal mine. This fact is presented not to advance some arcane argument about what is or isn’t a links—this emphatically is—but rather to place it in its proper context. These former industrial zones are often where new links or links-inspired courses are built these days (e.g. Chambers Bay, Streamsong), and Cabot’s site is very good, featuring eighteen big views of the Gulf of St. Lawrence and high hills to the north and south. There’s both grandeur—a Bandonesque seaside run from 13 through 16—and intimacy, as around the turn the routing hops over to quieter land surrounding a picturesque working harbor.

What’s missing? Perhaps it’s the sense of leniency that many of the older links layouts promote. From the 6,400-yard green tees, Cabot features four holes (2, 4, 13, 15) with fairly significant forced carries off the tee. All four of these happen to be very good to great holes, but if the wind is up or the driver’s misbehaving, watch out. And this isn’t even counting the par-four 11th, which doesn’t demand a forced carry but is easily the most penal driving hole on the course. The classic links can be as tough as you’ll ever want, but the forced carry is not a common defense. This is not a value judgement so much as as it is an attempt to identify a characteristic of the course—one that perhaps places it more in the camp of the modern links.

Great courses cannot exist without great holes, and Cabot does have its share. Besides the coastal beauties, there’s No. 2, a gargantuan par-five that sprawls across wild waves of ground before rising to a green positioned on the edge of a high plateau. There’s No. 4, which features a thrilling blind drive over a sleepered bunker and a mid-iron approach to the first half of Whitman’s wonderfully executed double green. There’s No. 9, a terrific strategic mid-length hole in which taking on a nest of fairway bunkers on the left opens up the green, while those that bail out face an uphill approach that must carry two of the nastiest pits on the course. And the green of No. 17 is a masterpiece. There’s much to praise.

But what about No. 8? A par-four that’s so simple-looking but for a pair of obnoxiously well-placed mounds—one in the layup zone, one just short of the green. Is it drivable enough to be truly tempting? What about No. 11? Is it frustrating that a hole that looks so much like a Cape doesn’t play like one? What about No. 14? As a three-quarter wedge to an enormous green, is it a real hole or is it a photo op? And No. 18…the world of links golf is not known for its great finishers, but this one is just mean—uphill and very long, with the clubhouse sitting practically on top of the green. Questions, questions!

At this point my attempt to produce a conventionally structured review fell apart under the weight of these questions. I decided to use my “phone-a-friend” lifeline, calling in none other than esteemed musician and occasional golf writer Lloyd Cole. The former frontman of Lloyd Cole and the Commotions is now an active solo artist who takes every chance he can to play the world’s great courses on his concert tours. I knew he’d been to Cabot and could offer a different perspective. The following is condensed from our conversation:

TD: I have this analogy in mind: In music, you sometimes hear of a great violinist who’s technically accomplished, but perhaps his performance doesn’t measure up to another whose playing is flawed but passionate. Is there a term for this? I’m stumbling toward this idea, because I feel like Cabot hit all the right notes, but it didn’t quite move me.

LC: I was just reading [poet] John Ashbery. He’s an amazing technician, but he’s rather dry and cold. Maybe the word is “technician.” An incredible technician is different in some ways to an artist, who can inject things like—I don’t know about words like “soul” and “passion”, but you do notice them in their absence.

TD: You probably have a good sense of why I’m struggling with this—it gets into a realm of subjectivity that’s very hard to describe.

LC: I gave a lecture at NYU last year, and some of the texts that I was studying, like Clement Greenberg’s “Taste”, could be useful. In figuring out how to be a critic, we have to be subjective, and yet we also have to feel like we can recognize what is good.

TD: Or in this case, what’s great.

LC: Right. It’s the key to your quandary. What we find with great works of art is that there tends to be a consensus. But consensus isn’t reached immediately. With golf courses, that can take five, ten years…

LC: Yeah, or Sand Hills. When it opened, everyone was like, okay… But your writing about this from the position that it left you somewhat cold is valid. It didn’t leave me cold at all, for whatever reason. Cabot reminded me of the lower part of Lundin Links, and that’s the golf I love playing. It’s a really fun links. I suspect some probably will say it’s not quite difficult enough.

LC: So your argument is that it’s too technical at times…

TD: I can’t say that chances weren’t taken. The 14th is a 95-yard drop shot to a huge green—I thought it was weird, but I know people who love it. The 4th and 13th share a double green. That could have easily lapsed into cliché, but the execution is wonderful. Maybe that’s an example of what I’m getting at. I just can’t shake this feeling that everything, even the quirk, was so deliberate, so heavily calculated, and that that effort shows itself a bit more than it does on the world’s truly elite courses. It’s a difficult criticism to level.

LC: We’ve disagreed from Day 1. Something about that particular setting felt, to me, like Scotland. Bandon doesn’t—it feels like Bandon. Thinking about Pacific Dunes and Cabot at the same time may be enlightening—there’s something of the magical-fairy-tale-grotto about Pacific, especially the start. There’s nothing like that at Cabot, which is more like the Scottish course that’s part of the town—there’s something more utilitarian and blue collar about it, which I also like, but it’s not magical in that way.

TD: That’s a great point and I completely agree. I think No. 1 at Pacific is a cool hole—it’s a little mysterious. You feel like you’re about to go on an adventure.

LC: I think that’s what they’re going for at Cabot, as well—it’s just more barren and windswept. The first tee at Cabot you know you’re on the edge of a working-class town. It’s another short par-four to a funky little green—not a dissimilar hole, really, but the atmosphere of the two couldn’t be more different.

TD: In all but one or two instances I find it difficult to say, “You got this wrong.” Maybe the routing would have been more interesting if they’d used the ocean frontage differently? All of the holes on the water run in the same direction. I wind up nitpicking because it’s so good, but I wanted it to be even better.

LC: I think you’re also backlashing against the Emperor’s New Clothes aspect. People were saying this was the Great One before it was half built, before they’d even played it, which is certainly asking for a response.

All scramble-brained carping aside, I’d return to Cabot in a flash. Off the course, there is nothing to complain about—the staff is welcoming, the rooms are modern and comfortable, and the food (especially the seafood) is terrific. The fact that Bill Coore and Ben Crenshaw are about to get started on a second course is exciting and will keep the resort in the news, but it will also be interesting to see how Whitman’s course evolves. (The par-three 12th, for example, is already in the process of being replaced with a new hole that gets closer to the water.) There is much to be said for such thought-provoking design, but many visitors will undoubtedly avoid over-analyzing things and simply love it for what it is. “Great” or not, Cabot is a significant addition to the world golf scene–one that any serious traveler should seek out.