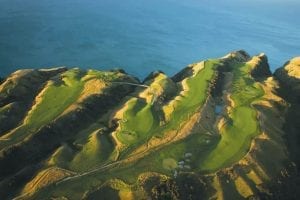 New Zealand is a country rife with outdoor activities ranging from adventurous to downright crazy, so leaving your approach shot in the bunker to the left at the 15th hole at Cape Kidnappers with a drop to the ocean below higher than the Chrysler Building, doesn’t seem out of place. In the United States, legal documents might have to be signed before entering the bunker but this is manly New Zealand and in particular a singularly glorious part of the country: Cape Kidnappers which juts into Hawke’s Bay on the Pacific.

To put some perspective how high up you are at the 15th green, one can skull the approach over the cliff, immediately reach into your pocket for another ball, drop it, take a swing, and the second ball can land before your first ball because ball #1 takes 10 seconds to hit the beach below.

Built over 10 years ago by Tom Doak at the behest of hedge-fund billionaire Julian Robertson, golfers were piqued with Cape Kidnappers from the get go because of the aerial photos of the back nine, specifically, holes 12–16 that lay out over fingers of land along the cliffs. While the eye candy is nearly overwhelming to the senses, the front side has the more interesting holes from an architecture standpoint (in particular holes 1, 3, 4, 5, and 9). Meanwhile, all 18 green complexes are subtle yet endlessly interesting, with the lack of internal contours more than offset by the tilt of the landscape. The fairways range from wide to enormous (80 yards wide) as the wind can occasionally howl giving the player a lot of latitude with a driver on the tee box.

The 15-minute drive to the course through woods and past livestock on the entry road really whets your appetite for the round. One mile before the clubhouse perched on the side of a gentle hill, the lodges and suites of the Farm at Cape Kidnappers blend nicely into its surroundings. The understated clubhouse and polite yet casual employees clearly demonstrate that pretention simply doesn’t exist at Cape Kid. Trepidation melts away.

The course occupies 250 acres on the 6,000 acres of the Cape Kidnappers Station (sheep and cattle ranch). Over six miles of fencing cordons off the Cape Kidnappers headlands from predators thereby allowing the North Island Brown Kiwi (a flightless bird that when it walks brings to mind the image of Groucho Marx’s lope) to repopulate the area. Of even more impressive numbers and a visual spectacle, is that Cape Kidnappers is home to the largest mainland colony in the world of Australasian gannets, a large seabird. Tours are available to bring you within feet of the colony and they’re a real treat to see up close.

This part of New Zealand is also home to world-class wineries, and the town of Napier, 20 kilometers up the coast is a destination for art deco lovers as the town was rebuilt after a 1931 earthquake in the style of the time.

With so many things in common (topography, amenities, outside activities), Cape Kidnappers is very reminiscent of Pebble Beach. You’re closer to the ocean at Pebble and some holes run along the ocean while at Cape Kidnappers you always can see the ocean at either the green site or the tee box but the holes don’t parallel the shore. Both can be walked, though Pebble is a far easier stroll. Both are pricey; Pebble is $500 and a foreign visitor in high season (October–April) will pay close to $400 at Cape Kidnappers.

Comparing which course is better often becomes a pointless exercise, forgetting to consider the subtleties that are part of an overall golf experience: Pebble is often jammed with five-hour rounds and the pervasive cart paths, noise from roads and homes, not such welcome distractions. Three years ago, an avid golfer from Los Angeles didn’t see another golfer at Cape Kidnappers for the day and spent 30 minutes sitting on a tee box on the 13th hole soaking in the experience. And that’s what happens at Cape Kidnappers: you get enveloped by the convergence of only nature and sport and what washes over you is more than the simply the glow of a round of golf.

Of course, if that’s all a bit too metaphysically dreamy, there’s always fun with physics at cliff’s edge.