It’s not often that a parking lot stands out, but the one at Chechessee Creek Club says a great deal about what a unique place the club is. Instead of a big asphalt rectangle on which cars bake all day, the spaces in the irregularly shaped lot in Okatie, South Carolina, are grouped in clusters of three or four, under shady oaks and pines. The landscaping of camellias, azaleas, magnolias and hollies is similarly freeform; there’s no manicured lawn.

A brick walkway leads to a charming, rambling clubhouse. From inside the one-story structure with wood flooring, the shaggy-bunkered course never seems far away. The practice green and range are clearly visible, as are a number of holes.

Welcome to golf the way it used to be.

“So many things these days are so glitzy and fancy,” says developer Jim Chaffin, who with his partner, Jim Light, has developed or been involved with 23 courses over the last 40 years, “that we built Chechessee to remind us of golf’s Golden Era. We wanted it to be about the contextual relationship with nature, about being in the elements. The love of the game was the overriding principle in every decision we made. It was always about the golf.”

Instead of locating the clubhouse along the marsh, for instance, Chaffin and Light reserved that land for golf and put the clubhouse in the middle of the course so play returns again and again. The routing also took precedence over the few cottages and homes. (There are 41 lots, just 20 of which border the course.)

“It’s a special place,” says Paul McEvoy, a partner in a New York City real estate investment firm who joined the club in 2006. “I have been fortunate to play a lot of great places, and Chechessee just resonated with me when I first played it. It’s unpretentious. The course is exceptional, the club is intimate and the service was very high-end. I just embraced it immediately.”

The recipe for this simple yet superior experience starts with the land, which is bordered by tidal marshes and the eponymous body of water, and contains stands of specimen oaks and mature pines. But the secret ingredient was the hiring of minimalist masters Bill Coore and Ben Crenshaw, who are very particular about the sites on which they work.

“It’s Lowcountry, but it’s low key,” says Crenshaw. “It’s a very quiet place to play golf. It’s really that simple. The way Jim Chaffin does his developing is very well thought out. It fit our philosophy very well. From a golf standpoint, it just meshed.” 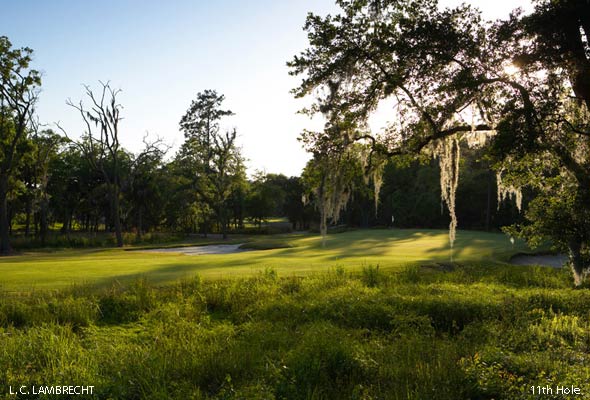 Since they only build one or two courses a year, Coore and Crenshaw spend a lot of time on site and put a lot of sweat equity into their projects.

“I remember Bill building every green by hand himself,” says Managing Partner Franklin Newell. “He would go out with a shovel, rake and a little backhoe called a Sandpro to move the dirt around. On the 15th, one of the more benign greens, he spent 10 hours working on it. He came back the next morning, didn’t like what he did and started over.”

The simple off-white scorecard gives a good indication about what a throwback the club represents. The total distance—6,606 yards—is also very old school. But it’s deceiving, since the par-70 layout has three par 5s and five par 3s.

“People kind of chuckle when they look at the yardage,” says Newell, “and then they come in and say that the scorecard’s wrong. We have four par 4s that are over 440 from the back tees and that’s plenty at sea level.”

The small crowned greens with tightly mowed aprons reminiscent of Pinehurst are the feature that really distinguishes the walking-only course, which opened in 2000. Players have to hit accurate approaches; if not, they need deft recovery games to score well, starting with the 372-yard, dogleg-left opener and 194-yard 2nd.

“It’s fairly short grass that extends away from the green so it can roll off a good ways and then you have an option as to how you want to play it,” says Crenshaw. “Do you putt it, bump it up or hit a pitch? How you score during the day is predicated on those shots, but there are so many options you can get confused as to what type of shot to play.”

Those short-game demands give plenty of sting to seemingly innocuous holes like the 408-yard 4th. Fortunately, the 532-yard 5th is a birdie hole, although the lay-up has to flirt with a giant waste area, while the 178-yard 7th alongside Chechessee Creek may just be the most beautiful hole on the course.

The 336-yard 12th is also on the marsh. It may be short, but the hole demands a nervy drive—a 165-yard carry over an inlet from all but the forward tees. Ernie Ransome, the former Pine Valley president and chairman of the Chechessee advisory board, gets credit for the diabolical little bunker that pinches into the front of the green, which slopes off steeply around it. Says Chaffin, somewhat gleefully: “I’ve seen people putt into it from above the hole.” 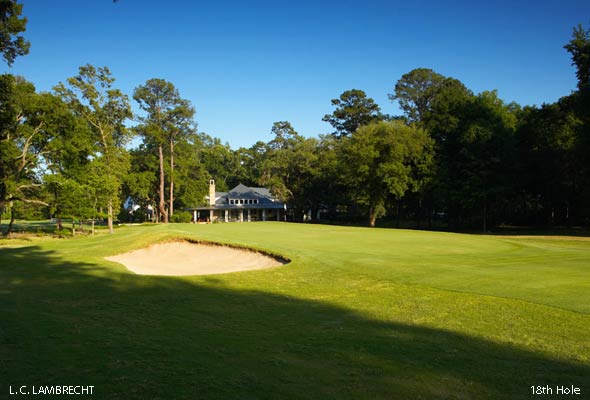 There’s another short hole, the 164-yard 13th, before a trio of brutish ones: the 404-yard 14th, which has a raised bunkerless green; the 602-yard 15th, where players must challenge a large bunker on the right with the second shot to have the best angle into the green; and the 244-yard 16th, which has the largest green on the course, 46 yards deep.

“That’s a big shot so we made a big green,” says Crenshaw. “It’s a change of pace compared to the size of the other greens. It has some expandability to it.”

As good as the course is, the clubhouse is every bit its equal. The two go together like hot fudge and vanilla ice cream. The root influence was the white plantation homes once common in the Lowcountry.

“There’s a lot of attachment to the outside with the amount of glass and the porches,” says the architect, Joel Newman of Thomas & Denzinger, located in nearby Beaufort. “It’s not unusual for clubhouses to get out of hand, for everything to be a little too grand. It was very important to keep it intimate and keep a close connection to the golf course. You’re not above it looking down.”

The club and locale were so appealing to McEvoy, who’s also a member at Winged Foot Golf Club and Wykagyl Country Club in New York’s Westchester County, that he and his wife bought a fractional share in one of the 11 cottages—even though they own a home on Hilton Head Island, about 30 minutes away.

“It’s just a great experience to stay in a cottage,” he says. “We’ll invite other couples, or I’ll do a guys’ trip in April with three foursomes from my other clubs. One of them loved playing here so much that he joined, and some of the others are thinking about it. There’s a certain appeal and character to the Lowcountry.”

At Chechessee, the founders sought inspiration in the past. And as much as the glories of the Golden Age that its lay-of-the-land layout evokes, what makes the club so special is another timeless quality: creating memories with family and friends in a unique environment.

The Members Club at Four Streams