Tagmarshal: Improving Pace of Play at the World’s Top Courses

With two of Ireland’s most renowned golf institutions a mere hour’s drive from Baltray—Portmarnock to the south and Royal County Down to the north—it’s easy to bypass this unremarkable village and its sprinkling of thatched-roof cottages on the estuary of the River Boyne. That’s unfortunate, for here is an authentic seaside links, one of Ireland’s dozen finest courses and one of the top 30 in the British Isles. As European tour pros learned last July, when the Irish Open was played here for the first time, County Louth Golf Club is a strikingly natural and classic sandhills layout that tests and delights at every turn.

County Louth (rhymes with “South”) was founded in 1892, when a transplanted Scotsman named Thomas Gilroy—many early Irish golf clubs owed their formation to Scots—teamed up with a local barrister, George Henry Pentland, who had never played the game. Gilroy had laid out 11 rudimentary holes on rather unpromising terrain at nearby Mornington several years earlier, but he ran into trouble with neighbors who were not sympathetic to this foreign game, and the project was abandoned. Pentland then suggested the dunelands at Baltray and Gilroy was astonished at what greeted him. “Here was I,” he said, “trying to make a course out of poor material when, less than a mile away, there was one of the best pieces of golfing ground in the world!”

The first holes at Baltray, as the course is popularly known, were laid out by Gilroy and a Scottish professional with the curious name of Snowball (about whom we know nothing else). The club prospered from the start, but it was not until the late 1930s that full advantage was taken of its superb linksland. Tom Simpson—principal architect of Cruden Bay, Chiberta, Morfontaine and Berkshire’s two 18s, among others—together with his associate, Molly Gourlay, went well beyond merely updating in order to actually reconstruct the course.

An English barrister-turned-golf architect, Simpson was wealthy, eccentric and flamboyant, emerging from his silver, chauffeur-driven Rolls Royce to walk the construction site clad in embroidered cloak and beret and carrying a shooting stick or riding crop. Gourlay, English Ladies’ champion in 1926 and 1929 as well as a two-time Curtis Cupper, may have been the first woman golf course architect, or at the very least, the first woman to earn money in the profession. Simpson and Gourlay collaborated with considerable success in Ireland, also remodeling Ballybunion and Carlow. For their services, Simpson charged County Louth £40, a sum that would scarcely cover a tuneup for the Rolls.

The par-72 layout measures 6,936 yards from the tips, 6,676 from the medal tees. In season it plays firm and fast, the game along the ground being almost as essential to good scoring as the game through the air. With its sand-based fairways ranging from rippling to tumbling, its imaginative routing through the dunes, the remarkable diversity of its brilliant greens (Simpson strove to provide 18 absolutely individual putting surfaces, and he succeeded) and the number of truly great holes (not less than six), Baltray is everything a world-class links should be.

From the first shot here, the game is on. The 433-yard opener, the No. 3 stroke hole, begins with a drive into sloping, hummocky ground corseted left and right by penal bunkers. Then, as it swings easily left, the hole calls for a long second shot over a gentle rise that hides another pit, this one some 15 yards short of the green and solidly in the fairway, to snare the underhit long iron. The green falls off to the right. It’s one of the most exacting first holes you are ever likely to encounter, in a class with the openers at Oakland Hills, Royal St. George’s, Aberdovey, Pine Valley and Oakmont.

Two memorable one-shotters on the outbound nine, the fifth (173 yards) and the seventh (163 yards), play from lofty, wind-exposed platforms across swales to plateau greens defended in both cases by a gathering of bunkers and steep falloffs. These short holes bracket an altogether splendid par-5 that dipsy-doodles its way for 531 yards to a green stunningly sited on a knob with more of those dreaded falloffs.

A trio of consecutive par-4s on the inward half—12, 13 and 14—weaves through tossing duneland beneath a range of towering sandhills along the Irish Sea. Each of the first two—410 and 421 yards, respectively—requires a long second shot fired through a narrow gap in the dunes to a sheltered and barely visible green. The 14th, nearly 100 yards shorter, is the personification of sporty, with its teasing pitch to a small plateau green partially concealed within the dunes. It is on the pinnacle tee of this 14th that the golfer instinctively takes a deep breath as his gaze encompasses the broad tawny beach, the gray-green sea and, on a crystalline day, the lovely Mountains of Mourne looming some 40 miles up the coast.

The round comes to a close with a strong, straightaway 559-yarder. A couple of pesky pot bunkers smack in the middle of the fairway, one of them 100 yards short of the green, the other 50 yards closer, imperil the second shot and can peremptorily transform the dream of a birdie into the reality of a bogey. 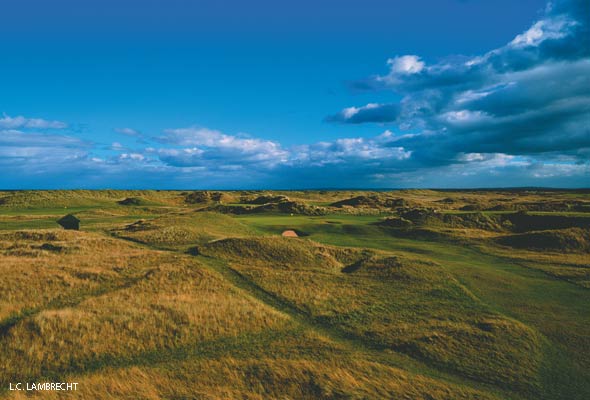 During the middle decades of the 20th century, Baltray’s reputation was advanced by a pair of outstanding lady golfers, Clarrie Tiernan and Philomena Garvey, both of whom learned the game as children on the links here. Tiernan (later Mrs. Val Reddan) won the Irish Ladies’ Championship in 1936. In 1938 she became the first Irishwoman to be selected for the Curtis Cup team, and in 1948 was chosen again. Garvey’s record is even more impressive: six-time Curtis Cupper between 1948 and 1960; winner of the 1957 British Ladies Amateur at Gleneagles (runner-up for the title on four other occasions); and 15-time Irish Ladies’ champion between 1946 and 1970. The first of those Irish Ladies’ wins came when she defeated her lifelong friend, neighbor and clubmate, Clarrie Tiernan Reddan, on the 39th hole at Lahinch.

The club also gained renown courtesy of the East of Ireland Amateur Championship, which it founded in 1941 and still hosts today. The late Joe Carr (Ireland’s greatest amateur, with 11 Walker Cup appearances and three British Amateur titles) managed to win it 12 times between 1941 and 1969—and the 1970 winner was his son, Roddy.

Twenty-five years after Carr’s final East of Ireland win, Donald Steel related a charming tale in his book, “Classic Golf Links of Great Britain & Ireland.” Carr, playing in a purely social game at Baltray, had on his bag a young caddie who was ignorant of his man’s achievement. Carr was struggling, which prompted the caddie to ask, “Ivir plait here before?”

“Did yer ever play in the East of Ireland Championship?”

“And did yer ever do any good?” the boy persisted.

“I won it 12 times,” said Carr with a modest nonchalance, thinking he might have the last word.

“Well,” concluded the boy, “the standard must have been much worse in your day.”

The standard was plenty high at the 2004 Irish Open, where the field included Ryder Cuppers Padraig Harrington, Darren Clarke, Miguel Angel Jimenez, Paul McGinley and Luke Donald. The winner was an Australian, Brett Rumford, who held off Irishman and crowd favorite Harrington to win by four at 14-under-par 274.

An unusual circumstance marks the end of any round at Baltray: The clubhouse is nearly 300 yards from the 18th green, a walk that allows ample time to anticipate the pleasure of a meal or a beverage at this warmly welcoming club. Formerly known as the Golf Hotel, the clubhouse offers 10 small and spartan rooms for overnight guests. The bathroom is down the hall. And if a party is not underway downstairs—these accommodations are scarcely sound-proof—you sleep the sleep of the blessed, to be awakened the next morning by a knock at your door and word that breakfast is served. It turns out to be a full Irish breakfast, of epic proportions—just the thing to fortify yourself for another round on this great and noble links.