In most sports, playoff venues are determined by the teams who qualify for them: places like Yankee Stadium, Lambeau Field, and Boston Garden. But the FedExCup Playoffs are different. Nineteen different courses have hosted the PGA Tour’s season-ending playoff series. Up until 2019, players did battle over four different courses each year en route to the final payday. Since then, it’s just been three events on three courses. The one constant has been East Lake Golf Club, which has hosted the concluding playoffs event since their inception in 2007.

The same is true in 2022, but the two courses hosting the first two stages—TPC Southwind in Memphis and Wilmington Country Club in Delaware—are new to the FedExCup. Both provide stern tests for the players who’ll be vying for the ultimate prize: $18 million (and a shiny trophy).

Here’s a look at the three courses hosting the 2022 FedExCup Playoffs.

TPC Southwind, host of the first leg of the FedExCup Playoffs, is a course located in an upscale gated community in southeast Memphis. TPC Southwind has served as host venue of the St. Jude Classic and the WGC-FedEx St. Jude Invitational in year’s past, but this is its first time welcoming the FedExCup circus to town. The 7,244-yard course was designed by Ron Prichard, with advisory assistance from Hubert Green and Fuzzy Zoeller. It is one tough track. Its phalanxes of mature trees, undulating zoysia fairways, slick greens, and numerous lakes, ponds, and streams give players all they can handle.

The fairways are tight here, and many holes dogleg—making control off the tee important. The 481-yard par-four 7th hole, for example, has trees to the right and bunkers on the left that pinch the landing area to the width of a FedEx truck. At the 12th, a 383-yard par four, there’s a lake running all the way down the right side that players have to avoid. Many players hit irons off the tee there, as well as at the short, par-four 15th. Accurate approach shots are equally necessary. Several of the well-bunkered greens are crowned with steep runoff areas, and eight of the greens are protected by water. Nowhere is this more in evidence than on two of the par threes, including the 155-yard 11th with its island green that closely resembles the 17th at TPC Sawgrass.

The long, par-four finishing hole at TPC Southwind always generates fireworks. It was there that Dustin Johnson dropped a walk-off eagle on the field to clinch the 2018 FedEx St. Jude Classic. Players who successfully negotiate the water all along the left side of this dogleg-left monster will come out on top. 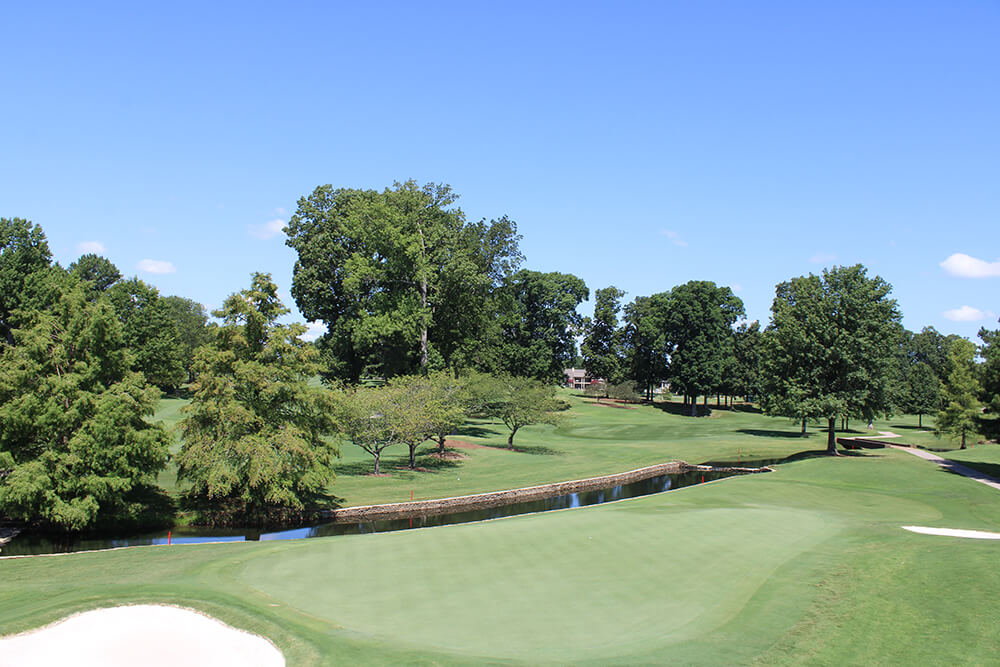 History is on the line, in more ways than one, at the BMW Championship on the South Course at Wilmington C.C., a classic, treelined Robert Trent Jones Sr. design that can stretch to more than 7,500 yards. The event is not only the first professional golf event to be held at the club—it’s the first time a PGA Tour event has ever been held in Delaware.

The top 70 players (and ties) making it out of Memphis need to have solid sand games, as the course is defended by deep, white-sand bunkers just about everywhere you look. You can expect the rough to be a factor, too, beginning at the first, where players may be tempted to try to cut the corner of the dogleg to shorten their approach to the green. Look for a back hole location on Sunday, as the green narrows to almost nothing in the back-left corner.

Sharply sloping greens like the 47-yard-deep green at the par-three 2nd, the hourglass-shaped green at the par-four 5th, and the wildly tilted green at the par-four 13th test players’ putting games, too—as does the fact that many of the greens feature multiple levels with ridges running through them. The short 11th is one that won’t require more than a short iron into the green, but it’s dissected into two halves, with the back half running away from the player. Accuracy is key to scoring well here.

The finishing hole at Wilmington South, like at Southwind, has seen its share of last-inning drama. Canadian Gary Cowan holed out from the rough there to win the 1971 U.S. Amateur. Players find a small half-bowl in the front of the green and a sloping rear section that will make final-round putts there even slipperier than they’d otherwise be. Expect knees to be knocking come Sunday.

Who This Course Favors:

Atlanta’s East Lake G.C. is a shrine to Bobby Jones. Jones was in attendance at age six when the original Tom Bendelow-designed course debuted, and he was a fixture at the club throughout the rest of his life. All four of Jones’s Grand Slam trophies are on display there, along with a veritable museum of other Jones memorabilia.

The course has twice been updated—first with a Donald Ross redesign in 1913 and again in 1994 when Rees Jones restored the course to better reflect Ross’s original layout, which had steadily eroded over the years.

The 30 players who make it to the FedExCup finale are likely to confront brutal rough at East Lake, but the fairways are relatively generous. What they won’t get is much roll. The normally soft zoysia fairways here and the many bunker placements in front of greens make East Lake a course where aerial golf is the order of the day.

While the opening holes at East Lake are not overwhelming—with the 3rd, 4th, and 5th holes increasingly longer par fours that play parallel to one another—the course comes into its own at the 6th, an uphill, dogleg-right par five that should be a birdie hole for most of the field.

The course tips out at over 7,300 yards, so while it’s not a monster in terms of length, long-ball hitters should certainly have an advantage. That said, shorter-hitting Zach Johnson holds the course record; he shot a 60 (10-under) at the 2007 Tour Championship. So, it’s not just brawn that’s rewarded at East Lake.

Up until 2016, the course ended with a devilishly difficult, 235-yard par three that yielded an average of just over two birdies per round. But that year they flipped the nines, and ever since the event has finished on a 600-yard par five that’s easily reachable for most players under the right conditions. Look for this year’s FedExCup to go down to the wire—as it did so dramatically in 2021 as PGA Tour Player of the Year Patrick Cantlay took a one-stroke lead over Jon Rahm to the last hole and stuck a 6-iron close enough to give himself a two-putt birdie and clinch the win.

Who This Course Favors:

The 9 Best Twilight Golf Rounds You Can Play in the U.S.