This series from LINKS follows exciting new courses and renovations around the world. Let us know in the comments below if you know of courses that should be featured in the future.

Pinehurst Resort, No. 4, Pinehurst, N.C.
Gil Hanse has been selected to renovate the Donald Ross-designed No. 4 course at the iconic resort. While the original footprint of the course has been lost to development, Hanse will aim to recreate as much of the 1919 design as possible from Ross’s drawings and period photographs. The course will share the look and feel of the renovated No. 2 course, including less rough, more native areas, and wider fairways. “Pinehurst No. 4 was a Ross original course that many designers altered over the past 100 years,” said Pinehurst President Tom Pashley. “Gil Hanse is one of the most talented golf architects in world and he has an ability to bring out the natural character of a site while adding artistic emphasis… He’s the right combination of artist and historian to bring out the best in Pinehurst No. 4.” The work is set to begin in fall 2017 and be done by fall 2018. 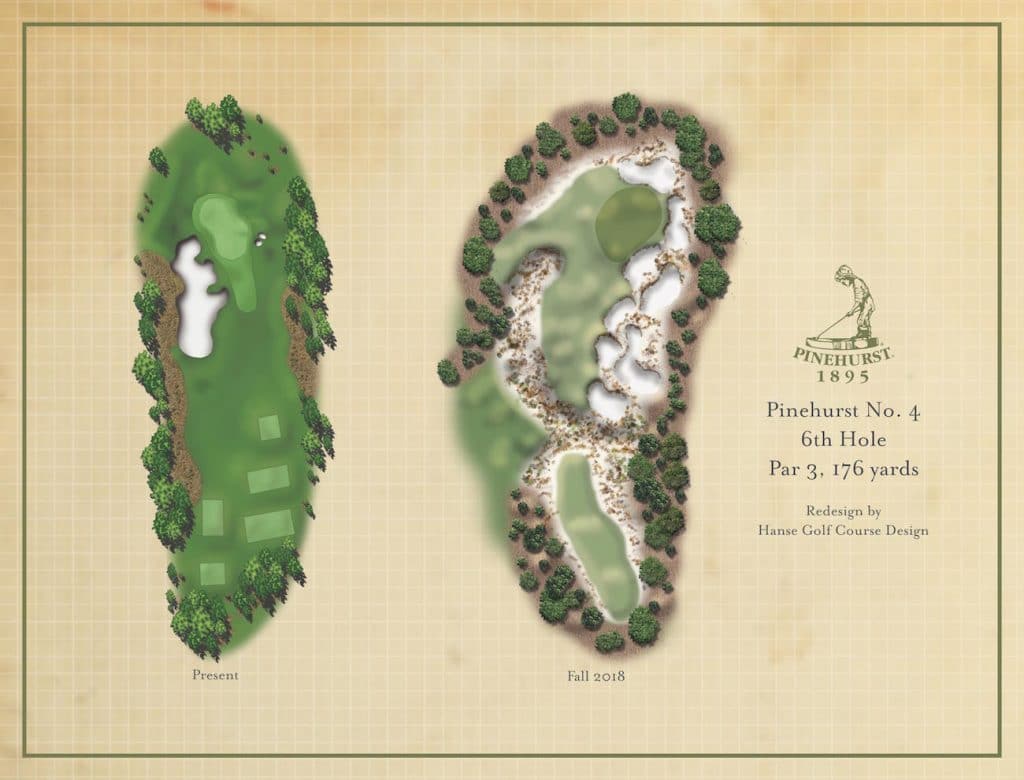 Kiawah Island Golf Resort, Cougar Point, Kiawah Island, S.C.
Following renovations at all of Kiawah’s other resort courses, it’s now Cougar Point’s turn for an update. Gary Player Design, the original architect, is returning to re-grass the course with Paspalum, rebuild all the bunkers, level all the tee boxes and practice range, and update the irrigation system. The course closed last November and is scheduled to open this coming October.

Greenbrier, Greenbrier Course, White Sulphur Springs, Va.
The Greenbrier Course was spared serious damage during the terrible flooding last June—only a few holes were affected—but the resort is using the opportunity to have Phil Mickelson and his team do a complete redesign. The stated goal is to revive many of the design elements from the original course, which was laid out by Seth Raynor in 1924. Work is set to begin in early 2017 which the goal of reopening in spring 2018.

Streamsong Resort, Black Course, Polk County, Fla.
I visited Streamsong a few weeks ago to tour the Black Course, and I can report back that it will live up to the hype. The course will open on September 28 after two full growing seasons to get it ready. The Gil Hanse design will have its own clubhouse nearly one mile from the clubhouse that serves the Red and Blue courses. The course, patterned after the Sandbelt courses of Australia, will be wide open with few trees and play to a par of 73. A short course / practice area called the Roundabout is a new amenity next to the Black Course that has six greens and an array of teeing options so golfers can do everything from play short par 4s to work on their short games. Streamsong is currently taking advanced bookings for the Black Course.

Hammock Beach Resort, Ocean Course, Palm Coast, Fla.
Another course damaged by the wind and storm surge of last October’s Hurricane Matthew is turning that negative into a positive. The Ocean Course, a Jack Nicklaus Signature design, will be redone with all-new, salt-tolerant Platinum Paspalum everywhere, plus reconstructed tee boxes, bunkers, and green complexes. Look for a reopening in October 2017.

What courses would you like to see featured in this series? Let us know in the comments below!