Like the jewel in its name, Diamond Creek was cut to be something special—and also different. For example…

The man most responsible for defying private-club convention—while running a first-class operation—is John McNeely, who partnered with Wayne Huizenga to found Diamond Creek in 2003. (Huizenga also owns Frederica, on St. Simons Island, Georgia.) In his previous life, McNeely was a golf professional at a number of top private clubs, including New York’s Winged Foot (where he was tutored by the legendary Claude Harmon), Thunderbird in the California desert, The Floridian, River Oaks in Houston, and Grandfather Golf and Country Club, just a few miles from Diamond Creek in the verdant mountains of western North Carolina. So he knew that when he went out on his own it had to be for something unique.

“There are many great clubs up here, but most of them involve buying real estate and joining,” explains McNeely. “Wayne and I felt there was a chance to build something different, not a country club but a golf club.” 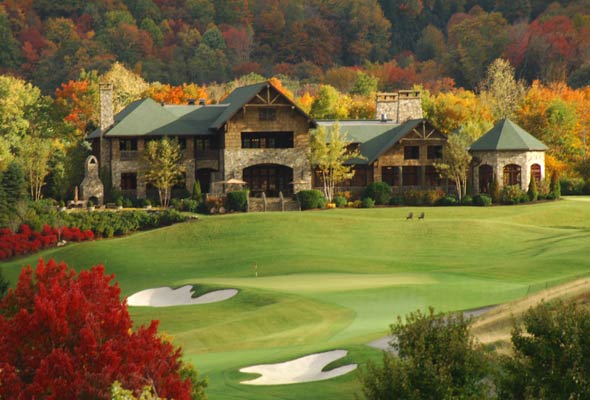 After finding the land—a former sheep ranch tucked in a secluded mountain glen near the vacation village of Banner Elk—McNeely drove two hours south to Hendersonville, where Tom Fazio makes his home and office. McNeely didn’t talk to anyone else: He wanted this to be “a home game” for Fazio, who has since become a close friend of the two founders.

The architect also created something different, a mountain course—altitude 4,000 feet—with minimal elevation change and an emphasis on firm, fast conditions. He accomplished the former by relocating one million cubic yards of earth and placing most of the uphill and downhill movement, about 250 feet in total, between the holes rather than on them. As for the latter, the bentgrass fairways are sand-dressed so they remain dry, healthy, and nearly as quick as the greens, which are lightning-fast and rife with waves and undulations. (When out-of-town members call to arrange visits, their usual first question is, “How fast is it playing?” The usual answer: Very.)

Most of the holes at Diamond Creek run north-south, parallel to the surrounding hills while limiting sun glare in golfers’ eyes. The course covers a lot of ground, with each location providing a different view of the mountains: In one direction sits Sugar Mountain; from another spot appears Beech Mountain; off in the distance are Roan, Big Hump, Little Hump, and Green Mountains; and high overhead loom the rock outcroppings known as Four Diamond Ridge, where the creek that gives the club its name begins.

Fazio devised clever ways of bringing the elevation into play while keeping most holes fairly level. The driving range, teaching center, and first few holes are at the course’s highest point, so any uphill exertion—more likely to affect the cart than the golfer—comes early in the round. (The course was built to be walkable, so, in McNeely’s words, “if you walk your home course, you can walk ours.”) The clubhouse sits in the middle of the property and is primarily visible from the front nine; when the golfer sees it, he usually is looking down on it, a much more pleasant—and comforting—perspective. 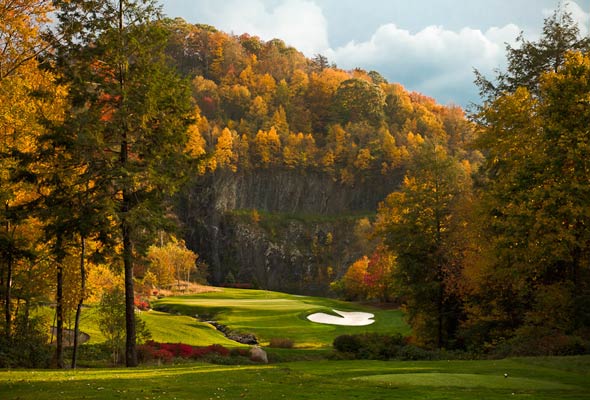 Only 42 bunkers were built because, says Fazio, they weren’t necessary to create “wow factor”: Nature provided that on her own.

Six of those bunkers are on the par-four 6th hole, grouped together on the right side to direct tee shots toward the left where there’s an entrance to the green. However, the fairway, which climbs slightly uphill, slopes left to right, and any approach from the low side means having to come in over a beach-worth of sand to the narrowest part of the putting surface.

Number 7 is one of three par fives (par is 70), and one of the few holes with a significant downhill drop. But spread over 500-plus yards the severity of the descent is muted. Off the tee, the fairway angles and slopes left toward a wide, safe landing area—yet the further left the drive lands, the harder it becomes to find the green to the right.

The front side is the more spacious because it’s where the sheep once grazed. After the turn, holes tighten and trees come more into play, but Fazio continues to work with nature to keep the golfer on his toes. At the short, par-four 11th, the small green seems to float at the end of the earth, nothing behind it but mountains. The vast scale of the surroundings and the infinity view off the back edge make it difficult to trust the yardage.

The course’s low point—in elevation, not drama—is number 17, a mid-length par three over water to a green backstopped by a forbiddingly beautiful rock wall. After that it is almost a relief to play back up the final fairway, the creek lining its right side, to the sanctuary of the clubhouse.

In the mountains the season is only six months long. Half the membership is national, coming in for a few days or weeks at most, and enjoying many of the region’s other outdoor
attractions, such as hiking, fishing, and biking. According to McNeely, autumn is busier than spring (the spectacle of changing leaves is a sure thing; early-season weather not quite as reliable). There’s even winter skiing nearby, although no one is going to confuse the Smokies with Sun Valley or St. Moritz.

On property, members can take aim at shooting clays, 10 stations arranged along an open field and into the forest. The club also has an equestrian center with half a dozen horses for trail-riding, a wellness center, plus a burn pit and other under-the-stars amusements such as the Shanty, an alfresco bar and dining area.

But the emphasis remains on golf, just the way Messrs. McNeely and Huizenga planned it. And yet…

At the top of the clubhouse stairs is a book-lined lounge. On one of the walls, hidden behind a piece of sculpture, are five framed 18th-hole flags from another special club, Augusta National. Each is signed by one of the five men to win the Grand Slam: Gene Sarazen, Ben Hogan, Jack Nicklaus, Gary Player, and Tiger Woods.

Anywhere else, such prizes would be front and center. Not at Diamond Creek, where the difference is discernment.

The Ultimate Test of Patience: Pinehurst No. 2

How to Choose the Best Golf and Ski Community for You