Few people appreciate golf’s history and traditions the way Ben Crenshaw does, as both designer and player. He was at one of the game’s most hallowed venues, Augusta National Golf Club, during the 2003 Masters, when he learned of a unique project near another special address for golf: Pinehurst, North Carolina.

Tears welled in Crenshaw’s eyes as he heard about the proposed golf-only club, to be known as Dormie Club, and envisioned working in the North Carolina Sandhills, an area on which he always had wanted to leave his mark. This sentiment matched that of his longtime design partner, Bill Coore, who had grown up in the area.

But first, Coore and Crenshaw needed to visit the site to determine whether it would yield the kind of minimalist, classic layout that has become their trademark. So for hours, the duo walked the former quail-hunting retreat outside Pinehurst, the way they had trekked across the Nebraska countryside before designing Sand Hills Golf Club and the Long Island dunes before building Friar’s Head.

Coore and Crenshaw “found” 14 potential holes that day, recognizing the value of the 1,100-acre property the way the club’s founders had when they set out to build the course. An integral component of their plan was the hiring of Coore and Crenshaw, and had the pair declined the assignment, Dormie Club might never have been built.

Years later, Dormie Club is finally open, fulfilling the owners’ vision of a natural-looking course that moves up and down 110 feet of elevation changes while wending through and around pines, mature hardwoods and a pair of lakes. The 6,988-yard layout blends seamlessly with the native Sandhills landscape of wiregrass and sandy scrub areas, without manicured edges or defined rough. 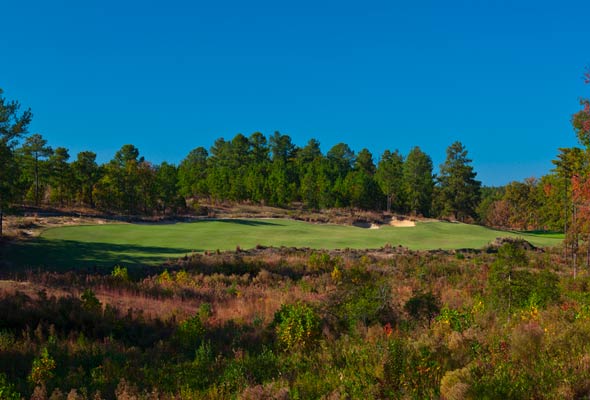 Fittingly, the course is based upon the timeless design principles espoused by Donald Ross, who lived in Pinehurst.  The transplanted Scot believed a course should be designed with width, which provides several options for players. Holes would reward tee shots to a specific portion of the fairway, while a strayed drive affords an opportunity for a recovery, albeit with some difficulty.

Much of modern course architecture has been missing this key strategic element, but the throwback Dormie Club has restored this Golden Age philosophy with generous hole corridors providing multiple angles to the green, as well as large chipping areas that demand thoughtful shot selection and precise execution, whether the player chooses to hit a flop, a Texas wedge or anything in between.

The designers and founders make this old-school approach apparent from the opening hole, which has a wide fairway guarded by two cross bunkers. No hole in golf offers more options than a short par 4, and Coore and Crenshaw showcase their genius on the 316-yard 3rd hole.

Meandering downhill from the elevated tee before climbing to a green tucked into the hillside, the hole looks as though it has been there for centuries, waiting to be uncovered. The green looks like the moon’s surface and yet looks so natural, with an array of bumps and knolls guarded by several wild bunkers that erode into the surrounding woods.

The 440-yard 4th drops roughly 55 feet from tee to green, while the 435-yard 5th features a tee shot over the corner of a lake. The 532-yard 6th has 15 bunkers, although most are only visible if you are near them, and it plays uphill to a hog’s-back fairway toward the heavily bunkered green. The 477-yard 8th is another gem, with the elevated fairway following the curvature of the lake to a large green that is 50 yards deep.

Another archetype missing from today’s courses is the short, fun one-shotter, and Dormie Club has two enviable examples. The first is the 173-yard 9th, which often measures shorter than the printed yardage and plays over wetlands to a tiny green, perched on a hill and guarded by a pair of rugged bunkers. According to a founder, the 9th is one of the clearest examples on the course where it looks as if green carpet were simply laid over the land. 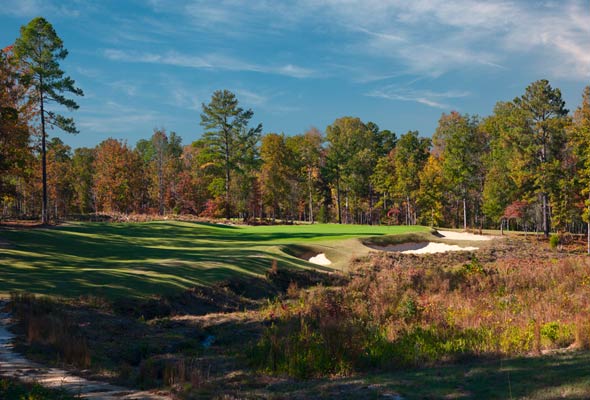 The next is the 118-yard 12th, which is destined to be, yard for yard, one of the most memorable holes in golf. Sitting perfectly in its surroundings, the hole plays slightly uphill over a sandy waste area to a green that runs away from the tee. Guarding the right side of the green are two bunkers of varying heights that provide visual discomfort. Despite having a wedge in their hands, golfers will be glad to make par.

More options await at the drivable-yet-treacherous 307-yard 14th, the Cape-style 384-yard 15th and the 506-yard 17th. This remarkable hole rises slowly from the tee to a fairway guarded by two bunkers left and one right before climbing sharply, over a bunker that pays homage to “Hell Bunker” on the 14th hole at the Old Course at St. Andrews.

As a final testament to the routing conceived by Crenshaw and Coore, there are no par values on the scorecard, simply yardages. “Par is really an arbitrary number,” says Director of Golf Paul Oglesby. “So many of the holes here play differently each day, depending on conditions and time of year, that it doesn’t make sense to put down a set par for each hole. In the end, your score will be your score, regardless. That’s the way golf is supposed to be played.”

In fact, everything about the club pays homage to the greatness of the game, starting with the name. According to a founder, the term “dormie” originally meant having reached a point in one’s life at which nothing could go wrong. So the goal of the club is to provide a sanctuary where members could get away, play golf and enjoy the camaraderie—a place where nothing could go wrong.

Despite opening during a tumultuous economic climate, the founders have planned for a long-term future. The course is open for select non-member play for the next two years (with flexible membership options), after which the club will remain private. Future plans include a modest clubhouse, fitness center, par-3 course and guest accommodations.

The club is also planning an amenity for history buffs. Members will be able to use the original Donald Ross house for special events and functions.

To be sure, all these developments will take place with the same attention to golf’s traditions found throughout the masterpiece of a course that fits perfectly within the landscape of Pinehurst, one of the most historic, most revered, most visited golf destinations in America.

The Golf Club at Sacconnesset

The 10 Most Historic Clubs in the U.S.