Some golf clubs are built as monuments to their owners. Others are built to sell real estate. But Eagle Point was built to promote enjoyment of the game. That the founders would choose bentgrass over bermuda for the greens speaks volumes about what this Wilmington, North Carolina, club strives to be.

Most courses in the South use one of the new dwarf bermudas, which are terrific, many people likening them to bent. But one trip around Eagle Point and the comparisons go out the window. Planted with a heat-tolerant strain called A-4, the club’s bentgrass greens are simply the best in the state, if not the entire region. Putts hug the ground so closely and balls have so much roll-out that it’s easy for any golfer to tap his inner Crenshaw.

“We wanted a golf club where people could enjoy the game on a world-class design without starting times, a place where they could entertain friends or business acquaintances in a very private atmosphere,” says one of the visionaries, Billy Armfield, who also served as president for 10 years. “We wanted a well-funded club so we could maintain the course in pristine condition and we felt that bent is the best putting surface available.”

In addition to having a terrific superintendent who knows how to care for the greens, Eagle Point’s location less than a mile from the ocean is a huge help in keeping them healthy: air movement is critical and there’s usually a good breeze even in the hot summer months. Airflow, as well as vistas, also  improved with the recent removal of more than 100 trees between holes on the front nine.

In addition, the sandy, 229-acre site drains quickly and allowed Tom Fazio to sculpt the design. “We took the land that was high and made it even higher,” the architect says. “We created contours in the ground where the balls would feed and bounce toward play and toward the fronts of greens.”

Fazio describes Eagle Point as “a golfer’s golf club.” The membership is national in scope, with most of the lucky 400 living more than 50 miles away. Many come from the major Southern cities, such as Atlanta, Charlotte, and Richmond, but there are also a handful from New York and even farther afield. Typically, the club takes care of transportation to and from the Wilmington airport; once on property, out-of-towners and their guests stay in one of two spacious cabins, each outfitted with four master suites that can easily sleep an eight-some. Located along the scenic 9th fairway, each cottage has a pool table, a big flat-screen TV over the fireplace, and a deck with a gas grill and rocking chairs. (They’re also outfitted with a healthy selection of Scotches, cigars, soft-baked cookies, and high ceilings perfect for anyone planning to work on his swing into the night.) 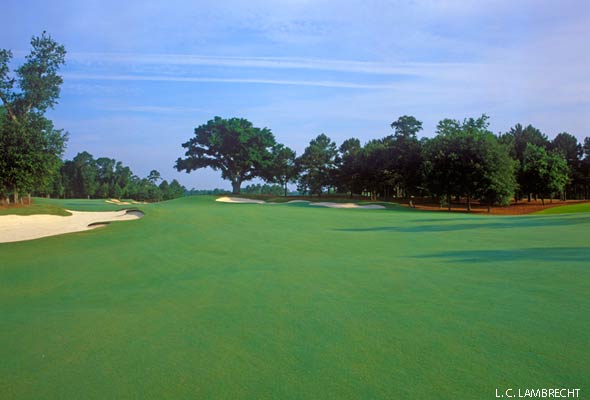 The cottages are a short walk from the expansive practice range, where clubs and caddies will be waiting as soon as the sun comes up. Although not a walking-only club, strolling is encouraged and riders must take a caddie to help support the caddie program. Fortunately, it’s a very enjoyable walk.

The first four holes ease players into the round: There are birdies to be caught at the 598-yard 4th if tee shots reach the big downslope in the fairway. The next hole is a challenging par three that plays over a lake to a green with a big bunker to the right and a lot of falloff to the left. The par-five 6th is the number-one handicap hole thanks primarily to the creek that runs along most of the left side, cuts across the fairway about 200 yards out, then hugs the right side of the hole before finishing in a big pond behind the green.

During tournaments such as the Eagle Point Amateur Invitational—which attracts some of the best mid- and senior amateurs in the region each October—the club often moves up the tee on the short par-four 7th to tempt players into going for the green. However, the putting surface features so much fall-off that even good players have to give it a long think before giving it a go. 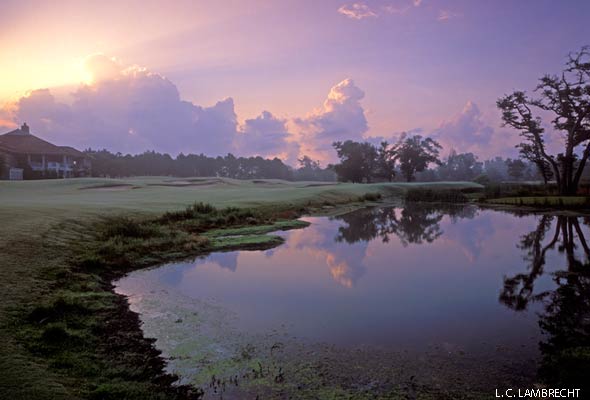 Hosting the Invitational is indicative of the club’s philosophy. “Our board wanted to give back to amateur golf and create a tournament environment in the spirit of the game,” says Director of Golf Billy Anderson, who has been at Eagle Point since before it opened in 2000. “They love to have great players here. It creates atmosphere and camaraderie, and that’s what the club’s all about.”

Good players, like tour pros Webb Simpson and Carl Pettersson, who are members, love the variety that Fazio built into the course. While the first eight holes are reminiscent of the North Carolina Sandhills, the next few are more South Carolina Lowcountry. Marsh lines the left side of the 431-yard 9th, with a drive from the back tees having to carry a good portion of the hazard. Perhaps the prettiest view on the course is from the elevated tee on the 186-yard 10th, taking in the marsh and the river behind the green all the way to one of Wilmington’s bridges.

The 412-yard 11th is the course’s only true dogleg, with a majestic, 130-year-old hackberry tree at the outside corner providing the perfect aiming point. Birdie chances are few and far between on the back, the best one coming on the downhill par-five 12th: Long hitters should be able to reach the narrow, angled green fronted by a lake, especially if they can catch the left-side slope and run the ball on. The other par five, the 580-yard 18th, also features a narrow, angled green and a lake on the right, but that’s where the similarities end. Going for the well-guarded green in two is a risky proposition and even a short third shot is no cinch. A par there will make lunch taste that much better in the comfortable men’s locker room.

This being a true player’s club, the golf isn’t done at round’s end. After a bite to eat and maybe a shower, most groups head back outside to tackle the nine-hole par-three course with a six-pack in tow, exchanging barbs and money. Fazio designed the short course with no hole under 100 yards and one at 220. The rounds and the razzing out of everyone’s system, it’s time for dinner in the wood-shingled, Cape Cod-style clubhouse.

“The people who started the club had a vision for golf in its simplest form,” says Anderson, “and we have a great membership that appreciates that vision. We’re pretty low-key. It’s a great atmosphere. People can take their hat off and be themselves when they’re inside the gates.”

Be themselves and be at one with the game they love.

All 18: A Photo Tour of Congaree Golf Club