7 Exceptional Holes that Bring the Ocean into Play

One of Elk River Club’s members has waded into the club’s namesake that runs along the 509-yard 16th, a reachable par five that is awash in risk-reward. He’s not in there looking for his ball, although many second shots do end up in the water, given how closely it hugs the hole on the left and the temptation to go for the green in two. No, the river has its own allure: world-class fly-fishing for brown and rainbow trout.

Architect Jack Nicklaus used the river—a half-mile of which runs through the middle of the course—to great effect. The Elk, which underwent a bank restoration in 2007 and deepening in 2012, first comes into play along the left side of the dogleg-right, par-five 6th before running down the right side of the 418-yard 9th and cutting across the fairway about 80 yards from the green. After meandering past the clubhouse, the practice green, and in front of the 18th green, the river then runs hard by the green of the short, par-four 10th and then the 16th before exiting on the southeast end of the property by the runway (the club has its own 4,600-foot airstrip).

“We were able to use the river on several occasions in the strategy,” says Nicklaus. “On top of the aesthetics, the course has some really good golf shots on it. While technically a mountain golf course, Elk River is a relatively flat course. We were really pleased with how it turned out.” 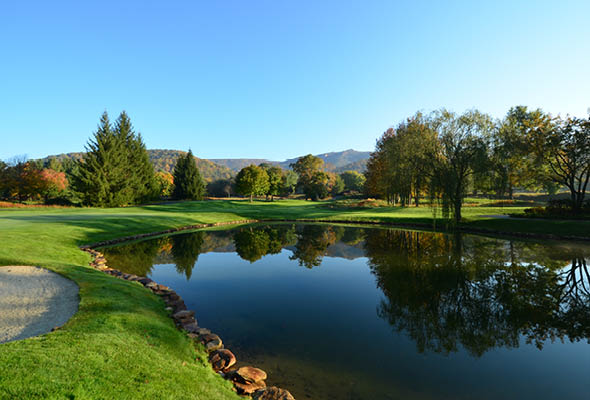 Located on the outskirts of Banner Elk, N.C., Elk River is really a tale of two nines. Some elevation change is nice, but at many mountain courses it’s often a case of too much of a good thing. Not so here. The front nine has an open, meadow-type feel with tall native grasses lining the holes, while the back is a more traditional tree-lined mountain design, with greens cut into hillsides, downhill tee shots, and small streams wandering into play. Also, other than the 390-yard, par-four 4th and 424-yard, par-four 5th, which both border the runway (where it’s pretty neat to see private planes landing or taking off), the holes continually switch direction.

Like most Nicklaus courses, Elk River is a second-shot course. With relatively wide fairways, the real character lies in the approaches to the fast, undulating greens, which typically run at nearly 12 on the Stimpmeter. The short 13th plays to an elevated, almost blind two-tiered green that gets your attention even with a wedge in your hands. Add a quartet of challenging and beautiful par threes and Elk River is easily one of the best mountain courses in the Southeast.

The course—which opened in 1984—was treated to a complete restoration of the irrigation system, topsoil, tees, bunkers, and greens 10 years ago, but the design has stood the test of time. A small renovation in 2007 re-contoured the native grasses to make them more visually appealing and player-friendly, while the removal of some trees opened up sight lines and helped to maintain the immaculate turf conditions.

There’s nothing quite like hitting approach shots off perfectly maintained bentgrass fairways. Then to watch the ball fly toward the target against a verdant mountain backdrop, well, there aren’t many prettier sights in golf.