When Cabot Links opened three summers ago on the western side of Nova Scotia’s Cape Breton Island, golf aficionados rushed there for a true-links experience along the Gulf of St. Lawrence and pronounced the course a winner.

Back then, only a few people—including Cabot founder Ben Cowan-Dewar and his partner, Mike Keiser, the man who created Bandon Dunes—knew that a mile up the road was perhaps the most exciting golf landscape of our generation. They entrusted it to Bill Coore and Ben Crenshaw, and the resulting Cabot Cliffs, which opens in July, is simply phenomenal, a modern masterpiece that is more than enough reason to make the long trip. (The closest commercial airport is Halifax, a 3½-hour drive away. Hopes are that will change soon.)

The course sits high above the gulf, and features two distinct topographies. The front nine plays up and down, through mammoth dunes and vast sand blow-outs reminiscent of Ireland. But that’s just the warm-up. It’s the back that truly awes, much of it traversing the towering bluffs, swooping to and from the water. Ten of Cliffs’ holes are on the gulf, but the water is always in view. In fact, Cabot may be the only two-course complex in the world where water is visible from all 36 holes. 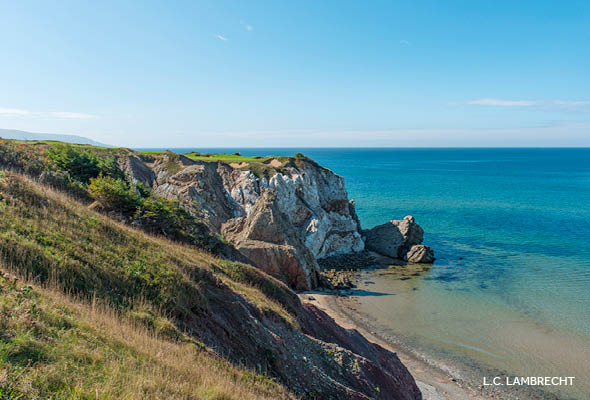 Heart-pounding, throat-clenching, sphincter-tightening—every bodily adjective applies, especially at the par-three 10th and the par-four 17th, both demanding gut-wrenching shots over nothing but rock, water, and air. The challenge is exaggerated by the terrain’s dramatic scale, which does something to depth perception: As Coore told me, this is the rare course where distances seem greater, rather than less, than they really are.

At Cabot Cliffs, everything is greater. In fact, we need a greater vocabulary to find words to describe it. Till then, try this one: Wow!