8 Ryder Cup Courses You Can Play

12 Golf Course Architects Reveal the Holes They Wish They Designed

7 of the Strangest Bunkers in Golf

I don’t gamble. I don’t think it’s wrong, it just doesn’t get my heart thumping or my juices flowing. If I happen to be in Las Vegas, I might drop $10 in a video poker machine—that takes about three minutes—then I’m done. No surprise, I don’t go to Vegas often.

But Atlantic City? That’s another story. Yes, I know all about its troubles: shuttered casinos, Hurricane Sandy, high unemployment. However, reports of its demise have been greatly exaggerated. Eight casinos remain open—including big names like Bally’s, Caesars, Borgata, and Tropicana—and the $2.4 billion Revel that went from debut to dark in just 2½ years may re-open this year. 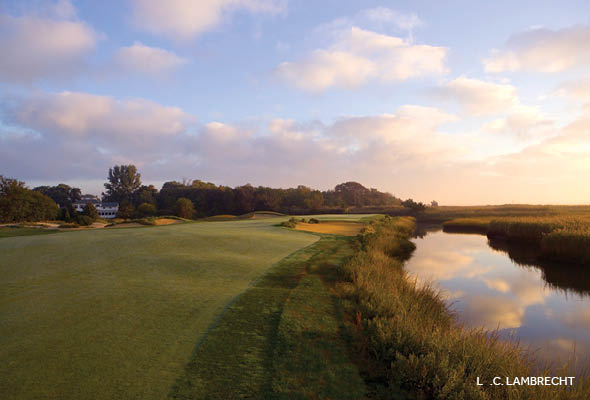 Plus, there’s another Atlantic City. One featuring attractions like the famous boardwalk (think “Monopoly”), mom-and-pop restaurants, fishing from jetties and ocean-going boats, and the sort of silly fun found in beach towns everywhere: homemade ice cream, amusement parks, the Steel Pier. In summer, Atlantic City—which actually sits at the northern end of an eight-mile-long island—is a popular family-vacation spot.

Best of all, it’s a really good golf town. Within 45 minutes are 17 remarkably diverse public-access courses. Spend a few days and you’ll be amazed at the variety, from topography to playing experience. I did, and I was. 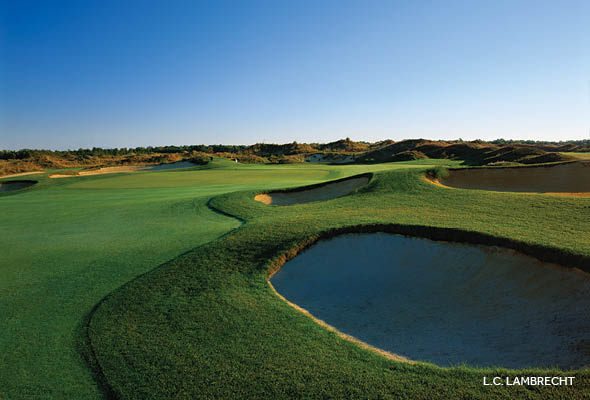 AC bends over backwards to welcome golfers by offering discounted deals that package rooms—not only in casinos but also smaller hotels, condos, even homes along the seashore—with rounds, and, if you want, restaurants. As Mike Charlton, whose GolfAC.com is one of the area’s leading golf packagers, told me, “In the last few years, the casinos have been very welcoming of the traveling golfer and have been very aggressive in their pricing.” And let’s admit it, staying at Caesars or Harrah’s gives guys on a buddy trip something to do at night besides clean their grips.

Stay wherever you like: there’s a range of options and prices to match. As for where to play, allow me to deal out a few suggestions.

Don’t miss Atlantic City Country Club, in Northfield, which was founded in 1897, was where the term “birdie” originated, has hosted six USGA championships, and received a Tom Doak renovation in 2000. It has all the trappings of a private club—the wood-rich locker room is filled with memorabilia—and a course to match. Working its way from trees to the water, the course closes with a thrilling stretch of holes along the bay and a great view of the casinoed skyline. And you never know who you’ll meet there: A giant snapping turtle was crossing the 13th green as I hit up, so I wisely waited… and waited… while he played through. (ACCC is the most expensive course in the area, so expect a surcharge if added to a package.) 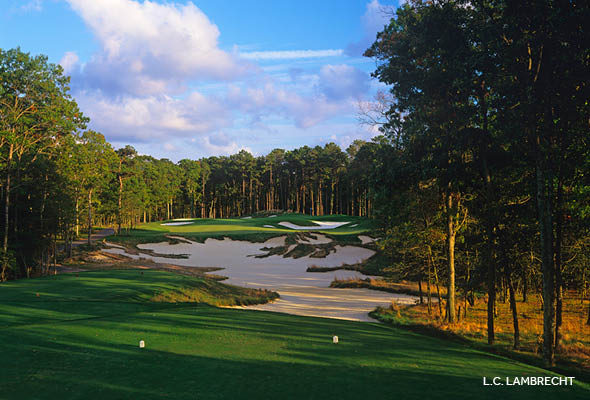 The accurately named Twisted Dune, in Egg Harbor Town-ship, is a roller-coaster romp through scrub and sand. More than two million cubic yards of earth were moved to create elevation, ravines, grassy hills, more than 100 bunkers, and big greens. It’s pleasantly scruffy—and slightly over the top.

I really fell for Shore Gate, in Ocean View, carved out of a forest and featuring lakes, dunes, and more ocean breeze than you’d think you could get through the pines. Ballamor, in Egg Harbor Township, is a local favorite, a once-private course that takes great pride in its conditioning and the sense of seclusion on every hole. Vineyard Golf at Renault Winery in Egg Harbor City abuts a working winery that also features award-winning restaurants and a hotel. 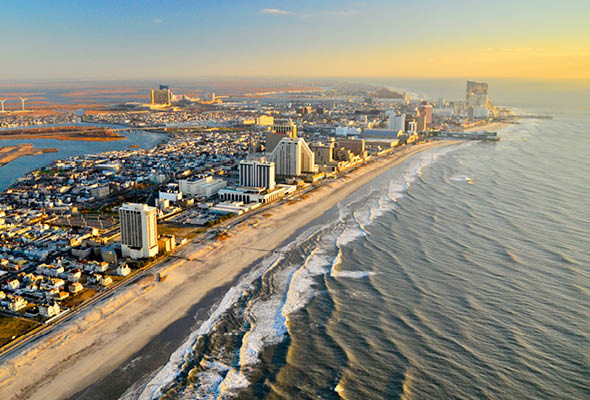 There are two courses at the Stockton Seaview Hotel & Golf Club in Galloway. The Pines, which dates back to 1929, is lined with trees and demands precision. The Donald Ross-designed Bay Course, routed along the water, is more open and undulating, with mounds and deep bunkers. It was the site of the 1942 PGA Championship, Sam Snead’s first major title, and currently hosts the ShopRite LPGA Classic in May. One of the closest courses to the city is McCullough’s Emerald Links, its holes patterned after classics from Scotland and Ireland; its Library III restaurant is a popular steakhouse where you tell the chef how many ounces you want and how you want it cooked. 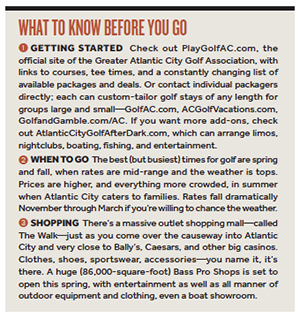 For more steak, several big names have outposts in the casinos, including The Palm (Tropicana) and Gallagher’s (Resorts). For less formal fare, try Atlantic City Bar and Grille, Back Bay Ale House, Angelo’s, and Irish Pub; Juliano’s Bar and Grill in Egg Harbor Township is a neighborhood place that visiting golfers love. Back by the boardwalk, leave your casino, stroll streets with familiar names like Atlantic, Baltic,

and New York Avenues, and you’re sure to encounter a host of dining options.

Four days/three nights in Atlantic City with a room and three rounds of good golf, with cart, starts around $350 per person during the week, $550 on the weekend. That’s a sizable savings over booking a la carte since rounds alone range from $65 to $120 depending on the season. Meals are extra, as is whatever you lose at the tables.

But the golf? It’s a sure thing.

The Most Underrated Pete Dye Courses You Should Play