I like factories. Seeing real things get made. Going through the assembly process from raw materials coming in at one end and a finished product emerging at the other.

I especially like touring factories that make things I like. So I’ve been in numerous golf ball and golf club assemblies, as well as printers, auto plants, even the back of a homemade chocolate shop.

Last month, while spending a few days at Casa de Campo, the wonderful golf resort on the southern coast of the Dominican Republic, I was able to see another favorite product from start to finish. I toured Tabacalera de Garcia, the largest cigar factory in the world. And whether or not you like cigars (I do), it is a fascinating visit.

The factory is less than 10 minutes from Casa de Campo’s front gate. A resort shuttle can take you over for the tour, which lasts about half an hour.

The sprawling complex, which employs 4,700 people, was established in 1971 shortly after Pepe Garcia left his native Cuba for the DR. Today, this one factory is responsible for more than 60 different brands including some of the world’s best known, such as Don Diego, H. Upmann, Romeo and Juliet, Onyx, and my personal favorite, Montechristo.

From one eight-hour shift, TdeG produces more than 100,000 handmade cigars a day. (It also makes thousands of lesser quality machine-made smokes.) That same factory also produces cigar boxes, in both wood and cardboard, even the labels.

Huge bales of tobacco leaves arrive from around the world—notably Central and South America, Africa, and Asia—then sorted by color and quality. Each tobacco plant (the growing kind, not the factory) produces an assortment of leaves, their color and taste determined by how much sunlight they receive, a function of their position on the stalk. Just as different grapes are combined to produce wine, different leaves are blended to produce cigars in a wide choice of tastes. 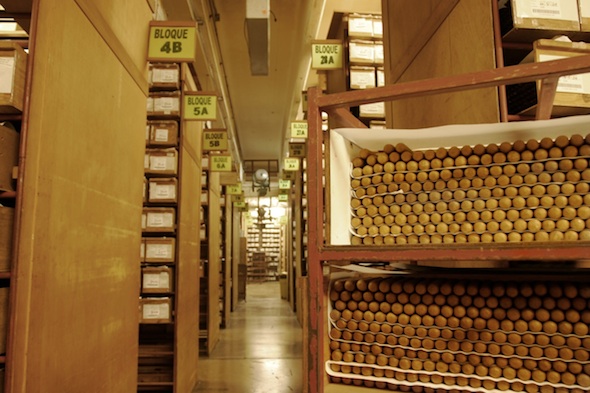 All the work is by hand, from sorting leaves to rolling them. Each cigar is comprised of at least three different tobaccos—the filler, which is held together in a binder, then surrounded by the wrapper. But a brand’s unique character is created through the combination of leaves: Montechristo White, for example, uses six tobaccos—four varieties blended in the filler, plus a binder and a wrapper.

At wooden tables that look hundreds of years old, the filler leaves are rolled together and wrapped in a binder. The “bunch,” as it’s then known, is set in a mold where it is kept under pressure until a highly skilled craftsman uses a special knife to cut a single leaf into the wrapper that is expertly rolled into place. Watching the final wrapping process is nearly hypnotic, long deft cuts of the curved blade followed by wrapping and stretching the enshrouding leaf just so.
There is constant movement—of fingers and hands; carts, trays, and boxes of materials; then finished goods. A giant storeroom holds up to 10 million cigars, which cure for a few weeks or months before packing and shipping.

About 95 percent of the factory’s output is for export, mostly to the U.S. According to my guide, Dominicans aren’t big cigar smokers. He also said that the average income in the country is $200, while skilled workers at TdeG can earn twice that. And all employees are served three free meals a day by the company.

The tour begins and ends in a small waiting room that doubles as a shop. The prices are good but not great: I pay less at home for the same cigars, but the ones in the factory didn’t have to travel as far.

If you don’t get to the factory, there are cigar stores at the Casa de Campo marina as well as at Altos de Chavon, the village high up on the cliffs overlooking the Chavon River. There also are cigars for sale at the golf clubs and restaurants. Because nothing finishes off a great golf day like a cigar whose provenance is next door.