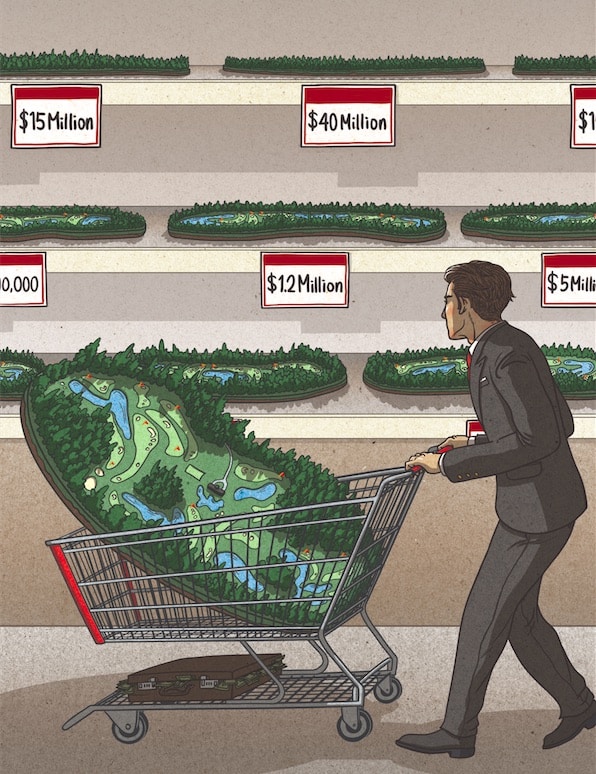 Every day for almost 20 years, Dan Doyle Jr. passed the same public golf course near Tampa, Fla., while driving his kids to school or heading to the office. The town-owned Belleview Biltmore Golf Club in Bellaire was the venue at which Doyle learned to play the game as a youngster and he’d frequently feel pangs of disappointment to see it slowly fall into disrepair.

So when the opportunity arose, Doyle bought it.

“I would say as a joke that I should buy that thing and bring it back to its old luster,” says Doyle, the president and CEO of DEX Imaging, a Tampa-based company that sells and services office equipment and data management solutions. “And then I did it.”

The $3.8 million Doyle paid for the course, in Florida’s third-biggest market, is slightly more than the average purchase price ($3.1 million) for the 114 golf course sales tracked by Leisure Investment Properties Group last year. And the majority of transactions in the current environment involve first-time buyers, like Doyle.

So, how exactly does one go about buying a golf course?

It’s a complicated question at a time when golf course values are lower, on average, than they have been in recent years, particularly prior to the Great Recession (2007–09). Many of the courses on the market right now can be purchased for a lower price than an opulent home.

Where does one look? Who do they talk to? What kind of research is needed and what constitutes a solid business plan? Whether you’re a PGA professional who always wanted to own a course or a savvy businessperson with a passion for the golf industry, here’s a quick blueprint.

The process usually starts in one of two ways: a prospective owner has a specific golf property in mind (having played there or heard about it from a friend), or the person knows they want to buy a course and starts by talking with a broker who specializes in golf course properties.

“There’s plenty of opportunity for people to make money in this business,” says Steven Ekovich, a co-founder of Marcus & Millichap’s National Golf & Resort Properties Group. “But you have to work with someone who understands the financials, the area, the competition, and what you have to change in the business platform to make money. Those who keep doing the same thing are going to keep getting the same result.”

Ekovich says his group gets inquiries almost every day about buying a golf course. But before showing a potential buyer any assets, they’ll find out why that person wants to own a course, what type they want to buy, what criteria they’re looking to buy under, how much money they want to put into the property, and what their financial standing is. This information is particularly valuable because in addition to golf facilities that are “on the market,” there are properties that aren’t listed, but still available.

For buyers, there’s understandably greater interest in golf courses in areas with a 12-month playing season. More sophisticated shoppers also tend to gravitate toward private golf courses because there’s typically a more dependable source of income as opposed to the vagaries of daily- fee play.

“And everybody wants the well-located asset that’s been mismanaged where they can come in and create value,” says Ekovich.

The areas that are the most desired by buyers—and generally priced as such—are along the coasts, with states like California, Florida, and Hawaii the most popular, followed by the Carolinas and Maryland.

Once a potential property is identified, this starts the buyer down the road of due diligence, for both the facility itself and the market.

Among these considerations: Is the course in good working order? Are there mission-critical
systems like irrigation, drainage, and clubhouse heating and air conditioning that need to be replaced or repaired? What are the environmental concerns? What condition is the maintenance equipment in? How old is the property and what is the expected lifespan of its systems?

As for the high-level view of the market itself, are there golfers nearby? Will it be positioned as a public or private facility? Is there growth potential or the opportunity to sell memberships? What can the course charge for green fees? What does the competition in the area look like?

A number of organizations can help interested buyers find answers to these questions. The National Golf Foundation’s GolfMAP system, for example, provides a detailed look at demand-related variables such as participation rates, golfing households, rounds played, interest among non-golfers, and household income in a particular region. NGF consultants can also provide in-depth studies that are ultimately intended to find if a course has the potential a buyer thinks it does.

“The buyers that do their due diligence up front, before they make the purchase, are the ones that tend to be successful afterward,” says Richard Singer, the NGF’s Senior Director of Consulting Services. “You can’t make these decisions based on emotion; you have to do it on proper data, facts, and inspection of property—like any other asset you might buy.”

In 1988, Cathy Harbin attended a seminar about how to buy a golf course. Almost three decades later, the long-time industry veteran finally became a course owner.

Harbin, who oversaw the golf operations of 105 properties while a vice president at ClubCorp from 2012–16, last year bought a public course in Paris, Texas, called Pine Ridge. The course was an ideal fit for what she was looking for: a public-player-friendly course with a small clubhouse where she could focus on connecting with the local community and create grow-the-game programs.

Harbin has several words of wisdom for first-time buyers. For the owner who’s already closed a sale and is now making plans for their new course, her advice is not to get “in front” of the revenue.

“Don’t come in and make sweeping changes because you anticipate a change in the buying patterns of the public,” says Harbin, who also held executive roles with Golf 20/20, the World Golf Village, and American Golf. “People constantly ask me, ‘Are you going to do this? Are you going to do this?’ And my answer is always the same: if revenue warrants that and I have the ability to do it, I sure will.”

Prior to that, though, Harbin cautions not to get so caught up in the excitement of pursuing ownership that you make a bad decision.

During her eight-month search, Harbin found a property she really wanted, in an area in which she’d worked, but was outbid by several hundred thousand dollars. The owners said they would sell the property to her if she matched the offer, but Harbin passed after giving it some consideration, knowing the financial limits to which she’d already stretched.

“It was painful because I really wanted that property, but I knew that wasn’t the right price,” Harbin says. “And anyway, I said to myself, ‘That’s going to be for sale in a couple more years because they’re paying too much.’”

Do profitable opportunities exist? Yes, but the reality is that the golf course market is oversupplied, the byproduct of more than 4,000 courses being built from 1986–2005. It’s why course closures have outweighed new course construction for the past decade. While some closures are attributable to mismanagement, too few golfers, or too much competition, this trend has been largely driven by residential and commercial real estate, and the demand for land.

“Everybody wants a course they can convert in a major metropolitan area,” says Ekovich, “but you’d better not go into it thinking that’s what you’re going to get because there are so many restrictions,” he adds. “I’ll have people call me and say, ‘Hey Steve, I want to buy golf courses because I want to convert them.’ I say, ‘Okay, you’re like speculator number 7,000 with that in mind, so just know, there are only a few such courses out there.’”

Golf course real estate isn’t what it once was. At least not right now. Those in the industry will tell you that a golf course that was purchased for $5 million in 2006 would be worth about $2.5 million today.

From 2010 to 2014, there were a lot of distressed golf course assets put on the market by lenders, financial institutions, and bankruptcy companies. Today, there aren’t as many quality assets simply because owners that held on through the lean times are hoping it gets better. Many are reluctant to sell at this point. That said, there are still plenty of courses up for sale if you know where to look. Here’s a sampling of the current market:

Bulle Rock has been voted the top public course in Maryland and ranked among the top 100 public-play courses in the United States. The site of the LPGA Championship from 2005–09, Bulle Rock is a Pete Dye design that also features a 35-station grass driving range, two practice putting greens, and a short game practice area. The 23,000-square-foot clubhouse features multiple dining venues, including a restaurant with indoor and outdoor seating, and banquet space with capacity for up to 240 guests.

PGA National Resort & Spa and its five golf courses previously changed hands in 2006 for $170 million and the property is now up for sale again. Beyond the golf courses, one of which hosts the PGA Tour’s Honda Classic, the luxury resort features 339 hotel rooms, a 40,000-square-foot spa, 42,000 square feet of meeting space, restaurants, and has invested $89 million in renovations since the 2006 sale.

Hidden Lakes is an 18-hole, par-69 course that winds through pine and oak trees along the Turnbull estuary and around lakes and meandering creeks. The club also features a grass driving range and a short game practice area with chipping and putting greens. The 10,700-square-foot clubhouse has a snack bar, 150-seat banquet room, and fully stocked pro shop.

The Gold Canyon Golf Resort & Spa is in the foothills of the Superstition Mountains in Arizona and features two 18-hole courses—Dinosaur Mountain and Sidewinder—that combine for 64,000 rounds-played annually. The sale includes the salon and spa, three restaurants, 97 casitas and villas, meeting and banquet rooms, and 76 acres of development land along fairways. The entire offering covers approximately 370 acres.

The 18-hole course at Brick Landing Plantation, known as “The Brick,” starts and ends along the Intracoastal Waterway and winds through coastal marshes. Located about 30 minutes from Myrtle Beach attractions, this semi-private course offers the benefits of a private club while still being open to the public. The clubhouse, which is less than two miles from the beach, features a locally renowned restaurant called “The View.”

Eagle Marsh is a Tommy Fazio-designed public course spread across 256 acres in an affluent, gated community in the heart of the Treasure Coast. The closest golf course to Hutchinson Island and its beaches, it is a premier South Florida golf destination. The sale also includes a 7,300-square-foot clubhouse with pro shop, restaurant, and banquet facilities.

Roxboro is a 160-acre property that doesn’t require continued golf use as a contingecy of the purchase. The price includes the only golf course in North Carolina’s Person County—a par-71, 5,665-yard layout—along with a clubhouse, pool, tennis courts, cart barn, maintenance barn, snack bar, event center, and pro shop.

Has a golf course sold recently in your hometown? Tell us in the comments below!

The Perfect First-Time Trip to Ireland

Playing Shinnecock Before the U.S. Open