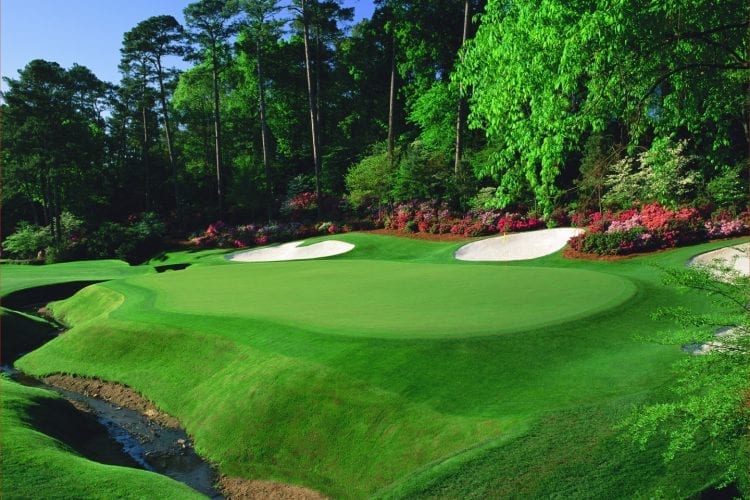 Seven thousand, four hundred and forty-five—Not too long ago, that number was as distant as the Sun and as far-fetched as 460cc drivers and a player more than halfway to Jack Nicklaus’ record of 18 majors before his 30th birthday. But now, as 30-year-old Tiger Woods goes after his 11th major wielding a driver as big as his head, Augusta National Golf Club’s 7,445-yard layout doesn’t even seem that long.

Still, it’s big news every time Augusta National changes its layout, and most of the build-up prior to the 70th Masters, which begins April 6, will focus on the lengthening of six holes—1, 4, 7, 11, 15 and 17—for a total of 155 additional yards. Among the talking points will be whether the added length will help or hurt Woods’ chances of winning his fifth Masters, whether the change is good for the game and the possibility of a rolled-back, uniform “Masters ball.”

But forget those questions. There’s another one that’s more intriguing. Whether attending the event or watching on television, who among us hasn’t wondered: “What would I shoot?”

The answer, or at least the question, provides a window into an ongoing trend: the disparity in the pros’ and amateurs’ games. The average driving distance on the PGA Tour went from 260 yards in 1993 to 290 yards last year. At the top, John Daly averaged 289 yards per drive in 1993, nearly nine yards longer than second-place Davis Love III. Last year, Daly averaged 310 yards per drive, good for fifth place; Scott Hend’s average of 318.9 yards led the tour.

The pros’ increase has resulted in a change in the way they play the game, even at majors, normally the most difficult playing conditions tour players encounter all year. Rather than worry about precision, long the quality major winners used to negotiate these demanding setups, the bombers hit their drivers as far as they can.

At last year’s U.S. Open, Woods’ coach, Hank Haney, told Golf World, “The game has changed because everybody plays the power game. They’ve realized it’s better to be in the rough 100 yards from the hole than it is to be in the fairway with a 5- or 6-iron in their hands.”

In 2005, two of the biggest proponents of this strategy, Woods and Phil Mickelson, won three majors between them. Defending U.S. Open champ Michael Campbell isn’t exactly a bunter either: His average driving distance at Pinehurst was 294.3 yards.

“It’s just a smash, just a slog,” says Campbell. “There’s no finesse in the game. I played with Tiger in the first two rounds at the PGA, and he’s hitting it so far it’s frightening. He’s 40, 50 yards past me.” In short, winning golf is more John Daly, less Ben Hogan.

In response, the game’s officials have fortified classic courses in advance of nearly every recent major championship, moving tees back and narrowing fairways. As layouts get longer, power becomes more important as well, prompting more lengthening—and creating a vicious circle. No venue provides a better example than Augusta National during the Masters, golf’s most-watched event. It’s held on the same course year after year, so any changes are instantly apparent and much discussed.

But where does this arms race leave the average player, whose game—equipped with the same technology as the pros—has changed very little over the years? As architects keep moving the back tees farther back, they haven’t done the same for the other sets of markers—at Augusta, the gap between the member and Masters tees is 1,215 yards.

For decades, one of the biggest allures of golf has been that it was a similar sport for all, regardless of skill level. Now, as the pros fly iron shots past average players’ best drivers and play 7,000-yard courses as if they were pitch and putts, that premise doesn’t seem quite so certain. “The average golfer can’t do to the golf ball what the pros can do,” says Jack Nicklaus. “It’s just not the same game.”

To determine just to what extent the game is diverging for the pros and amateurs, we asked players, architects and teachers how they thought the average amateur would play Augusta National and what he would shoot from the back tees in tournament conditions.

Their analysis shows there truly is a chasm between the pros and amateurs. The consensus is that the average player would shoot about 120, nearly 30 strokes higher than normal—not unexpected. The real surprise is that those extra strokes have less to do with Augusta’s added length than with the challenges instituted from the start by course designers Bobby Jones and Dr. Alister Mackenzie. In short, despite all the alterations, the core of what makes good golf hasn’t changed all that much since Augusta National opened in 1932.

The Long and Short of Augusta
According to the USGA, the average handicap index is 15.2. A player with that index can expect to shoot 90 at most layouts. At Augusta, now designed to test the best players in the world, the strokes will start to pile up quickly on top of that baseline.

But length isn’t the only factor. Plenty of courses are more intimidating from tee to green, and most have holes the average player can’t reach from the back tee. “The holes [at Augusta] are plenty wide, the rough isn’t deep, there are no big carries to make off the tees, and you can give most of the severe hazards a wide berth,” says architect Tom Doak.

The potential for penalty strokes is concentrated on the four shots over water, all on the back nine—the par 3s, the 155-yard 12th (below) and the 170-yard 16th; and the par 5s, the 510-yard 13th and the 530-yard 15th. Distance is not a factor on those shots, since most will be played with mid or short irons.

But they can be tricky, especially the tee shot on 12, where Tom Weiskopf put five shots into the water and made 13 in 1980. “How the amateur plays 12 is going to be the key to the round,” says Rich Beem. “If he keeps dumping balls into Rae’s Creek, we’ve got a problem: He may not finish.”

Which means the average player needs to start quickly on the front nine, where there is little danger of accruing penalty strokes, and let his confidence carry him toward the turn and into Amen Corner, where plenty of trouble awaits.

But a good start isn’t a given, both for physical and psychological reasons. Greg Norman believes the terrain will give players trouble. “I think the golf course is a lot harder than people realize, in large part because of elevation changes and uneven lies,” he says. “The only true level lies you get are on the tees. You can’t really appreciate these nuances on television, and they make club selection very difficult. And it’s a whole different ballgame now that they’ve added so much length.”

If you start poorly, watch out. “As soon as they realize just how hard it is, they’d fall apart,” says noted instructor T.J. Tomasi. “That sort of thing gets in the head of an average player. I call it cumulative disreward. You play a few holes and it hits you: ‘I can’t play this golf course.’ I’ve seen guys play a course too difficult for them and more often than not they collapse. A 16 becomes a 26.”

The Real Trouble
Jones and Mackenzie designed Augusta National to be playable from tee to green, especially for average golfers, with the test becoming more difficult approaching the greens. While the additional length has made the course more demanding from tee to green, negotiating the greens at today’s speeds is more of a challenge as well.

That includes trying to putt and chip to them, especially off the tightly mown turf that surrounds most greens. There is little margin for error, so if a player’s execution is less than perfect, he will hit plenty of fat or thin shots, either skulling a lot of short shots through greens or having them come back to his feet. The smart play will be to putt whenever possible.

Which may not necessarily yield better results. Jones designed the greens with plenty of undulation to reward smart, well-executed approach shots. Even in his day, when the greens were slower and seeded with coarser Bermuda grass, they were difficult to negotiate. Today, the bentgrass putting surfaces are among the scariest in golf—during the Masters, there is reason to believe they measure well above 13 on the Stimpmeter. (Greens at most courses measure 8 or 9.)

At Augusta, reaching the green will be relatively simple compared with the task of getting the ball in the hole. This is where the strokes will add up and demonstrate the biggest difference between the way pros and amateurs play the game today. “People would be amazed at the number of putts they would take,” says architect Jim Hardy, also a noted swing teacher and former tour player. “The average 16 playing to tournament hole locations, with Sunday green speeds, could easily take 55 putts at Augusta.”

Contrast that with the Masters putting stats. Last year, Woods took just 115 putts, fewer than 29 per round. Chris DiMarco, who lost the playoff against Woods, averaged 27.5 putts, less than what some experts estimate an amateur would take for nine holes.

Despite their overall prowess, even the best putters in the world have looked foolish at times on the greens, so how the average player would fare would hinge on how well (or poorly) he can putt. “If he’s a good putter, I believe he might break 100,” says Doak. “If you can’t putt on fast greens, well, remember how Tiger putted into the water on 13 last year? A poor putter could do that on four different holes!”

Final Words
Billy Casper may be 74 now, but in his prime, he was one of the best players in the world and arguably the best putter. Last year, the 1970 Masters champion made unwanted news by shooting 105 in the first round. “And he can still play,” Tomasi points out. “He’s a lot better than a 16.”

Still, Casper’s game, along with those of fellow past champions, provides the best perspective about how an amateur would play Augusta National. “I don’t have the length you need to play that course,” he says. “Even a good player would have trouble. A 16 would shoot 95 normally, and it could be 15 to 20 shots higher, another putt on every green. Easily. Could be as much as 25 to 30 shots higher if he played poorly.”

Put it all together and a score of 120 is the over/under, with our experts on both sides of the number. “I think it would come down to needing to two-putt from 35 feet above the hole on 18,” says Norman. “And with that tricky left pin, I don’t think it’s likely—he’ll knock the first one six feet past the hole, miss the putt coming back, tap in and begrudgingly sign for a 121. But he’ll still be happy.”

“Because he played Augusta.”