There are countless ways to do a weekend in Las Vegas. At the poker table, slot machines, nightclubs, big-name shows, whatever you like. Let me offer one more: golf.

Coming from the East Coast, I found golf in Nevada a completely new experience. The stark contrast between emerald green grass and rocky brown desert is incredible, as is the over-the-top theater of courses built in such dramatically harsh surroundings. So whether you’re on a buddies trip, bachelor weekend, or couples getaway, break away from the tables to soak in some fresh air and desert golf. You won’t regret it.

I recently did my own Vegas weekend, staying at Caesars Palace and playing two courses with ties to the famous casino, Cascata and Rio Secco. Although no longer owned by Caesars, the two make a perfect golf weekend no matter where you’re staying. 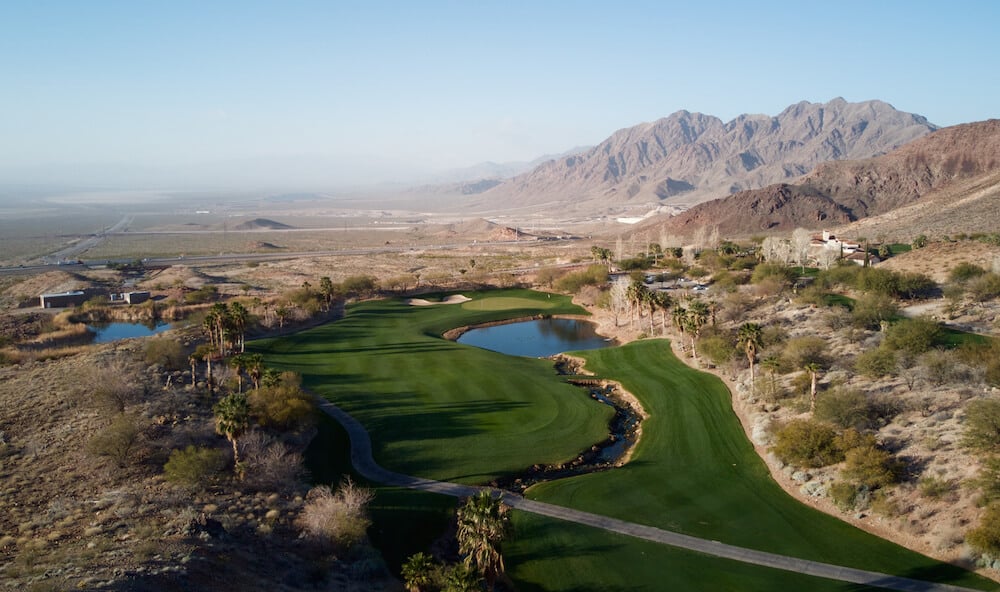 Designed by Rees Jones and opened in 2000, Cascata was Caesars Entertainment’s answer to Steve Wynn’s Shadow Creek. No expense was spared building holes up and down the mountain and in that way—over-the-top spending—it’s the perfect Vegas course. To ramp up the drama, the club even pumps water to the top of the mountains to fill the ancient creek beds found on the property. The most prominent stream runs from the hills behind the range, past the first hole, and through the atrium of the clubhouse. As with the rest of Las Vegas, be prepared to suspend reality.

Playing through the mountains 30 minutes outside of Vegas, the course features long views of the canyon floor in the distance. The par-three 12th is one of the most memorable holes, its green site blasted out of rock and surrounded by bunkers and a stream. The double-dogleg par-five 18th caps the round with a river, small lake, and well-guarded green waiting to trip up golfers as they leave. There are no homes in sight during the round and carts are a must, not only for the uphill stretches but also the long green-to-tee treks between holes.

Cascata makes for a great day—one that costs $425 plus a forecaddie. The course is always in immaculate condition, and the service is top-notch, as you’d expect for the price. (The rental clubs are PXG, which says a lot.) Our forecaddie was both knowledgeable and very likeable, telling stories and keeping me on track throughout the round. Although rarely busy, Cascata hosts a steady stream of players, much of it high-end businessmen from The Strip. Book a tee time at Cascata and plan to spend the whole day there to soak it all in. 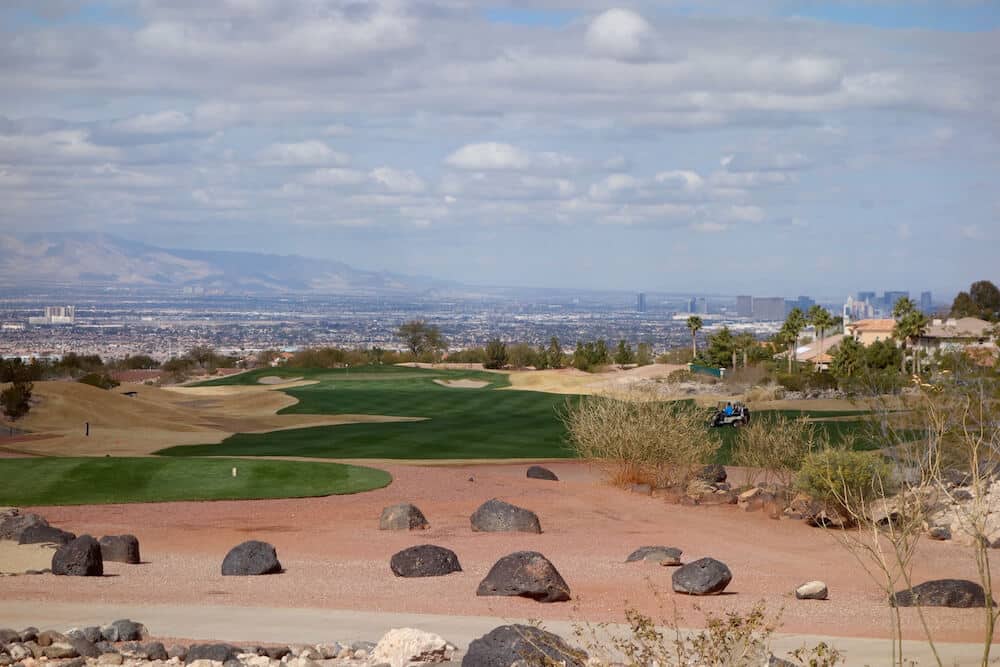 Another course from Rees Jones, but almost the polar opposite of Cascata, Rio Secco is built in the canyons below some of the largest homes in Vegas (including a 50,000-plus-square-foot mansion owned by the founder of eBay). But sheer cliffs border many of the holes, so you see the homes but they rarely come into play and the course feels tight.

In 2017, Jones led a $2 million renovation of Rio Secco with input from Butch Harmon, whose golf school is on property. They added forward tees, shrank and removed bunkers, and built 18 new greens as well as a new practice area. The result is much more playable for the average golfer.

Rio Secco is closer to the city than Cascata (and owned by the same company) and features some of the area’s best views, The Strip framed by mountains in the distance. In March—high season—a weekend round costs $279 and a weekday round is less than $200. The course was busy when I played it and the range was completely full with visiting golfers and locals. Rio Secco is worth a visit, but don’t expect the same service experience as Cascata. There aren’t caddies, there are homes on the course, and it’s not in PGA Tour-level condition, but it also won’t bust your budget, and that’s exactly what many people want.

One if the quintessential mega-casinos on the Vegas Strip, Caesars is sensory overload from the moment you walk in, a mixture of cheers, moans, and lights set inside a marble and gold faux-Roman city. There are more restaurants, shops, gambling corners, and shows than can be seen in a weekend, but don’t miss the Forum Shops with more than 600,000 square feet of high- and low-end retail. Even if you’re not in a spending mood, look up at the vaulted ceiling, blue with with fluffy clouds to match the sky on a sunny day. Ancient Rome at its most decadent wasn’t this flashy. As for the dining, which is just as fancy, my highlight was Gordon Ramsay’s Hell’s Kitchen, where diners sit near the open kitchen and feel part of the action.

Have you played golf in Las Vegas?

An In-Depth Update on The Links at Perry Cabin