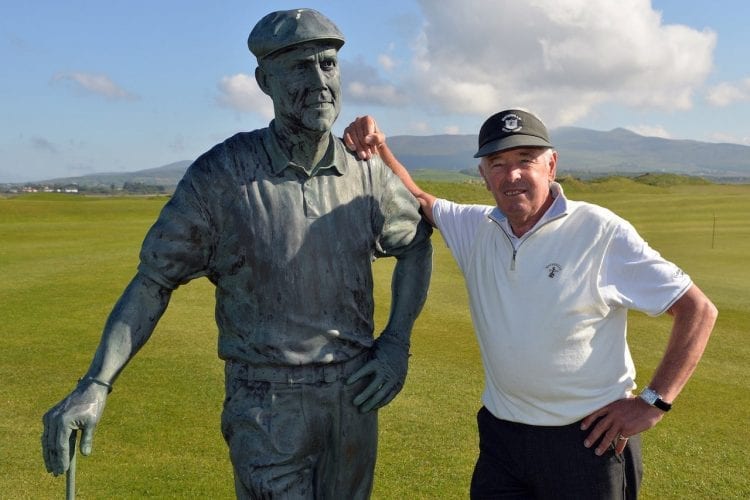 The next time you make it to Waterville in southwestern Ireland, keep an eye out for a spry figure, average height and build, with tufts of white hair peeking out from beneath a stocking cap. Most likely he’ll be flying solo around the links, bag on his back, bombing drives and carving irons beneath the wind like he’s played it thousands of times—which he has. That’s Liam Higgins, the first and only professional in Waterville’s history, a man whose outlandish feats call to mind not a fellow pro but a fictional character—Shivas Irons.
Liam Higgins was born in 1942 in the village of Little Island, on the outskirts of Cork. Then as now, the neighborhood is home to the Cork Golf Club, an Alister MacKenzie design where Higgins grew up caddying and playing under the watchful eye of his uncle, the club’s professional. In his early 20s, he looped for a lawyer representing John A. Mulcahy, an Irish immigrant who had risen to the top at Pfizer pharmaceuticals in New York. Higgins, an Irish International amateur with a burgeoning reputation as a long hitter, was invited to Killarney to play golf with the executive. After a few holes, Mulcahy had seen enough. “Let’s go down to Waterville,” Higgins recalls him saying. “There’s a property I’m looking at buying.”
“Liam was hired because he could hit the ball to East Jesus,” says Jay Connolly, a member of Waterville’s current ownership group. But Higgins quickly discovered that working for Mulcahy would be an adventure. The Ireland of his youth barely had electricity yet he found himself headed for New York to compete in a long-drive contest at Westchester Country Club. “I’d never been on an airplane before,” he says. Upon landing at JFK, he was greeted by two imposing African-American men. “I’d never seen a black person in my life, so I was a little nervous,” Higgins explains. But he got in the car. One of the men was the driver—the other was boxing legend Joe Louis. “He showed me all of his old photographs, and he was the nicest man I’d ever met.”
Higgins won the contest with a drive of nearly 400 yards: His opponent, after watching this display, memorably picked up his bucket of balls and walked off without hitting a shot. Mulcahy next sent him to Indian Wells, Calif., where he was greeted on the first tee by Bob Hope, Bing Crosby, and Ben Hogan. After the round, Higgins, who was about to turn pro, asked the Hawk for advice on making it on Tour. Hogan gave him a brand-new sand wedge from the trunk of his car and told him, “Don’t ever change this wedge out. Other than that, don’t change a thing.” The wedge remains in his bag to this day.
Higgins’s career continued to be defined by legendary power. In 1984, he uncorked a 634-yard blast on the tarmac at Dublin Airport, a Guinness world record that stood for a dozen years. And any visitor who stands on the tee of Waterville’s 16th hole, a 386-yard par four, doglegged and slightly uphill, is likely to be gobsmacked by its nickname—“Liam’s Ace.”
He could play tournament golf, too. In prime position for a spot on the 1977 GB&I Ryder Cup team, he got in a near-fatal car accident that kept him off the golf course for 18 months, but he made a full recovery and went on to win once on the European Tour and three events on the Senior Tour.
One thing becomes clear when talking golf with Liam Higgins—he’s obsessed with bringing golf courses to their knees. He credits this mindset to early-career rounds with Christy O’Connor Sr., the greatest Irish golfer of the 20th century and an escape artist surpassed only by Ballesteros himself. “Christy would say, ‘It doesn’t matter if it’s a sand wedge or a driver off the fairway, you’ve got to hit it the same distance from the flag,” Higgins recalls. “Those words were incredible to me. After that, I didn’t think of anything other than trying to knock the flag out of the green.”
Fifty years later, he’s still at it. “People laugh at me, bangin’ balls out in the rain. ‘You’re mad,’ they say. But I can’t do anything about it…I have to play.”

Pubs and Clubs of Dublin