Paul Fireman is a man with a rare sort of vision—the ability to see possibilities where others don’t. Back in 1979 he saw potential in a fledgling British shoe manufacturer. He became the U.S. distributor, eventually bought the company, and in 2006 he sold that company—Reebok—for $3.8 billion.

At about that time, Fireman turned his eye toward a totally different enterprise, the creation of Liberty National Golf Club. A lifelong golfer who’d begun as a caddie in Massachusetts, Fireman had dabbled in golf course development, but never had he seen a property quite like the Liberty National property.

The land stretched along nearly a mile of northern New Jersey coastline with jaw-dropping views of the Manhattan skyline. Just to the south soared the Verrazano-Narrows Bridge and, incredibly, less than 1,000 yards away stood the very symbol of America, the Statue of Liberty.

That was the good part. Not so good was that this land— once a bustling center of shipping, manufacturing, and petroleum production—had been derelict for decades. When Fireman first laid eyes on the property it was a wasteland of dilapidated warehouses, decaying piers, and abandoned cars, the rare green patches choked with weeds and debris. Worst of all, the soil beneath was contaminated with hazardous waste.

But Fireman knew the key to this property was not the site but the sights, not the land but the landmarks. So he set about creating a golf course and club that would be equal to the views he beheld.

It would take years of land purchasing, government approvals, and clean up. No construction could be started until the entire property was capped with a thick protective umbrella layer. Three million cubic yards of soil and silicate were spread across the site and that was topped with a mind-boggling 70,000 truckloads of sand, lifting everything 50 feet above the original land. 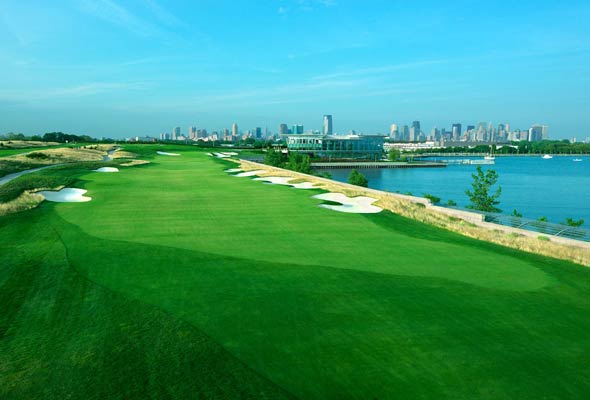 Architects Bob Cupp and Tom Kite were given the two things every course designer craves—a free hand and an unrestrained budget.

“If we wanted a hole to rise or fall or a fairway to fall left or right, we brought in the dirt and built it high above the cap,” says Kite. “We created lakes and brought in the water to fill them. Every bunker was constructed from scratch, built up and then dug down.”

Five thousand mature trees were imported and planted along fairways and greens whose conditions rival those of Augusta National. Cart paths were paved with Belgian block. The price tag: $150 million.

“It wasn’t the wisest business move I’ve ever made,” Fireman concedes, “but what I have now is something that will survive and transcend me for generations to come.”

Barely had Liberty opened when the PGA Tour chose it to host the 2009 Barclays Championship, first stop in the season-ending FedExCup Playoffs. One of the strongest reviews that week came from Padraig Harrington, who finished tied for second and said, “This is a phenomenal golf course. It’s good enough for a major, a superb test that puts us right on the limit.”

It was no surprise when Tour Commissioner Tim Finchem announced The Barclays would return in 2013. “Liberty National is one of the most stunning settings for professional golf there is on the planet,” said Finchem, “and we want to take full advantage of that.”

Although Liberty National is contained in a cozy 160 acres, its fairways are expansive with a rolling, links-like feel that ensures maximum visibility of the iconic surrounds. Fifteen holes offer views of the water and landmarks, perhaps a mixed blessing for golfers as keeping one’s head down becomes an act of supreme will.

Cupp and Kite crafted a succession of holes that are as visually pleasing as they are daunting. The opener is a good example, a gentle dogleg right with a creek that runs along its right flank before veering diagonally to menace the left side of the raised, tightly bunkered green.

The views begin with a bang at No. 2, a mid-length par three played toward the harbor with Lady Liberty so close she almost seems to be tending the pin. Many of the tees are elevated to allow full appreciation of both the scenery and strategy. At No. 5, the first of several brawny par fours, a pond looms to the left of the drive zone, but that is also the preferred side of the fairway as the right half is canted and contoured, leaving uneven lies for the approach to a sloping green guarded by bunkers and water. 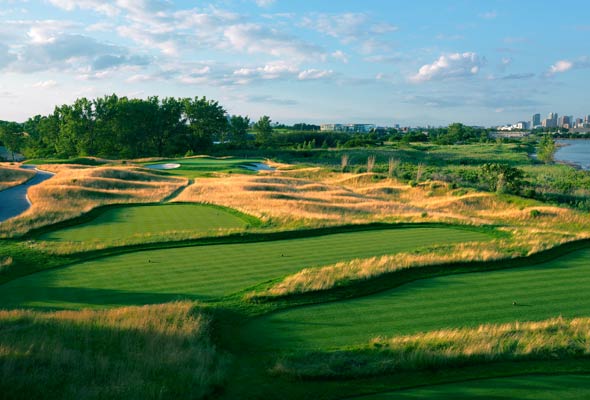 “I grew up at an old-style New England course where you had to work the ball,” he says, “and we’ve tried to instill that here. You can’t just bomb it all over the lot. You have to pay attention.”

For the pros, Liberty’s equivalent of Amen Corner comes at holes 9, 10, and 11, two bruiser par fours (10 plays as a par five for members) and a pond-flanked par three that plays 250 yards from the back tees.

“One of the Tour officials told me those three holes were statistically the toughest stretch they played,” says Fireman. ‘Yeah, I guess it’s the hardest part of the course,’ I said. ‘No,’ he said, ‘I mean the toughest three-hole stretch on the entire PGA Tour in 2009.’”

Number 14 is only 150 yards but it, too, is packed with peril, playing against the prevailing breeze to a tiny target surrounded by sand and marsh. And just to the right is perhaps the best harbor view of all.

A rare birdie opportunity arrives at the 16th, a drivable par four. But with a pond to the right of the green the tee shot had better be both far and sure.

At the home hole, a behemoth sweeping upward beside the shore, nothing but two strong shots will do. Finish with a par four and you’ll feel as if you’ve conquered the Big Apple.

Just behind the green stands what Fireman calls “a clubhouse like no one has ever seen,” 57,000 square feet of glass and steel inspired by the Sydney Opera House and constructed at a cost of $60 million. Inside are all the amenities: pro shop and locker rooms, spa and fitness center, library, grillroom, bar and lounge, and a formal dining room, all with those peerless views. From the formal dining room, the evening panorama of the Manhattan skyline is breathtaking.

The grillroom menus hint at the unique character of this club: iPads with the day’s bill of fare set as the home page, they enable diners to check e-mail and stock portfolios while ordering Cobb salads. This is not a country club, it’s a golf club and a businessman’s sanctuary, with a large percentage of the members working in New York’s financial district just a couple of miles away.

“We have guys who come here first thing in the morning, play nine holes, and they’re at their desks by 10 a.m.,” says Fireman, who accommodates his clientele with a motor launch that whisks members and guests across the harbor to lower Manhattan in less than 15 minutes. For those more pressed for time there’s a helipad, making this the only club in the world routinely accessed by land, sea, and air. Member overnight accommodations are available in luxury waterside villas.

Truth is, Liberty National’s members can come from just about anywhere. Among those who have joined are Phil Mickelson, Cristie Kerr, Eli Manning, Mark Wahlberg, Justin Timberlake, Ray Romano, Rudy Giuliani, and Vera Wang, along with numerous captains of industry.

Barely five years old, this is a club that has made its mark. In the near future, Fireman sees a full membership of 300. And what Paul Fireman sees tends to come to fruition.

A Guide to Golf in Bermuda