The name mountain lake doesn’t immediately conjure up Florida with its generally flat landscape barely above sea level. But the Sunshine State has a relatively elevated central spine of rolling hills dotted with lakes and springs, and it is here that you’ll find Mountain Lake and its beguiling Seth Raynor golf course. Despite being around 100 years old, this unpretentious private club community has largely flown under the radar and a visit is as delightfully surprising as, well, finding a mountain in Florida.

The peak at issue is Iron Mountain, which at 295 feet is one of the highest points in peninsular Florida, located just north of the city of Lake Wales. Even more noticeable is what sits on top: Bok Tower, a 205-foot U.S. National Historic Landmark with 60 carillon bells built by Edward W. Bok, the Dutch-born editor of The Saturday Evening Post and Ladies’ Home Journal who liked to winter in Lake Wales.

It was another visionary who is responsible for creating the club, Baltimore businessman Frederick S. Ruth. In the early 1900s, he acquired 3,500 acres of land at the base of Iron Mountain to create an exclusive winter community accessible by train lines like Seaboard’s “Orange Blossom Special.” First he hired landscape architect Frederick Law Olmsted Jr., scion of the man behind Central Park and countless other urban greenways, to lay out the property and design the Colony House, which serves as Mountain Lake’s clubhouse and private inn. It’s also on the National Register of Historic Places, as is the entire neighborhood with its grand, Mediterranean Revival-style estates. Then in 1915 Ruth hired Raynor to design and build the course.

Before going on to design the likes of Fishers Island, Camargo, and Yeamans Hall, Raynor apprenticed under Charles Blair Macdonald, the father of American golf who designed the National Golf Links of America, among other classics. Macdonald believed that there were 25 “template” holes that should guide architects when constructing a course, most based on famous holes found on Scotland’s finest links. But Macdonald and Raynor adapted the holes to fit the land: They weren’t carbon copies from one course to another. 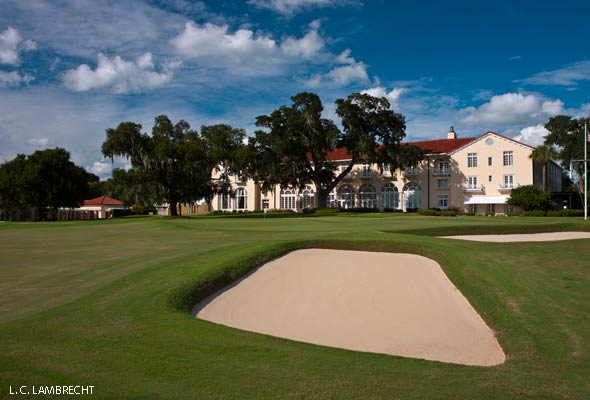 The first nine holes at Mountain Lake opened in 1916 and the second nine four years later, but don’t get the idea that this is some dated design that can’t pose a challenge to today’s golfers wielding modern equipment. It most certainly does, especially after a major restoration in 2002 by Raynor devotee Brian Silva, who returned the bite to a course that had become a little long in the tooth.

“The edge had been taken away from it,” said Vice-President and General Manger John L. Delcamp Jr. “A lot of the bunkers had softened. It was like a nice park course. It’s much more interesting and challenging now.”

Raynor’s trademark square greens and linear bunkers with their vertical grass faces give the course a very distinctive look. They’re evident out of the gate on the downhill 453-yard 2nd. Steep walls of grass defend the green on the right and behind, while another Raynor characteristic, a depression or “thumbprint,” divides the front of the green into two plateaus.

Golfers encounter two classic template holes early in the round: Alps at the 398-yard 3rd with its semi-blind second shot to a massive green and Biarritz at the par-three 5th. The latter can play anywhere from 180 to 230 yards from the back tees depending on the pin location on the giant green that stretches 55 yards from front to back. The last place a golfer wants to be is in the three-foot deep swale that bisects the green perpendicular to the line of play. “You’re better off being in front of the valley even if the pin is back because the slopes will counter one another,” said Superintendent Scott Scamehorn. “It’s not often you think about where you want to putt from before hitting a 230-yard shot.”

Strategic options like that abound. On the Road hole, the 351-yard 7th, the farther the drive finishes right near a yawning bunker, the better the angle into the narrow green. Similarly, a tee shot down the left side—toward Bok Tower—on the long, uphill, par-four 10th leaves a better look at the smallest green on the course. Another good tactic is to get some of “Marion’s” delicious chicken salad at the 11th-tee halfway house before tackling the hole’s Redan green: If the pin is to the right, players are better off in the deep, front-left coffin bunker than right of the severely sloping right-to-left green.

Optical challenges confront golfers on the next two holes, with a blind tee shot over a hill on the 461-yard 12th—the first of five consecutive par fours—and three bunkers that deceptively appear to line up from the tee on the 387-yard 13th when, in fact, the left one is actually on the other side of the landing zone. 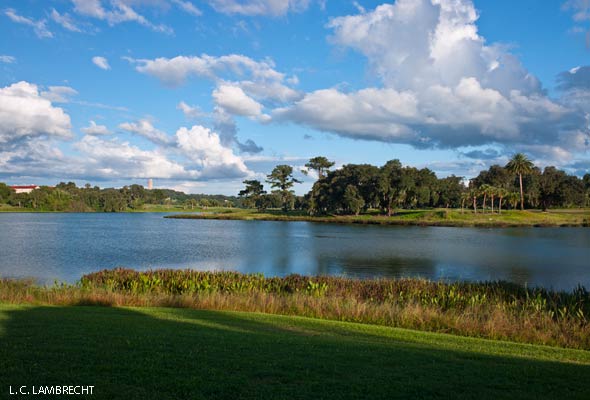 Silva’s deft restoration is particularly evident on the 432-yard, dogleg-left 16th. Working off an old aerial, he reinstated lost bunkers and mounding to bring back the hole’s thought-provoking playing angles. He also reestablished a bunker in the middle of the fairway about 60 yards short of the green that can wreak havoc with the long approach to a green that falls away from the player.

The uphill 18th is a very challenging finishing hole, requiring a drive over the namesake lake and a difficult second off an uneven lie to a tiered green that slopes hard from back to front. Fortunately, the elegant Colony House and its superior service, setting, and sustenance are just steps away. Menus change daily, but the European-trained chef Norman Frei, who has been at Mountain Lake for 13 years, is famous for his broiled pompano. Mountain Lake is also known for its complimentary homemade cookies, like almond macaroons that pair up well with the afternoon tea in the Sun Room. Last season, residents and guests gobbled up 42,000 of them.

The debt-free club has spent millions renovating the Colony House’s 36 rooms, bar, dining facilities, and common areas, while also building a new fitness center and pool house, which hosts Thursday night’s popular cookout. But one thing that hasn’t changed is the old–school culture. There is a strict no-cell-phone policy and jacket and tie are required in the main dining room. And unless it’s about what you did on the course, no one talks about his or her accomplishments.

While golf remains the club’s most popular sport with a full calendar of tournaments, there’s also an active tennis and croquet community. The five Har-Tru tennis courts have a state-of-the-art sub-surface irrigation system, while the two championship croquet courts offer fabulous views of the club’s namesake lake.

Other popular pursuits include speaker programs and a music series featuring a chamber ensemble from Juilliard every March. With soft classical strains filling the Colony House and the scent of orange blossoms in the air (500 acres of club-owned citrus groves surround the community), Mountain Lake is surely one of the most magical places to call home at that time of year, or any other.

A Redan You Can Play in Blue Jeans: Charleston Muni