For a small state used to being laughed at for its shortcomings, real and imagined, New Jersey is unusually rich in great golf courses. From Pine Valley to Plainfield, Baltusrol to Bayonne, the Garden State offers a bountiful crop of outstanding layouts, many of them with long pedigrees.

Another Jersey course is about to take its rightful place on the national stage. Mountain Ridge, located in West Caldwell, a few miles northwest of Newark (the state’s largest city and another frequent punch line), will host the USGA’s Senior Amateur at the end of September. For Mountain Ridge, which is celebrating its centennial this year, this will be its first significant tournament. It will not be the last.

The club was founded in 1912 by a group of German-Jewish businessmen. After looking at numerous locations and a who’s who of potential architects—including Herbert Strong, A.W. Tillinghast, Walter Travis, and Seth Raynor—they gave the job to Donald Ross. His finished design debuted in late 1929.

For more than 80 years, the course remained largely unchanged. Wide fairways and dramatically contoured greens—a Ross trademark—rolled over gentle hills dotted with pine trees that occasionally directed play one way or the other. Holes were generally straight, a meandering stream drifted in and out of range, and there were only a few dozen bunkers, most located near the fronts of greens. Mountain Ridge was classic Ross: Deceptively challenging, always enjoyable.

While few committeemen imposed their will on Ross’s creation, nature was not as reticent. Over time, the trees grew bigger and broader; more were added in the 1960s and ’70s, as was the fashion. Wide fairways became choked landing strips, approach shots had to be steered into greens, and golfers risked claustrophobia as they tunneled their way through the arbors unable to see another group or hole along the way. 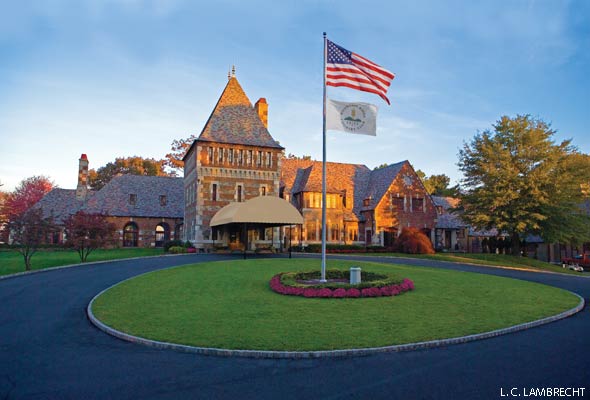 Once upon a time, Ross had written that there was “a limited place [for trees] in golf.” By the beginning of the 21st century, there was limited place to find his original among the oaks. About 10 years ago, an ambitious plan was adopted: Nearly 1,000 trees were removed, and, in 2009, the club brought in architect Ron Prichard, a specialist in Ross renovations.

The course today is much more the way Ross envisioned it. Without the trees, it is possible to see from hole to hole, across fairways, and—especially from the majestic clubhouse at the top of the property—to the hills beyond.

Expansiveness has returned, and with it new kinds of trouble. Fields of fescue edge many fairways. Bunkers that disappeared over the years are back, with others relocated to landing zones dictated by modern equipment. And with the constraining walls of trees removed, the subtle bends and elevation changes are both more visible and more effective.

Prichard expanded several greens and exaggerated their contours, which are even more daunting at today’s faster speeds. Many are surrounded by dastardly chipping areas.

The most controversial hole is No. 13, a long, flat par four that can be stretched to nearly 500 yards. Prichard significantly altered the landscape by redirecting a stream that didn’t come into play until the final 100 yards so it now runs like a spine through the middle of the fairway. (Long hitters also have to worry about finding the water that still runs perpendicular to play roughly 300 yards out.) Already the most talked-about hole in the renovation, it satisfies Prichard’s desire to “create conversation.”

Mountain Ridge finishes especially strong. At 550-plus yards, the par-five 17th is the longest hole on the course, with woods lining the left side, trees and bunkers on the right, and a ditch about 190 from the green; the last 150 yards rise to a heaving green that slopes from back to front. The final hole is as good as any in the state, climbing from the tee to the two-tiered green more than 430 yards away, the fairway bending around a stately oak on the right. Approach shots demand at least one club more to avoid a trio of bunkers constricting the entrance.

Having opened its course and, concurrently, opened its doors to the scrutiny of golf aficionados, Mountain Ridge is more than ready for its first appearance in the national spotlight.

The Conundrum of Centerline Bunkers