Diego Bustos is a senior sports anchor for CNN en Español. Originally from Argentina, Bustos took up the game in an unusual way—by starring in his own television show. From 2006 until earlier this year, he hosted CNN’s “Vive el Golf,” a documentary golf-travel series that followed his adventures from Tierra del Fuego to St. Andrews and beyond. The show is now hosted by Lorena Ochoa. Bustos, along with his continued work at CNN, recently launched a Spanish-language website called Golf360.com. As the number suggests, it offers a comprehensive look at the game, from travel to instruction to news from the Tours.

We caught up with the Atlanta-based Bustos to learn more about his extensive travels throughout Central and South America. Here are five of his favorite courses:

“La Reunion [above] is a Pete Dye design surrounded by volcanoes. They moved more than two million cubic meters of earth to build it. On No. 10, they built the hole along the edge of a huge canyon. You could easily spend six hours playing that golf course because you constantly want to stop and take pictures. Oh, and the volcano closest to the course is a live one—it erupts two or three times a day. When you’re having drinks in the evening after the round, you can look out and see lava coming down. Very nice place. And it’s ten minutes from Antigua [a Spanish colonial city and UNESCO World Heritage site that’s also famed for its coffee], so there’s lots to do in the area.”

“La Paz is the highest golf course in the world with grass. It’s something like 3,300 meters above sea level. Your drives are just eternal at that elevation. There’s a par-three there called “Ojo Lunar”—the Moon Hole [pictured below]. It’s called this because the whole topography…it’s like being on the moon. Don’t hit your ball in there—you won’t want to go after it. Another cool thing is that the indigenous women are the greenskeepers. They’re these big, round cholitas in native dress and bowler hats. And they play golf…with wooden clubs!” 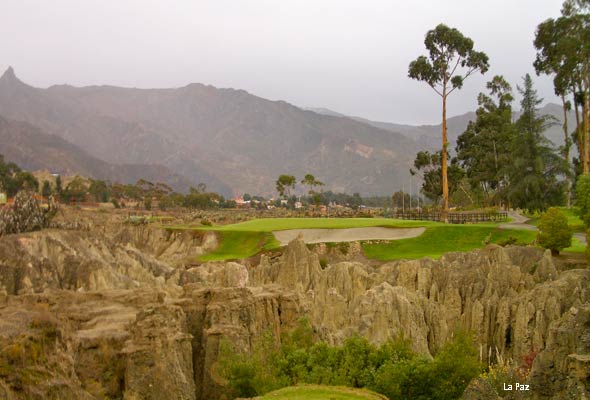 “I made some very good friends at Ushuaia, the most southerly golf course in the world. It’s nine holes in a valley, with a twisting river that crosses it and snow-capped mountains all around. The setting is just unbelievable. They made that golf course absolutely from scratch. I interviewed an older gentleman who was the first one who began picking up sticks and rocks to build the fairways. With the amount of snow they get, the contours of the fairway actually shift from year to year. Tierra del Fuego is literally the end of the world, so you can imagine—it’s almost always windy there. That adds to the challenge of the course.”

“Once upon a time, El Rincon [near Bogota] was considered one of the top 100 courses of the world. It’s a private club, but with an open mind toward visitors. It’s an older course—Robert Trent Jones, Sr. designed it in the ’60s—that has hosted many international events. I think Arnold Palmer even played there. [Ed. note: He did.] It’s sort of a combination of the tree-lined layouts you see in Argentina and what I call the American ‘tricky way’—when you see a perspective of the green, the best way to get there can be quite deceptive. Very challenging course.”

“Olivos is a must. As the home of the Argentine Masters, it’s got all the history, and the layout is just outstanding. It’s beautifully maintained with lots of old trees. Some holes appear easy at first, but that’s an illusion—the design is quite sophisticated. Even if you don’t know the history of the place, Olivos has an aura.”