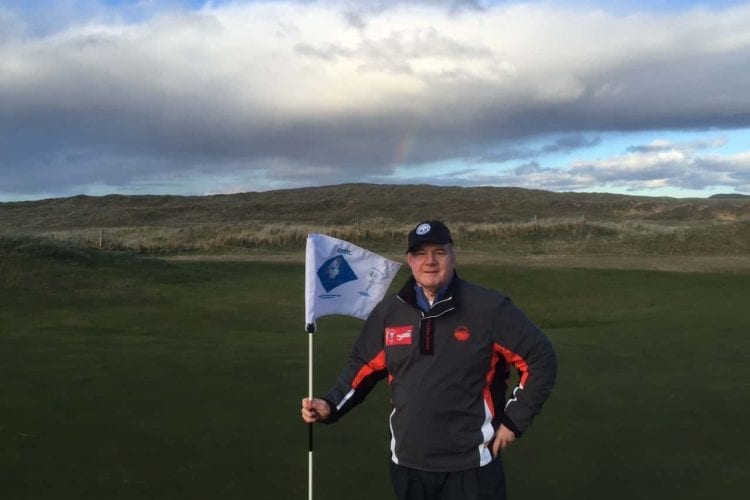 Nick Edmund should be resting. On March 4th of this year, carrying a set of golf clubs on his back, the 56-year-old Englishman set out along Ireland’s Wild Atlantic Way—a 1,500-mile tourism trail taking in the country’s western coast—before stopping on May 1st in Galway, the halfway point. During the first stage of his “golf-walk,” Edmund visited some 20 golf clubs, played their 4th hole (and no other), and left behind a special flag to fly on that hole. Then, instead of going home to London and spending the summer recharging his batteries in preparation for the second stage this fall, Edmund traveled to Southeast Asia and Scotland to plan similar ventures. (He also celebrated 30 years with wife Teresa.)
With a schedule like that, you might suspect Edmund is some sort of golf-trekking, flag-flying fanatic. Hardly. The purpose behind Edmund’s big walk and his 4-flag campaign is to raise money and awareness of local cancer initiatives.
Readers might be familiar with Nick Edmund. A contributor to LINKS for more than 20 years, he has been writing about golf since the late 1980s when he began editing a guide to British courses called Following the Fairways. He produced 14 editions of the book and has written numerous other golf yearbooks and compendiums.
In 1992, Edmund was working on a guide to Ireland’s courses called 40 Shades of Golfing Green, which would include 40 watercolors by artist Nick Jones. Another Nick—Faldo—won the Open Championship that year and word got out that he wanted a painting of Muirfield to mark the occasion. Jones put his name forward via Edmund, who began talks with Faldo’s then-manager, John Simpson.
They got talking about Irish golf and Simpson noted that while Faldo loved the Irish courses he had played, he actually hadn’t played as many as he would have liked. Edmund put an itinerary together and, before he knew it, was on a helicopter with Faldo, architect Steve Smyers (who was building Faldo’s course at Chart Hills in England), and various friends to Ballyliffin in Ireland’s far northwest.
A few years later, Edmund, a qualified barrister, was asked to look over some golf design contracts. And when Faldo was more or less done playing competitively and ready to branch out, he asked Edmund to help set up and manage his new design firm. They worked together for 15 years, creating more than 30 courses around the world.
But as he turned 50, Edmund wanted a change of pace. So after leaving Faldo Design, he signed up for a MacMillan Cancer Support trek to the Himalayas. “I’d always wanted to see Everest,” he says. “It was truly inspirational and uplifting.” He met the organization’s head fundraiser and they discussed possibly doing some kind of golf fundraising event.
In 2014, Nick Edmund was diagnosed with cancer of the head and neck (he is in remission), and his golf fundraising idea morphed into the Global Golf4 Cancer 4-Flag campaign and the Irish walk. “The number four is significant in many ways for both golf and cancer,” says Edmund, who has a website for donations —globalgolf4cancer.org. “One in four people in the UK are directly or indirectly affected by cancer, and in golf you have foursomes, four Majors, shouts of ‘fore,’ etc.”
Edmund will return to the Wild Atlantic Way in September to visit Ballybunion, Lahinch, Tralee, Waterville, and others, and meet many more locals along the route. “The generosity of the Irish people never ceases to amaze me,” he says. “I have been inundated with donations, pledges, and good wishes. I especially remember one very old man with Parkinson’s crossing the road in the pouring rain to hand me some money. But that’s just one story of many.”
Nick Edmund will finish at Old Head at the end of October, after which he might allow himself a few weeks’ rest. “It’s been hard at times,” he says. “I’d had hip-replacement surgery in December, so the first few weeks were very tough. But I’m loving it, too. Meeting so many wonderful people, walking for a great cause, and playing some great golf holes has made it all very special.”