Steve Smyers is giving a tour of his Mona Lisa, Old Memorial Golf Club, in northwest Tampa. Arriving at the green of the 314-yard 13th, he gets out of the cart to show how Greg Norman played this drivable par 4 during Sectional Qualifying for the 2002 U.S. Open.

In the morning round, Norman’s drive ended up in a five-foot-deep chipping area left of the green, which slopes severely from front to back. The front hole location meant the situation called for the most precisely judged of shots.

From a similar position, Norman’s playing partner hit a flop shot that ended up back at his feet, while the two-time British Open champion bumped a 4-iron. The ball had just enough momentum to barely crest the swale. From there the green’s slope took over, carrying the ball to within tap-in range.

Watching a genius playing his masterpiece just the way it was intended so affected the trim, friendly Smyers that he still talks about the shot in the proud manner of a parent whose child came home carrying a report card with straight As.

Norman very nimbly showed that in this age of power golf, Old Memorial demands all the shots in the bag. “It requires that other dimension,” says Smyers. “Where you want it to end up isn’t necessarily where you want to land it.”

Smyers received an even bigger compliment at the end of that day. Norman, who medaled with a score of 138, told Smyers that the design reminded him of some of his favorite Australian courses like Royal Melbourne and Kingston Heath. The similarity isn’t coincidental. Says Smyers: “I have such a love of the Sandbelt courses that they were truly an inspiration.”

The Down Under connection doesn’t end there. The walking-only club was founded in 1997 by two of the three Tampa residents—Chris Sullivan and Bob Basham—who started the Outback Steakhouse chain.

“We wanted a great golf course and great membership surrounded with some great hospitality in our hometown,” says Basham. “We wanted a course that was long but the ball would roll. It wasn’t your typical Florida course with a lot of carries over water and no roll. We wanted something a little bit different.”

The uniqueness starts with the location. Unlike a lot of Florida clubs that announce their presence along major thoroughfares with massive entryway complexes complete with waterfalls, Old Memorial has an entrance that couldn’t be more simple—or hidden.

Tucked away down a side road behind a high school and farm, Old Memorial’s gate greets members and guests with little more than a couple of stucco posts with keypads and bronze plaques.

“Once you go through that gate all your outside worries disappear,” says Connie Seay, an estate planner from Tulsa, Oklahoma. “You’re taken care of all the time and never sign any checks. Everybody’s just so happy and cheerful. It’s a magical little place.”

Part of the enchantment comes from the distinctive bunkering straight from the Alister MacKenzie school of design: massive areas of sand with sharp edges in front and backsides that fade into the natural landscape, giving a seamless transition between golf and the environment. Despite their beauty, many are intimidating. On the 433-yard opener, all you see from the tee are bunkers over the tops of cord grass. A sense of relaxing confidence takes over once you clear them and find your ball sitting in the ample fairway.

Because wind is often a factor, Smyers laid out the course so no consecutive holes face the same direction. Besides the big-picture brilliance of this routing, there are smaller touches that members appreciate, like the way the back edge of the green of the 668-yard 3rd mimics the distant shoreline of the lake behind it. 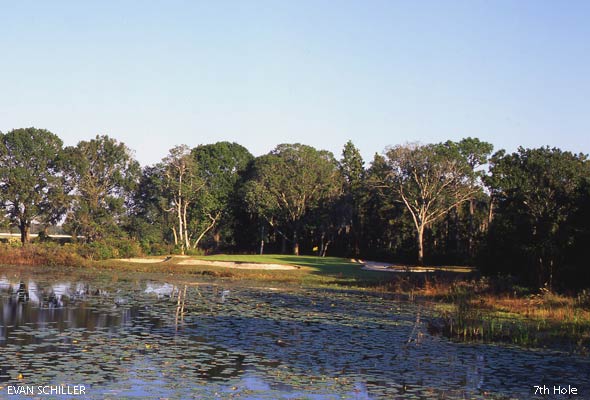 Each hole also has a subtle clue like a tree, bunker edge or grass line to hint at the best route. On the No. 1 handicap hole, the 459-yard 5th, which doglegs left around a lily pad-topped lake, the visual cue is a mound that will help kick the ball left to the water’s edge for a better angle to the green.

The 352-yard 8th features two greens. Just like the 8th at Pine Valley, the right green is more difficult. “There are a lot of big numbers there,” says Marc Carter, who was an assistant at Pine Valley before becoming Old Memorial’s first and only head pro. “My experience at Pine Valley was very similar to this, since both are national clubs. It’s all about the golf and trying to create that experience with the caddie program. That was the owners’ vision.”

Carter’s favorite hole is the par-3 11th (“shortest par 4 on the course”), which has a Redan-like green and deep bunker on the right that members have affectionately named after one of Smyers’ body parts—a la the infamous bunker at Pine Valley’s 10th.

But it’s hard to be mad about making a bogey there after passing by a bronze sculpture of two smiling, waving golfers between the 10th green and 11th tee. The statue is of two life-loving members, Tim Coughlin and Billy Minardi, who worked for Cantor Fitzgerald and were killed in 9/11.

Minardi was the brother-in-law of founding member and University of Louisville coach Rick Pitino, who wanted to honor them. “They never had a bad day,” says Carter. “That’s why they’re smiling. If you’re struggling, just high five [the statue of] Billy, and your luck may change. And a lot of time it does just thinking back on how those guys were.”

The split-fairway 642-yard 12th is reachable in two if you take the shorter but riskier route on the left. A waste bunker that runs the entire length of the hole separates the fairways, while the green falls sharply off to the right, making for a difficult up and down. “That sums up Old Memorial,” says Smyers. “The more direct line you take, the more trouble you encounter.”

If there’s one hole that really sticks in the members’ collective craw, it’s the 519-yard 16th. This is where the course abruptly shifts to a tight, wooded test. If the tee shot isn’t daunting enough, there are cross bunkers in the lay-up area and a tiny green that drops off steeply on all sides, especially in front.

As tough as the 16th hole is, the 451-yard 18th, which has a narrow, bunker-encircled green, has proven to be the most difficult during the annual University of Florida-University of Kentucky tournament, although it didn’t trip up former Gator Camilo Villegas, who made 10 birdies and no bogeys en route to a course-record 62.

It would be hard to top the golf experience at Old Memorial, but lunch inside the expansive men’s locker/grill room comes close. Given the founders’ background in the hospitality business, it shouldn’t come as a surprise that the food and accommodations are first-rate.

There are five cottages between the 1st and 2nd fairways, as well as four spacious rooms above the Old Florida-style clubhouse—a total of 62 beds. Members can have pretty much anything they want for dinner during their stay. All they have to do is put in a request with Executive Chef Fernando Rodriguez before their arrival.

Always available are the signature crab cakes, which are as good as any you could find in Maryland, where co-founder Basham went to school. “Being in the business, the food was very important to us,” he says. “Really good golf clubs—what are they known for? People usually talk about the food in the same breath as they talk about the course. They’re talking about the entire experience.”

The two founders couldn’t have come up with a better name for the club than Old Memorial: Anybody lucky enough to pay a visit winds up with memories that never fade.

Royal Porthcawl Golf Club, On and Off the Course