The residents of Spring Island like to say that it isn’t a community with a nature preserve, but rather a community in a nature preserve. Set amid a spectacular live oak maritime forest, the preserve is comprised of 1,200 of the island’s 3,000 acres, which in turn are surrounded by 3,500 acres of marsh fed by the Chechessee and Colleton tidal rivers (“ocean fingers”). The wetlands support more wildlife than Titleist has golf balls, including two pairs of nesting bald eagles.

Although nature is never far away, perhaps the best place to experience it is on the just-restored Arnold Palmer/Ed Seay-designed Old Tabby Links, where players share the course with more than 600 species of flora and a variety of fauna like wild turkeys, deer, quail, bobcats, and eagles. Perhaps more than any other course, Old Tabby is the late Seay’s epitaph because this was one course where he wasn’t left with the real-estate leftovers.

Just as Seay experienced more than 20 years ago, the first impression upon entering Spring Island remains one of awe, thanks to a forward-thinking development plan and environmental stewardship that resulted in limiting the size of the community to 410 families with homes remaining mainly out of site. There are very few paved roads and houses must have a 25-foot “nature curtain” of native vegetation around them.

Following the multi-million-dollar renovation, the 7,135-yard course is more eco-friendly and natural-looking, too, not to mention more enjoyable and strategic. The lead Palmer architect on the project, Brandon Johnson, rebuilt all of the greens and re-grassed them with MiniVerde, a bent-like bermuda that doesn’t need to be overseeded. He also repositioned some greens due to shade issues or for better shot values, added closely mown chipping areas, and turned perhaps the only weak hole on the course, the 405-yard 11th, into one of the more thought-provoking ones. Options abound now on the hole thanks to native grasses, waste areas, bunkers, mounding, and an angled green. Sandy scrub areas are also prevalent now on most of the other holes, too. The new, repositioned “Better Billy Bunkers” (a superior construction method named after former Augusta National superintendent Billy Fuller that significantly reduces washouts) complete the rugged, minimalist look. 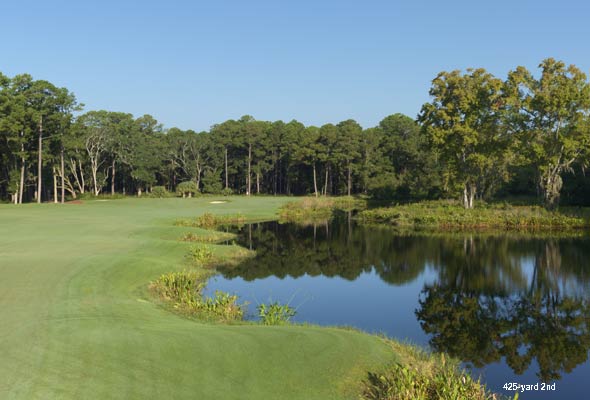 But perhaps the biggest improvement is what you can’t see: A new, state-of-the-art irrigation system that has drastically improved course conditions, while also saving millions of gallons of water a year. The number of sprinkler heads has more than doubled to almost 3,000, reducing the watering time from 8–10 hours to 3–4. Johnson also managed to shrink the total amount of irrigated turf, while simultaneously widening the fairways for more forgiving tee shots and alternate approach angles into the greens. And thanks to a sand cap, the course plays more firm and fast, too.

One thing that hasn’t changed is the terrific routing, through a live oak forest on the front and through former quail-hunting pastures on the first six holes of the back before a stunning conclusion along the marsh. Water comes into play on 16 of the holes, including on the superb collection of par threes and the 385-yard 15th with its island green.

The course gets its name from the ruins of a 200-year-old plantation house just to the right of the 9th hole, a straightaway par five with the green set right in front of the marsh. At the picturesque, intimidating 200-yard 17th hole, built on a narrow spit of land between a spring-fed pond and the Chechessee River, it can seem like all the island’s more than 300 species of birds and other wildlife are present—the singing herons, anhingas, and egrets form a gallery like few other courses. The rookery is the maternity ward for hundreds of birds each spring. Completing the Mutual of Omaha’s Wild Kingdom scene are many gators and yellow belly slider turtles that call it home, too.

Wetlands guard the straightaway, par-four 18th on the right, while on the left by the green is a wonderfully rustic clubhouse—few 19th holes are as charming and inviting. The food—shrimp and grits, she crab soup, and plates of homemade cookies—and views over the Biarritz-like green toward the marsh make for a fitting end to unique experience.

How to Ease Joint Problems