Until recently, the arid southernmost region of Mexico’s Baja California peninsula was the exclusive haven for sport fishermen plying the sparkling blue Sea of Cortez. But the azure landscape is now complemented by verdant swatches of fairways that decorate the sandy shores, drape the craggy mountain landscape and reel in lovers of a different game.

The men responsible for establishing golf’s roots in and around Los Cabos, Mexico, were developer Donald Koll and course designer Jack Nicklaus. In the early 1990s they worked together to open Palmilla Golf Club, the first Nicklaus design in Latin America.

Their efforts finally brought golf to a resort community that dates to 1956, when Abelardo Rodriguez opened a 15-room hotel that drew the likes of John Wayne, Clark Gable and President Dwight D. Eisenhower. Now under the One&Only umbrella, the 173-unit property is one of Mexico’s premier resorts, especially after an ambitious $90 million expansion in 2004. 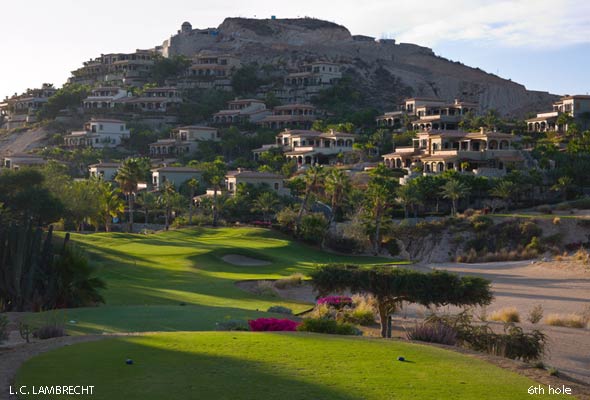 Located across the street from the hotel, the original 18 opened in 1993 and is comprised of the Arroyo and Mountain nines, which offer a taste of the indigenous terrain inherent in their names, while also providing nearly ubiquitous views of the Sea of Cortez.

Arroyo’s opening hole appropriately signals the scenic, sensory and strategic golf experience that ensues. The 360-yard hole plays from an elevated tee to a wide landing area. The hole turns left and the second shot must carry a sandy transition area to a well-bunkered green. Cordon cacti populate the landscape, and Nicklaus used the deep canyons to incorporate forced carries into the challenge. Holes 6 through 8 in particular are considered the soul of this nine, due to their harrowing shots over hazards.

The land moves more dramatically on the Mountain, the most intimidating—as well as the most diverse in design—nine. The 401-yard 5th hole draws the most gasps. The sweeping dogleg right requires two precise shots over barranca to a shallow green tucked into a hill. Requiring three carries over sandy transition areas, the zigzagging 550-yard 7th is pure target golf. 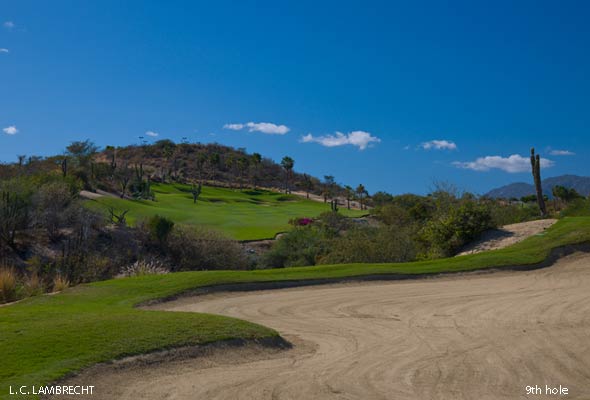 In 1999 Nicklaus added the 3,434-yard Ocean nine to complete the enthralling trilogy. Ironically the only nine without a water hazard in play, the Ocean skirts the shoreline and features 600 feet of elevation change on the first six holes. The 3rd, a downhill 458-yard dogleg right, tends to be a favorite. A tee shot over a waste area sets up a scenic second shot directly at the sea, to a green perched atop the beach.

While each of the nines possesses a unique character, there are some common features. Deep bunkers are prevalent around the greens, but Nicklaus kept the courses playable with aprons and entranceways fronting the gently moving putting surfaces. These features are friendly toward errant approaches, allowing players of all levels to enjoy a 27-hole day.

Nicklaus recently returned to oversee a renovation of the bunkers and green complexes—the putting surfaces are now MiniVerde, a sturdier strain that makes the greens more consistent. He also renovated the practice range and added a 4,500-square-foot putting green.

But don’t spend too much time working on your game. Because the golf—as well as the rest of a stay at One&Only Palmilla—is all about relaxing, forgetting life’s troubles and collecting lasting memories from a special destination.

The Club at PGA West: Nicklaus Tournament and Private Courses