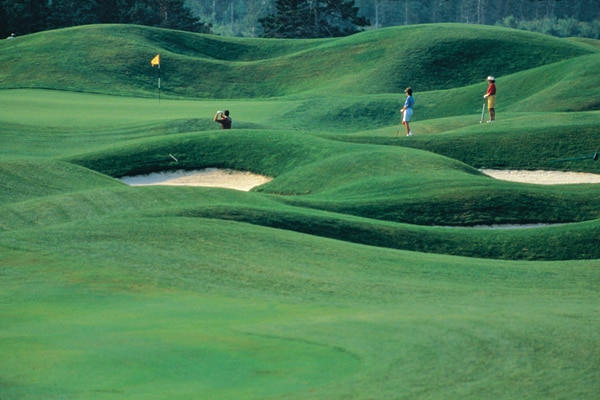 Prince Edward Island (PEI) is connected to the New Brunswick mainland by an eight-mile bridge. For about six months of every year, the maritime lifestyle and pastoral setting draw legions of visitors, many of whom have been coming here for generations to stay at the colorful inns and bed-and-breakfasts near the beaches—and to play the surprisingly large number of superb seaside courses.

The first of these was Green Gables, a 6,459-yard Stanley Thompson design built in 1939 and revamped in the ’80s. Bordered by mature hardwoods, the layout has some memorable holes on the back nine, where the Lake of Shining Waters comes into play. The signature 16th hole is a lovely 181-yard par 3 that crosses a corner of the lake.

The next morning, a 25-minute drive took us past bucolic farms with buildings painted in bold Caribbean hues, and equally colorful fishing villages mirrored in quiet harbors. All commercial signs are small, uniform and black-and-white, so the view is unsullied.

On the windswept north coast we found what we’d been looking for: the Links at Crowbush Cove. In 1998, when Crowbush began appearing on various course rankings, the provincial government capitalized on the attention and began upgrading government-owned courses and encouraging private development of new ones. As a result of this effort, the island’s standing as a golf destination is now soaring.

Crowbush, a 1994 Thomas McBroom creation, looks as if it were scooped from the British Isles and set down on PEI. Eight holes skirt spectacular sand dunes and eight more feature some sort of water, usually in the form of salty marshes. Bordered by tall, brown native grasses, the fairways pitch and roll like frozen green waves, their surfaces pocked with deep, heavy-lipped pot bunkers. On the tee of the par-3 6th hole, trees broke the wind off the ocean, but we could see the flag whipping on the narrow green 191 yards away. Marshland in front of the tee drains into a lake left of the green. Bunkers guard the right and rear of the putting surface. Aiming a full 20 yards to the right turned out to be the correct play.

After playing, we fortified ourselves with big buckets of steamed mussels—an island specialty—in the colonial-style clubhouse, then prepared to take on Dundarave, a course that rivals Crowbush for beauty and toughness. This new Michael Hurdzan-Dana Fry track lies next to the venerable Brudenell River Course at the Brudenell Golf Resort. Like Crowbush, Dundarave is a wild, natural beauty, with knee-high brown grasses and deep ravines. However, it has an unmatched feeling of isolation as it winds through thick woods along the riverside. Another natural touch is the indigenous red-tinted sand used in the bunkers. Despite its beauty, Dundarave is a bit severe, at least in comparison to typical resort golf. While the landing areas are wide, most fairways are minefields of deep bunkers.

The Brudenell River Course, a traditional layout with flatter fairways and more moderate bunkering, offers a sharp contrast to Dundarave. A longtime stop on the Canadian Tour, the 6,591-yard course hugs the river, features dense rough and is subject to frequent high winds. Swirling gusts are the norm on the 163-yard 5th hole—called “Ink Pot”—and the 10th hole (“Shimmering Waters”), a 143-yard beauty with water front and left.

People of Scottish descent make up the largest ethnic group on PEI, and it takes little curiosity to discover evidence of these roots. The island has an official dress tartan, a school for aspiring bagpipers, town names like New Glasgow—and a selection of golf courses that would make the Scottish forefathers proud.