Seventeen years ago, Geoff Shackelford was somewhat disillusioned with the direction golf was headed. The acclaimed golf commentator and author, and future Golf Channel analyst, had serious issues with the way the USGA was operating and had become indifferent toward professional tour golf which, he felt, was now a dreary procession of long drives and short-iron approaches. The essence of creative, interesting golf—indeed the very soul of the game—was being crushed by corporations intent on making it more science than art while lining their pockets in the process.

So, Shackelford wrote a book—his ninth—titled The Future of Golf. It aired his every grievance—among them equipment deregulation, slow play, poor course design, and worse tournament/championship set-ups. For scrutinizing individuals and organizations motivated by making a profit rather than safeguarding the future of the game, Shackelford said, it was timely and important.

We ask Shackelford about The Future of Golf and whether he thinks the game is healthier now or in a worse place than where it has been. 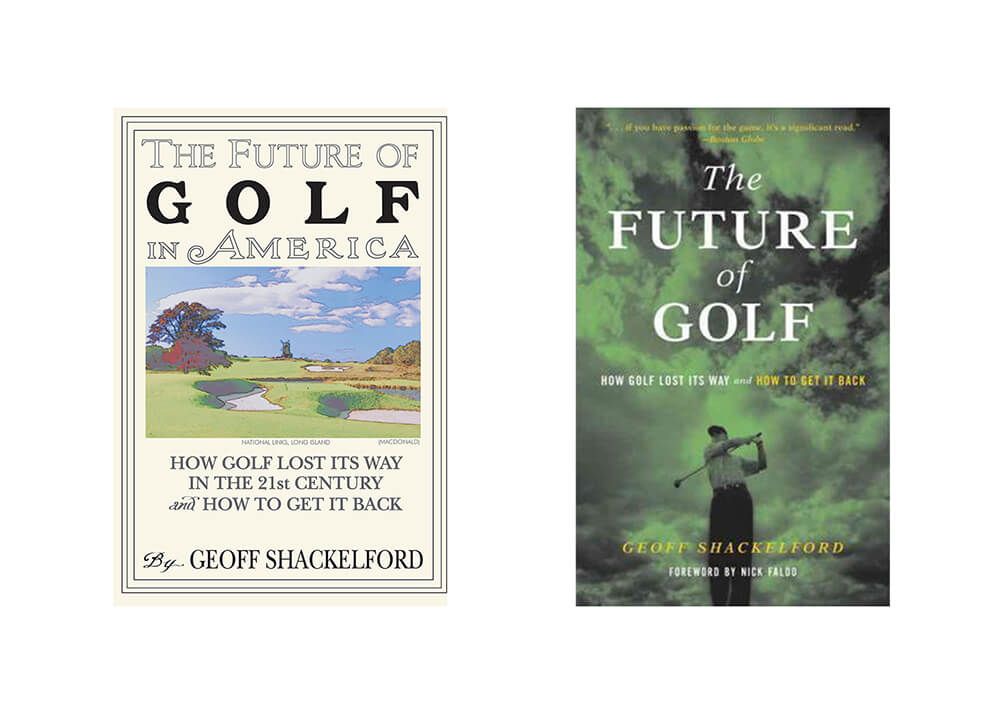 Before we talk about the book’s content, tell us the details of publication. You self-published, right?

GS: At first, I didn’t think I’d be able to find anyone willing to publish it, so I did it myself with a great cover designed by Tommy Naccarato, a devoted golf architecture historian and amazing illustrator who is now part of Gil Hanse’s team. The book was originally called The Future of Golf in America—a nod to George Thomas’s Golf Architecture in America—and consisted of original material plus a number of columns I’d written for Golfdom, the Los Angeles Times, Golf Magazine, Golf World, and yes, even LINKS. I’ve long forgotten how many it sold, but it was enough to get Sasquatch Books’s attention. They bought the rights, had Nick Faldo write a foreword, and sadly changed the cover to something entirely different and not very appealing which was a shame.

What sort of feedback did you get?

GS: From friends and golfers it was nearly all positive, and it got some very positive reviews on book sites. But it was very different to what people in the industry were saying. A lot of people said I was nuts, and I definitely lost a few friends, in the USGA especially. It was pretty radioactive.

In a nutshell, can you summarize what you thought was wrong with the game?

GS: Ha, it would need to be a really big nutshell. Basically, I sensed the game was in a dark place with the governing bodies asleep at the wheel and equipment manufacturers taking advantage of their wealth to more or less dictate the way the game was going. The ball and clubs were just out of control. I mean, the driver head went from something like 200cc to 400cc and bigger in the space of a few years, and the new urethane-covered balls combined the distance of old Surlyn balls with the feel of balatas.

Equipment was being allowed to “progress” far too rapidly, and it was changing the nature of the game. The result of it all was that golf courses needed to spend vast amounts of money just to keep up, and the USGA, R&A, PGA Tour, etc., felt they had to grow long, thick rough, narrow the fairways, and make greens ridiculously fast just to keep the winning scores down. Then, after successfully inhibiting the players and keeping the winning score in check, they felt everything was as it should be. But with players hitting high, quick-stopping short irons into every green or hacking out of silly rough, the golf had become boring to watch.

Playing devil’s advocate for a moment: You basically spent 222 pages complaining. And it’s fair to say you’ve never been slow to find fault or criticize somebody/thing that contradicts your views. Are you a bit of a downer?

GS: I’ve never had a problem being labeled a downer. If people want to think of me as that for pointing out stuff I think detracts from the game, then so be it. People say to me if you’re negative in any way at all, you’re not growing the game. And if you’re not giving manufacturers free rein to develop whatever they want then you must be anti-capitalist.

A lot has changed since 2004, obviously.

GS: It has, and it hasn’t. The manufacturers still basically control golf and, though it certainly has departments like the Green Section and the museum/library that benefit the game, the USGA (and R&A) is still maddeningly slow in moving to reduce the undesirable and costly effects of equipment advances. I am hopeful the changes that seem likely to happen will be a step in the right direction, though.

And there have been plenty of really positive developments since the book came out. The return to Golden Age design principles that championed natural over man-made, subtle over ostentatious, cost-effective over costly, environmentally friendly over environmentally abusive, and strategic over penal has been a very welcome development. Designers like Gil [Hanse], Coore & Crenshaw, Doak, Kidd, DeVries, etc., have built many fabulous courses over the last couple of decades. The rise, or return, of short courses is also really cool. A lot of the great par-3 courses we’re seeing are part of expensive resorts, but places like the Bobby Jones Golf Course in Atlanta and Belmont in Virginia are affordable and accessible, and great examples of what cities should be doing.

The everyday game still takes cues from the pro tours, but not nearly as many as it used to. The PGA Tour isn’t really the model for the everyday game now; its values are becoming different, and the two sides of the game are drifting further apart. I’m certainly not keen on where the pro game is headed—I said the PGA Tour was becoming a bore in the book, and nothing has happened in the years since to change my mind. But I’m very bullish about the everyday game.

What about the internet? (Editor’s note: Shackelford now has more than 70,000 followers on Twitter)

GS: Social media was in its nascent stage in 2004, but it’s obviously having a profound effect on the game. Everyone can now get involved in the conversation and share their opinion which isn’t always ideal, but it’s certainly better than only a very select few having a voice.

Going back to equipment, Bobby Jones first talked about the possibility of mandating a tournament ball for professionals back in the 1930s. Do you think it’ll ever happen, perhaps at the Masters?

GS: Recent aerial pictures of the work Augusta National is currently doing to the course would suggest otherwise. There was one showing a new back tee being built at the 15th and another at the 11th. And that’s in addition to what they did at the 13th. So, the club is obviously still happy to keep adding distance.

It raises the question, though, of other clubs enforcing rolled-back balls for their course. I’m surprised it hasn’t happened already but at some point a club is going to grow tired of making changes forced on them by ever-changing equipment and stipulate a certain ball be used on its course. It happened years ago with spikes and cleats—I believe Riviera Country Club was the first course to ban metal spikes entirely. It was unpopular at first, but soon everywhere was doing it.

A tournament ball, or any form of rollback, would be bad for the manufacturers, wouldn’t it?

GS: I really don’t think so. Actually, I think they’re making some poor business decisions and backing themselves into a corner. They’re publicly traded companies in some cases, and don’t want to rock the boat by making big changes. But I think the USGA and R&A are close to making some important decisions that will limit the distance the ball goes, and if/when they do, the manufacturers are going to have to market balls they’ve been contesting for years.

Notwithstanding the current lengthening of an already long course, you’ve been pretty complimentary of Augusta National Chairman Fred Ridley. What about new USGA CEO Mike Whan?

GS: He did such a good job at the LPGA, and I’m expecting good things from him at the USGA. His recent comments about not understanding why some people have a problem with equipment bifurcation were very revealing. He was probably the best choice to replace Mike Davis, but he has been known to go off-script a bit and will need to be careful. I think he could have a very positive influence on the game, though.

What about the future of pro golf and the Super League? Could you have seen that coming in 2004, and could it be good for the game?

GS: Something like this happening was only a matter of time. The new league, whatever it’s called and whoever owns it, would obviously be an entertainment product that doesn’t necessarily want what’s best for the future of the sport. It will only exist for one reason. But my hope is it sort of goes the same way as NASCAR with its restrictor plates or baseball with aluminum bats. I said in the book those sports had created their regulations to maintain entertainment value, safety, and the sport’s integrity. It’s highly unlikely, of course, but could the new league be a pioneer for sensible equipment standards?

What is Your Favorite Golf Book?

The Best Public Golf in Idaho