In the first of our four-part LINKS Magazine series, Scotland has emerged as the leading country in the United Kingdom & Ireland region. Though unlikely to shock many readers, the fact that Scotland finished a solitary point (out of 100) ahead of second-placed England may surprise.

In order to produce our rankings, we looked at the quantity and quality of golf courses in each country and considered the various elements that make a destination desirable to the traveling golfer. We didn’t just focus on the best and the most famous courses; we also factored in accessibility, history, and affordability. England was able to push Scotland because of the sheer volume of excellent golf across the country, and the fact that its Top 100-caliber courses are, on average, almost $50 cheaper to play than those in Scotland. So while Scotland pips England when it comes to a Bucket List, money-no-object-type tour of the very best courses in the country, in terms of putting together a Value itinerary of golf courses under $150 per round, England is a world beater.

The other great value destination in this part of the world is Wales, whose best courses are not only open and accessible to all, they are essentially half the price to play. Along with Scotland, Ireland, and Northern Ireland, Wales also has more golf courses per capita than the U.S., and only finished behind Ireland in fourth place because of the appeal of Ireland’s leading 5–15 courses. Despite lofty green fees, the likes of Ballybunion, Lahinch, Portmarnock, Adare Manor, Old Head, Tralee, and European Club remain enormously popular with visiting golfers. As do the Big Two in Northern Ireland—Royal Portrush and Royal County Down. The success of the 2019 Open Championship at Royal Portrush has shone a spotlight squarely on Northern Ireland as a golf destination, and it trailed the other four countries here only because the back-up options are not quite to the same standard as they are elsewhere. Plus, the competition in this region is awfully strong.

We hope readers will find these rankings interesting and perhaps useful when planning a golf trip abroad. Look for similar features later in the year, as we also rank the best golf nations of Europe, Asia/Oceania, and the Rest of the World. 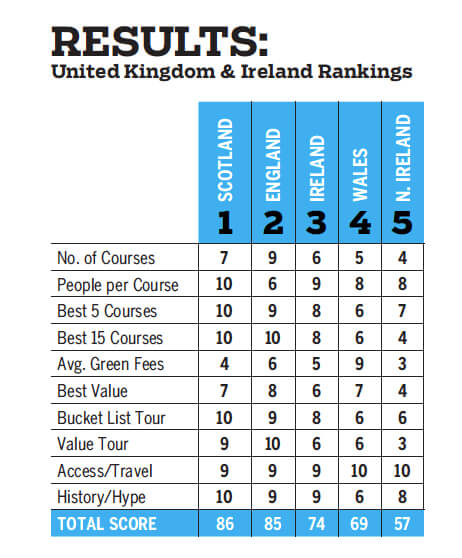 HOW WE SCORED THEM:

In order to properly consider the quality of a golf country, it’s important to look at both a small- and medium-sized sample of its best available golf courses. With the exception of the United States, Scotland’s Top 5 courses are unrivaled, but limiting the scope to just five would allow a small nation like Northern Ireland to compete with bigger countries because its best two courses are world-class and its next best, Portstewart and Ardglass, are also great charmers. Where the likes of England, Scotland, and Ireland separate themselves from Wales and Northern Ireland is when you consider more than just the leading handful of courses. It is here, with an expanded list of the Top 15 or more, that the strength of English golf becomes apparent. The 20th best course in England, for example, would probably rank third or fourth in Northern Ireland and Wales, and probably Top 10 in Ireland.

Here we considered only courses that appear on the Top 100 lists for the UK & Ireland in both Golf World and Golf Monthly, the two leading golf publications in the UK. We awarded points as follows:

When money is no object…

While some readers plan their golf trips to a strict budget, others are only interested in hitting the premier tracks and ticking the famous courses off their Bucket List. For such readers, a 10-day tour of Scotland’s best courses is the golf trip of a lifetime and would include as a starting point St. Andrews (Old Course), Muirfield, Royal Dornoch, Trump Turnberry (Ailsa), Carnoustie, North Berwick, and Kingsbarns, as well as a selection from the likes of Royal Aberdeen, Prestwick, Royal Troon, Machrihanish, Castle Stuart, Ardfin, and Gleneagles. All great options.

Similarly, in England an open-checkbook 10-course trip would involve a mix of brilliant heathland courses and famous Open rota links. Scotland just shades England in this category, but England reverses the result when it comes to a Value Tour, where 10 courses under U.S. $150 are played. The choices in England are brilliantly varied and fun, from quirky links like St. Enodoc, Royal West Norfolk, Ganton, Saunton (East/ West), Hunstanton, and Silloth on Solway to an array of charming heathland tests around London and elsewhere. Incredibly, each of Woodhall Spa, West Sussex, Woking, Alwoodley, Worplesdon, West Hill, Notts, Moortown, and The Addington can be played for under $150 per round in peak season. As can Royal Worlington & Newmarket, which is arguably the best nine-hole golf course in the world and can be played all day for around $100, or for less than $40 in the afternoon.

Relatively speaking, the other country that performs better in the Value Trip category is Wales, primarily because with the exception of Royal Porthcawl each of its best 10 courses can be played in peak season for under $150. A similarly priced itinerary in Ireland would take in gems like Carne, Enniscrone, Dooks, Portsalon, and Rosapenna, but skip all of the country’s big guns.

ENGLAND – Access to Swinley Forest and Rye is difficult, but otherwise Top 100 (UK & I) courses are accessible. (9)

IRELAND – All Top 100 (UK & I) courses are accessible. Self-driving, however, is more difficult than in the UK because of narrow roads and Gaelic signage in some areas (i.e., North-West Coast). (9)

SCOTLAND – The Home of Golf is always in fashion. (10)

ENGLAND – Lots of history and The Open is back (Sandwich) in 2020. Non-Open rota areas are perennially underrated in England. (9)

IRELAND – Green fees on the rise again suggest that Ireland is back as one of the world’s most desirable destinations. Playing the Irish Open at historic venues, plus a future Ryder Cup at Adare Manor, have helped the aura of Irish golf. (9)

N.IRELAND – Royal Portrush and Royal County Down are important courses globally, and the 2019 Open reinforced the magic of this small country as a golf destination. (8)

WALES – There is a great golf culture and golf history in Wales, but it remains very much off radar and underappreciated. (6)

What did you think of part one in our Ranking the World series? Let us know in the comments section below!

Getting TPC Sawgrass Prepared for The Players