Viewed from the air, the waterways of the Carolina Lowcountry look like the circulatory system gone haywire, an impossibly elaborate tracery of veins, arteries, capillaries, and vessels, all of them snaking and switchbacking along their mysterious courses. As networks go, the region’s roads pale in complexity—residents know that the best way to enjoy the Lowcountry is from the deck of a boat. From this vantage point the scenery—the grand homes and historic towns, the long stretches of shoreline clad in palmetto and live oak—scrolls by at the relaxed pace of a good glass of wine.

Oh, and there are golf courses, too. Consider how so many of the best of coastal Carolina and Georgia can be easily reached from the water—Kiawah Island, Harbour Town, and Sea Island, just for starters—and the idea of dumping the rental car for mint juleps aboard a piloted cruise starts to sound pretty appealing. This was the logic behind PerryGolf’s first-ever foray into the U.S. golf-travel market, and the company best known for its custom tours of the links of the British Isles came up with an offering as unique as it is luxurious.

The craft available for Lowcountry cruising is the Freedom, a 104-foot yacht owned by McMillen Yachts, Inc. of Beaufort, South Carolina and Newport, Rhode Island. The alliance between McMillen and PerryGolf was borne out of fortunate circumstances. Freedom, along with the rest of the McMillen fleet, spends its summer in Newport, but in the north spring and fall see less demand for charters. These seasons are, however, ideal for golf in the Lowcountry, and PerryGolf brought to the table a well-heeled audience accustomed to travel by boat. The connection was a natural one.

These days, the word “yacht” conjures up images of sleek behemoths—all tinted glass, hard lines, and aggressively modern interiors. But Freedom, named in honor of the American sesquicentennial year of its launch, 1926, is a product of a more elegant age. As with golf design, yacht-building had its own Golden Age—both arts flourished during the interwar period—and its architect was John Trumpy, who could safely be described as the Alister MacKenzie of his field.

Despite being the sole surviving sister ship of the former Presidential yacht, the Sequoia, this wooden-hulled treasure was a shadow of her former self when Earl McMillen acquired her in 2001 for all of $100. In the 1970s, Freedom had even been pressed into smuggling refugees from Cuba.

“A friend contacted me to say that if I did not step in at once the boat was going to be hauled out and cut up,” McMillen recalled. The doomed vessel had even been rechristened—ironically, depressingly—Sunset. “I immediately flew down to Florida, just south of Jacksonvile, and inspected the boat.” 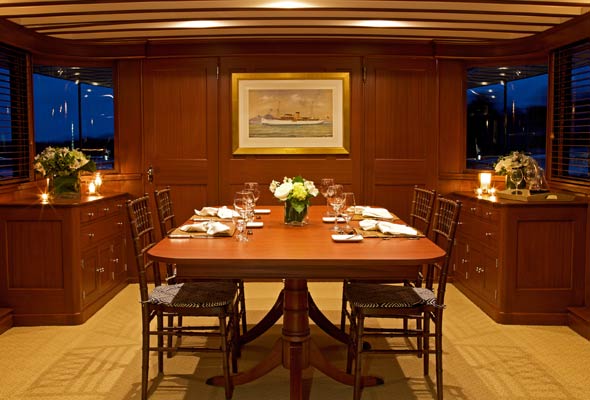 What he discovered was a prime candidate for restoration, which took place over five years to the tune of $7 million. “We worked very hard to preserve as many of the original John Trumpy characteristics as possible. Mechanically she has been modernized, but aesthetically she’s 1926 Trumpy.”

It’s not known whether the original Freedom also came equipped with rainhead showers, making washing up onboard not dissimilar to the experience at, say, Merion or Walton Heath—except for the fact that the shower is approximiately the size of a phone booth. But we’ll leave that question to the historians. Suffice it so say they are very nice, as are the rest of Freedom’s spaces, which have been outfitted in sophisticated style by the interior designer Elizabeth McMillen, Earl’s wife, who touched the right thematic bases in terms of accent colors (red, white, and blue) without going overboard (sorry) with the nautical references.

Below deck there are five surprisingly spacious staterooms (Freedom sleeps ten), four of which enjoy en suite bathrooms. On the main deck there’s an elegant dining room paneled in mahogany; a sisal-carpeted living room with a bar, an array of comfy chairs, and a flat-screen TV tucked away within custom cabinetry. The place to be on the yacht, though, is the uppermost boat deck—reached by ladder, the oversized double chaise toward the stern is ideal for stretching out and enjoying the sun and scenery.

Our group, hosted by PerryGolf president Gordon Dalgleish, met the Freedom on the dock at Palmetto Bluff, south of Bluffton. This enormous 20,000-acre property is mostly given over to wilderness, enveloping the resort in a bubble of tranquility. The Inn and its surrounding cottages share the hallmarks of the region’s vernacular architecture—large verandas, high ceilings, hipped metal roofs, and plenty of cross-ventilation. Shade is found in abundance, too—if you have a thing for ancient gnarled oaks and Spanish moss, this is a good place to be.

Palmetto Bluff’s on-site golf offering is the May River Golf Club, a 2004 Jack Nicklaus design. Early the next morning, we arrived on the first tee and hit our drives into fog so dense that it felt like playing into the snow-covered screen of an old black-and-white television. We couldn’t see more than 20 yards in front of us, so the architectural features of those first three holes will remain undescribed in this space. 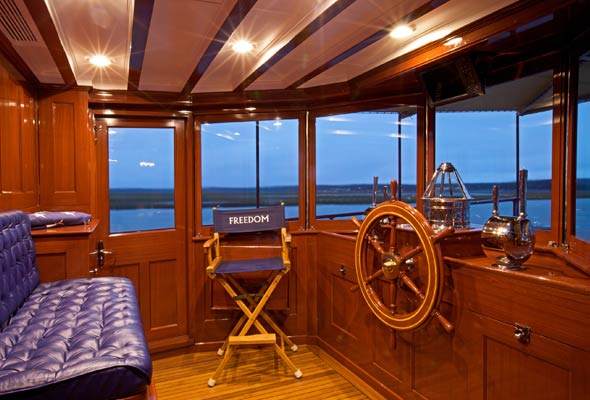 When the veil lifted, however, May River revealed itself to be a striking golf course—challenging, yes, but also attractively textured and full of variety. Some of the design decisions could even be called risky—the 7th, an enticingly short par four of 336 yards, features a splinter of a green flanked by marshland short and long. The second shot on the bold three-shot 10th, meanwhile, is menaced by both a broad swamp and a lone tree standing sentinel on the beeline to the green. And the 15th is home to a creatively shaped punchbowl green.

Not every gamble pays off, but quirky is not a term often used to describe the Nicklaus oeuvre, so it was nice to see something different. May River’s ambitious design combines with a terrific natural setting—the course clearly ranks among the Golden Bear’s elite, in a league with Muirfield Village, Mexico’s Cabo del Sol, and Mayacama, in the Sonoma wine country.

After lunch, we clambered back on board for a leisurely three-hour cruise up to Beaufort. Perhaps the most dramatic moment occurred when we entered the open waters of Port Royal Sound and the temperature dropped 20 degrees—our first reminder of the Atlantic’s proximity—sending everyone scrambling below deck for sweaters. That’s about as exciting as it should get on Freedom, though.

Beaufort, one of the wealthiest cities in America before the Civil War, was occupied by Union forces during that conflict, who for the most part left its buildings and infrastructure intact. Today, it’s a cozy town of boutiques, galleries, and leafy side streets, full of southern charm.

The next morning we cheated and drove southwest to the Chechessee Creek Club, in Okatie, South Carolina. (I hasten to add, though, that the club’s dock could have greeted the Freedom, had we wished.) After a brief warmup, we were out on the golf course, where this much quickly became clear: Chechessee is tailored to its swath of piney Lowcountry as perfectly as a Jermyn Street suit is to its wearer. The style of the course, designed by Coore & Crenshaw, is subtle yet sophisticated, the atmosphere of the club traditional yet relaxed. It’s a place where the game can be enjoyed in a simple, distilled form that’s nourishing to a golfer’s soul. 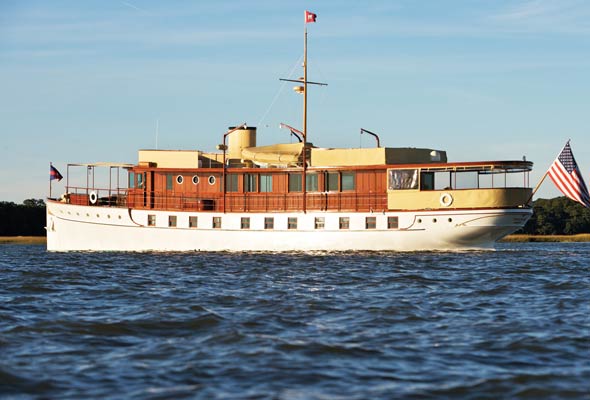 The beauty of Chechessee is that it’s a course that can be enjoyed equally by an eight-year old, an 80-year-old, or anyone in between. It sounds like a cliché and many clubs claim this, of course, but seldom is it actually true. The key, in this case, rests with Chechessee’s greens. Bill Coore has said he drew inspiration from Seth Raynor’s Yeamans Hall, just up the road in Charleston—most are push-up affairs, bunkered on the sides but open in front to encourage the bump-and-run. But more than a few—like the gorgeous par-three 7th alongside the eponymous creek—also feature false fronts, so the weight of the approach is put to the test. And once on the dance floor, the greens are well-contoured and often dangerously quick.

Chechessee is something of a golf purist litmus test. Our group agreed it is “quiet, understated”—this was Coore & Crenshaw’s mission statement here—though some doubtless value those qualities more than others. It is not long on “wow moments” or big, bold features—it’s just consistently solid golf with no frills.

The property is mostly dead flat, but if nothing else, it does make for an indisputably easy walk. Swift play is the club’s mantra, and our group finished in three-and-a-half hours without once rushing a shot. Devouring a plate of fried green tomatoes on the clubhouse patio afterward, I reflected on how easy (in every way) the morning had been, and had a fairly serious internal debate about tiptoeing away from the table and heading right back to the first tee. But it was time to say goodbye to Freedom.

When I checked back in this spring, Gordon Dalgleish reported that interest in the first full year of Lowcountry cruises has been strong. “Most potential clients look at the resorts, the public-access options, but we’ve had one fellow exploring the idea of playing private clubs like Frederica, Berkeley Hall, and Cassique.” One could also pull a group together and float up to Harbour Town for Heritage week, or explore Savannah and Charleston as part of a couples’ trip. Whatever one chooses, there’s no better way to take in the many varieties of Lowcountry golf in vintage style, so let your imagination be your guide. The yacht is called Freedom, after all…

Top 5 TPC Courses You Can Play