What is the current state of golf in the U.S.?

Using recently released data courtesy of the National Golf Foundation, the industry leader in objective golf research and information, the following is a brief overview of the past year (or so) that’ll ensure you’re more informed when you’re talking about the game we love—whether with a playing partner on the course, buddies in the club’s grill room, or the non-golfer guy or gal at the cocktail party who “heard” that golf was in dire straits until Covid.

Are there really more golfers?

This golfer total has seen a net gain of more than 800,000 the past two years. If you’re wondering whether that’s a lot, consider that increase is greater than the total population of cities like Seattle, Denver, or Washington, D.C.

It’s important to recognize that this change accounts for people who took up golf and returned to the game after some time away, but also those who left golf for any number of reasons: some were casual golfers, while others had family, job, financial, or health concerns. And given that golf is a game of a lifetime, still others aged out or passed on.

Now, the U.S. doesn’t have as many golfers as it did during its pre-social-media peak, but there are more today than back in the early 1990s when a youngster named Tiger turned pro and shook up the golf world. While Tiger made golf “cool” and spawned a wave of new players around the turn of the century, a significant development from that time isn’t talked about enough. Yes, there was a jump in the number of golfers, but the average rounds played per golfer actually dropped. What that means is that a good number of those who gave golf a try back then 1) didn’t play much and 2) didn’t stick around very long.

That high-water participation number was actually somewhat overinflated. As many of us diehards recognize, what really hasn’t changed through the years is that there will always be a sizeable group of very dedicated golfers. It’s these avid participants who really move the needle when it comes to play and purchases. 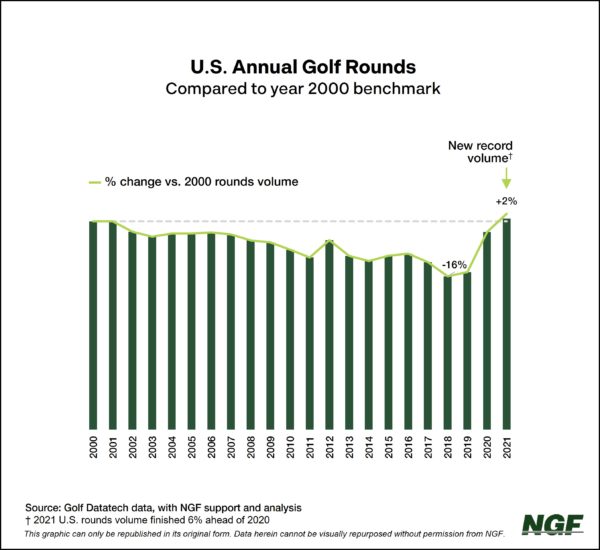 How much has play been up?

You might have noticed that it can be hard to get a tee time.

Indeed, play surged at golf courses across the U.S. throughout the second half of 2020 after those pesky Covid restrictions were lifted. That resulted in more than 500 million rounds of golf being played nationwide for the first time since before the Great Recession, which itself had a profound and lasting impact on the game.

And in 2021, rounds of golf were up another five percent, per the NGF and Golf Datatech. That would mean an increase upwards of 25 million additional rounds.

One of the big mistakes for folks outside of golf is using course closures as a simplistic measuring stick for the health of the game.

But here’s why that’s misguided. 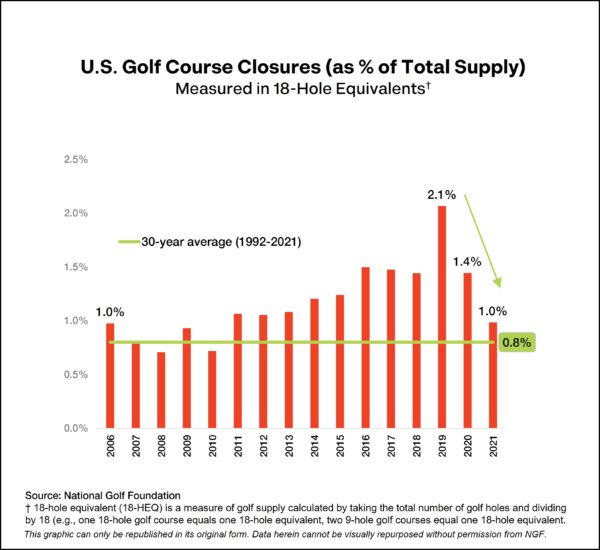 When it comes to golf, the U.S. has actually been oversupplied for years. Consider there are more than three times as many golf courses nationwide than ubiquitous Walmart stores—more than 16,000 in total in NGF’s facility database. The balance between golf course supply and golfer demand is much better of late, the result of increased play these past two years, a reduction in the number of underperforming courses, and overall improved facility health.

As golfers, it of course pains us to see courses shut down. But businesses close every year, in every industry. And you’d be hard pressed to find many businesses with as much in-demand land as golf courses, which average about 150 acres for an 18-hole layout.

So yes, golf courses will continue to close in years to come. That doesn’t necessarily have a direct bearing on the game’s overall health. As if you couldn’t tell by the full tee sheets at your local course, golf is thriving at the moment and the opportunity is there for further growth. The big question is whether the momentum spurred by the coronavirus these past two years can be maintained.

LINKS Golf Podcast Episode 57: What Does the Data Say About the Golf Business in 2020?