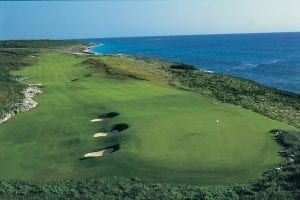 The Bahamas is suddenly a hotbed of Caribbean golf activity, with the opening of the mammoth Baha Mar resort, but also news that the much more intimate Abaco Club on Great Abaco Island has been sold.

The 10-year-old private sporting club was recently acquired by Southworth Development, which owns and operates private clubs and residential communities in the US and overseas, including Creighton Farms in Virginia and Machrihanish Dunes in Scotland. Southworth is planning a multi-million-dollar renovation of the existing facilities at The Abaco Club, as well as the addition of a state-of-the-art golf practice facility (to be designed by course architect Bobby Weed) plus a new marina and boathouse.

The 453-acre club already boasts one of the Caribbean’s most highly regarded golf courses, a seaside layout—often described as a “tropical links”—designed by Donald Steel and Tom Mackenzie. The front nine runs along the sands of Winding Bay, while the back is perched on a ridge, offering stunning views as well as strong winds.

The club offers a choice of memberships (which include reciprocal privileges at other Southworth properties), as well as a variety of homes and homesites.