Tom Simpson might be the greatest architect the average American golfer has never heard of. Born in England in 1877, he was a Cambridge-educated lawyer and renaissance man whose independent wealth allowed him to pursue a career in architecture on his own terms. Famed for arriving at work sites in a chauffeur-driven Rolls-Royce, he cut an imperious figure, clashing with the same club committees (figures of “invincible ignorance,” by his reckoning) he’d charged ultra-premium fees.

Yet he (usually) got away with it, because he delivered superb golf, on budget. Beginning in 1910, he formed a partnership with Herbert Fowler, who came from a similarly affluent background and already had prominent designs such as Walton Heath (Old) to his credit. The pair worked off and on for nearly 20 years, with Simpson stationed primarily in Europe.

Simpson was a superb illustrator and among the first to make a compelling argument for golf architecture as art. One of his favorite phrases: “It is only the mad masterpieces that remain in the memory.” Playing his courses a half century after his death in 1964, “madness” is not what jumps to mind. Rather, Simpson’s strategic cunning and artistic genius are both clearly in evidence.

Design Signature
Another essential Simpson line—“The vital thing about a hole is that it should either be more difficult than it looks or look more difficult than it is”—sums up his work to a T. His greens (which are routinely wonderful) often appear nearly undefended from the fairway, which is when alarm bells should sound in the player’s mind. That said, the expert should still find plenty of scoring opportunities; Simpson’s greater priority was the everyday pleasure of the modestly skilled club golfer.

Simpson ardently believed in the need for imperfection. He wrote: “We therefore intend to include one thoroughly amusing but bad hole for the sake of variety and a brief interval of mental tranquility.” It’s a fun thought experiment to consider which courses he would have considered to serve this function. 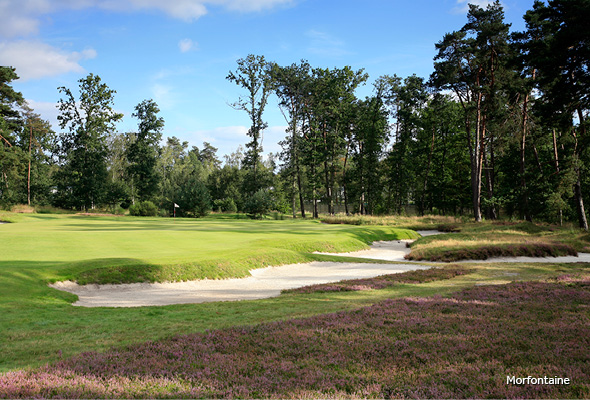 Best Course
Morfontaine, the exclusive club just outside of Paris, holds 27 holes that combine the feel of the English heathlands with native rock outcroppings and the splendid isolation of an estate course. Morfontaine will never be accused of being over-bunkered—Simpson preferred to leave out the definition such hazards provide, letting the natural drape of the land provoke the golfer into diffident strokes. Depth perception is frequently foxed, and the secrets of the greens are only revealed once the player has reached the putting surface. The same cannot be said of the club’s original nine, the Valliere: Built a decade and a half earlier, in 1911, these greens find Simpson in a wild, “experimental” mood and prove an absolute riot to play.

Most Representative
Occupying a flattish but tranquil swath of Surrey heathland, England’s New Zealand Golf Club is, at first glance, a museum piece, and its features have a way of stealing off with half-strokes or more. The combination of white stakes and centerline bunkering at the par-four 13th pays homage to nearby Woking (Simpson’s favorite course), while the wide-open green front of the finishing hole is exceptionally clever—it seems to invite the bounding approach, but a dip and a buried-elephant mound conspire to kick approaches every which way.

Sleepers
Frequently overlooked by travelers to Ireland, County Louth Golf Club (also known as Baltray) is one of that country’s best. Despite scoring only middling marks for scenic beauty, it offers consistently compelling golf. Holes like the 12th, with its gun-sight approach through the dunes, and the 14th, a killer short four where a pimple just short of the green wreaks havoc with all but the most perfectly measured pitches, are a couple of its finer moments. One of Simpson’s last works, the recently restored Hardelot (Les Pins), is half an hour from the Eurotunnel: Its charming setting—sweeps of exposed sand bordered by a towering coastal pine forest—makes it well worth the hop across the English Channel. 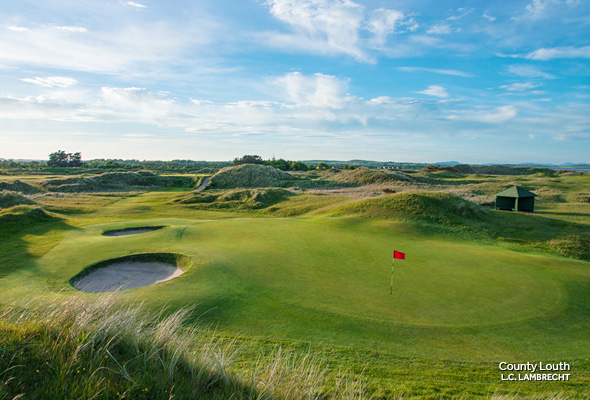 Most Famous Holes
Some of the architect’s best-loved holes can be found on “evolutionary” British courses where the design credit is spread around—places like Cruden Bay and Ballybunion (Old), where he was responsible for, among others, the grand adventure that is the par-five 13th. The par-three 13th at Muirfield, which plays uphill to an amphitheater green, is one of the game’s purest compositions—and another Simpson creation.

Further Reading
First published in 1929, The Architectural Side of Golf, co-written with H.N. Wethered, is a classic of the genre—lucidly written, highly entertaining, and loaded with beautiful hole illustrations that leave no doubt as to Simpson’s artistic vision. It’s still in print as part of the Classics of Golf series (classicsofgolf.com). Henry Longhurst’s obituary of the artist is on the website of the Tom Simpson Society, tomsimpson.org.uk.

Michigan Golf: Where to Play