Stories of triumph over adversity are inspirational and uplifting. The saga of the Golf Club at SouthShore is that kind of success story. For more than a decade, SouthShore reigned as an exclusive enclave within the Lake Las Vegas community, 17 miles from the Strip. Then a troubled economy left members on the verge of losing the club. In 2009 Touchstone Golf came in to manage SouthShore. Although 120 members rejoined, it was clear that the hard work of rebuilding the club to its past glory was just beginning.

In his pitch to prospects, Director of Sales Mark Barrett knows his primary selling point is the Jack Nicklaus layout. As member Michael Polosky says, “The course is absolutely beautiful and well maintained, with a good mix of elevations.”

The 6,917-yard course falls and rises more than 300 feet, and the highest point is the 17th tee, where a dazzling view unfolds: a 320-acre freshwater lake, resort hotels and elegant homes with private boat docks. Surrounding desert hills stand in stark contrast to the lush fairways.

Perennially ranked among the best in the state, the layout challenges players with punitive bunkers and forced carries. There are several memorable holes, like the 469-yard 3rd, the No. 1 handicap, where both water and a large bunker guard the left side of the green—Head Professional Mir Wais calls it “the premium shot.” Holes like the 3rd make the front nine play three or four shots more difficult than the back, which is 455 yards shorter.

On the inward side, the 212-yard 16th, which often plays into the wind, always elicits post-round conversation: Did you get across the gorge? Even if shots do clear the chasm, it’s not uncommon for balls to end up in the very steep front bunker, leaving a difficult blind shot.

SouthShore finishes along a dramatic, exhilarating stretch of holes that occupy the highest grounds on the site. Bighorn sheep inhabit the hills and often wander down to the fairways and practice range. Overall, the layout is a great test for the members, many of whom sport low handicaps. 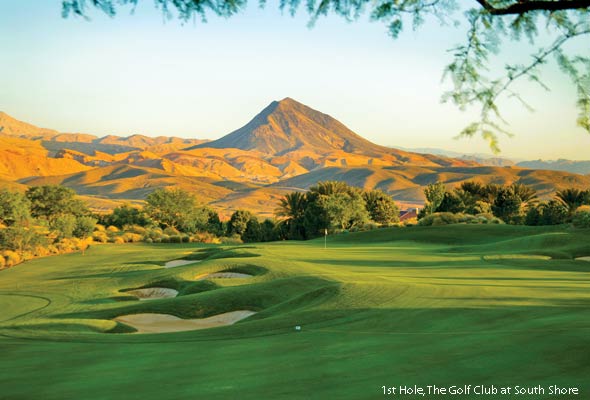 The club’s service matches the quality of the course. The staff always has clubs ready to go, and on chilly mornings members have been known to find heaters in their carts. These standards come from the top—General Manager Bill Burney even offered to look after a member’s grandchildren so she could fill out a foursome.

Despite its proximity to Sin City, SouthShore is a quiet, traditional club at a community where half the members are full-time residents. Touchstone’s extensive management experience (the company runs 18 golf courses) has guided SouthShore’s growth.

Over the past year, Barrett has added several membership categories, including one for social memberships, temporarily waived initiation fees and widened the club’s reach to the entire Las Vegas metropolitan area. The efforts have steadily increased the number of golf and social members to more than 260.

New members find there is a lot to embrace, from the course to the two-level clubhouse that provides mountain, lake and golf views from the huge picture windows and patio areas. But the scenery doesn’t distract from the excellent food, well-appointed locker rooms and a golf shop stocked with the latest upscale apparel.

Then there is the final selling point: LPGA superstar Natalie Gulbis is a long-time Lake Lake Vegas resident and SouthShore member who uses the club frequently. Approachable and generous with her time, Gulbis held a clinic for female members in 2010, giving personal attention to each participant. Her staff bag sits in the pro shop. Golfers on their way to the first tee often give it a pat for good luck, and some have even tried to purchase the bag.

But like the rest of the club, the bag is there for the enjoyment of all of SouthShore’s members. Says Wais: “That bag is not for sale!”