At the Kingsley Club near Traverse City, golfers are required to take two shots on the final tee. A bottle of Jameson’s Irish Whiskey hides inside a metal box set into the stone wall that surrounds the 18th tee, and tradition demands that players take a swig before driving off on the 422-yard hole that plays down into an undulating valley before rising to an amphitheater green. Whether to calm the nerves or work up some courage, it’s one pull golfers won’t mind hitting.

Northern Michigan golf is full of such hidden treasures, including the Kingsley Club itself, which lies at the end of an unmarked dirt road and, although private, accepts some outside play (have your home pro call ahead). Architect Mike DeVries took maximum advantage of the rolling terrain to create a firm-and-fast, fescue-laden design where the ground game is vital to scoring well. It’s reminiscent of the great heathland courses of England like Sunningdale.

Thanks to glaciers that left behind spectacular footprints and sandy soil just perfect for courses that look as good as they play, Michigan’s northern tier is made for golf. And since it’s located on the western edge of the Eastern Time Zone, sunset in the mild summers doesn’t come till 10 p.m. Forget 36 holes: How does 54 sound, with plenty of time for lunch and dinner in between?

“It’s an easy place to build golf courses,” says Tom Doak, who grew up in the state and now lives in Traverse City. “We have perfect sandy soils, plenty of natural undulation, and some beautiful trees to work with. So lots of people have been able to indulge their dream of building a golf course up here. Unfortunately, there are so many of them that only a couple of courses are making money at it, but what’s a problem for developers is a great deal for visiting golfers!”

Doak has built four courses in the state, including the newest one, The Loop at Forest Dunes in Roscommon, the first reversible course in the U.S., opening this summer. Inspired by the Old Course at St. Andrews (which  was played alternately clockwise and counterclockwise for years), Doak had wanted to build a two-way course for more than two decades. He finally found the perfect location—relatively flat, no trees—and an owner willing to take a chance. The course will switch directions on a daily basis, allowing overnight visitors to play the course both ways. 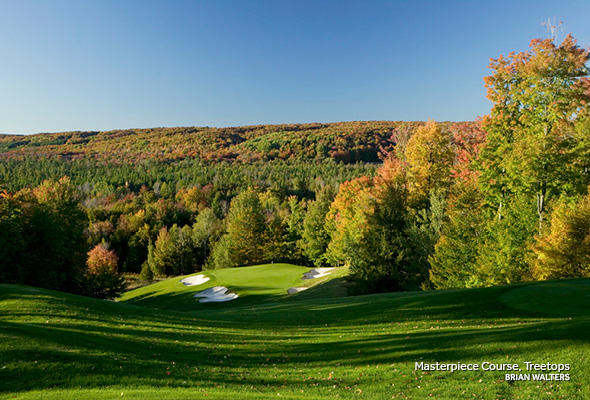 Unlike the Old Course, the holes of The Loop aren’t laid out end-to-end, which Doak says adds interest to his course. “I’d always thought that was an important part of the concept, so we wouldn’t have to build separate tees for the two different directions,” he says. “But the land had some really cool topography, so the routing changes direction a couple of times in the middle. The variety of the greens became much more interesting because several of them are approached from 90 degrees to one side, instead of straight into the back.”

The Loop is the second (and third?) course at Forest Dunes, joining an acclaimed design by Tom Weiskopf, who routed his front nine through hallways of tall red pines and sandy waste areas, while the back is more open with dunes and fescue grasses bordering and cutting through fairways and surrounding greens. Weiskopf, famous for his drivable par fours, built one here: 17 is a tempting beauty that can result in both joy and heartbreak. Forest Dunes is a bit hidden—it’s located inside Huron National Forest, not quite two hours east of Traverse City—but well worth the trip, as is a stay at the 14-room Adirondack-style lodge.

The most highly acclaimed course in northern Michigan—and one of the toughest “gets” in private golf—is the Alister MacKenzie-designed Crystal Downs, where both Doak and DeVries are members. But ask the two designers for their second favorite local layout and they’ll give the same answer: Belvedere Golf Club, about an hour north of Traverse City. The parkland course, which dates to 1927 and has hosted the Michigan Amateur a record 40 times, sits in a valley amid hillsides covered in fescue.

Perhaps the most memorable of those is at the short par-four 16th, which finishes on a bunkerless plateau set into a hillside with a steep falloff on the right side. Ken Venturi showed up at the course unannounced back in 1990 when the Ameritech Senior Open was played at the Grand Traverse Resort. He said a close friend told him he had to check out the 16th hole. The friend? Gene Sarazen. Another fan of Belvedere is Tom Watson, who spent childhood and college summers playing there.

DeVries was working for Doak in the early ’90s when they designed Black Forest in Gaylord, about an hour east of Traverse City—which in case you haven’t noticed is a good place to base a northern Michigan golf visit. The course is aptly named as Doak carved it out of nearly 400 acres of evergreen and hardwood trees and made almost every hole a refuge unto itself. There are more than 100 bunkers, while the greens tilt and contour, favoring approaches from a particular side of the fairway.

Another half-hour to the northeast is Treetops, a ski resort that becomes a first-rate golf locale in the summer with five courses, including “Threetops,” a fun par-three with lots of elevation change, and the Signature course, an upland layout with wide, lush fairways that lead to fast, undulating greens. Also worth a look is Robert Trent Jones Sr.’s Masterpiece course: According to the scorecard, the 180-yard 6th is “the hole that put Michigan golf on the map,” dropping 120 feet from tee to green and offering a panoramic view of the Pigeon River Valley. 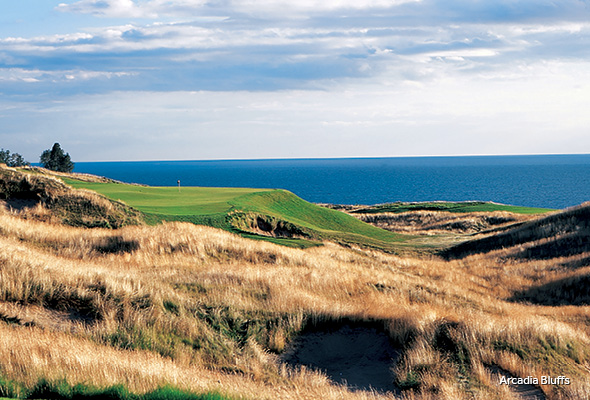 Winter skiing also yields to summer golf at Shanty Creek and Crystal Mountain. But with all due respect to Masterpiece’s 6th, Boyne Highlands was the first resort to draw serious golfers up north when the Heather course, another Jones Sr. design, opened in 1966. Skiers had been coming to Boyne since 1948, but founder Everett Kircher wanted to attract them year round. Over time, he added five more courses to Boyne Highlands and Boyne Mountain, including The Moor by Bill Newcomb, a dogleg-rich design that skirts nature-filled ponds, and a Donald Ross tribute course with close replicas of holes from Seminole, Oakland Hills, and Pinehurst No. 2, among others.

But the pride and joy of Boyne Resorts, which is the largest privately owned ski and golf corporation in the country, is The Inn at Bay Harbor and the nearby Bay Harbor Golf Club. Less than 20 years old, The Inn feels like one of those grand hotels from a bygone era, aided by its stately setting on Little Traverse Bay. The three Arthur Hills-designed nines offer three very different experiences: The Links stretches more than a mile along cliffs 140 feet above the bay; The Quarry plays in a gorge and finishes memorably along the water; and The Preserve cuts through stately hardwoods before closing with a dramatic shoreline par three. Hills also designed the just renovated Crooked Tree Golf Club, which sits high above The Inn and offers stunning views of Lake Michigan.

If lake looks are to your liking, don’t miss the state’s top public-access course, Arcadia Bluffs, about an hour southwest of Traverse City. Set on 265 treeless acres, the links-like design begins high on the property before dropping 225 feet down to the bluff, which sits almost 200 feet above Lake Michigan. Almost every hole offers stop-and-gape water views, while the fescue-covered dunes and revetted bunkers are wonderfully reminiscent of Ireland. The newly remodeled clubhouse also offers panoramic views of the lake, as do 10 of the 15 guestrooms on the top floor and the six cottages beside the 2nd hole.