There are very few places in the world, if any, where you can truly disappear and escape the realities of modern-day life. But at The Olde Farm in Bristol, Virginia, members and their guests speak volumes about crossing the cattle guards and entering a sanctuary in which golf and friendships are all that matter.

“It may sound like a cliché,” said Marc Eubanks, The Olde Farm’s general manager and former superintendent, “but the frenetic pace of modern-day life definitely seems to stop when you cross through the gates. People really do come here and escape the real world.”

On paper, this would seem to be a tall order, considering that many of the club’s members are celebrities and business and political icons. “Our members really do lose their titles when they cross the cattle guards into the club,” adds Daniel Whicker, head professional. “Once they are here, it’s not about bank accounts or achievements; it’s about a passion for golf and camaraderie.”

The Olde Farm, which sits in a natural valley in the southwestern foothills of Virginia, is the brainchild of James McGlothlin, a coal-mining baron and a lover of golf. McGlothlin grew up nearby in Grundy, Virginia, where he was one of the founders of the United Coal Company back in 1970, a company that he grew into a diversified giant known as the United Company that eventually sold in 2009.

While he may be a wealthy man, McGlothlin doesn’t judge accomplishment by the size of one’s wallet. To him, “success is enjoying your work and enjoying your friends.” And it is precisely that philosophy that led him to the rural hills of Bristol to build a place for his friends and their friends to gather and play golf.

The land is a stunning piece of property full of creeks, streams, rocks, and rolling hills. It used to be a working farm, with several barns and other structures incorporated into the course. Shortly after purchasing the land, McGlothlin invited Bobby Weed, a former Pete Dye protégé, to take a look at the site. He and Weed had worked together on the development of the Slammer & Squire Course at the World Golf Village in St. Augustine, Florida. Weed showed up in a rental car, walked the property, and in one day “found” the golf course.

“When I first walked the property,” said Weed, “I was amazed at the landscape and I realized the golf course was already here. We just brought it out and knocked the dust off of it.” 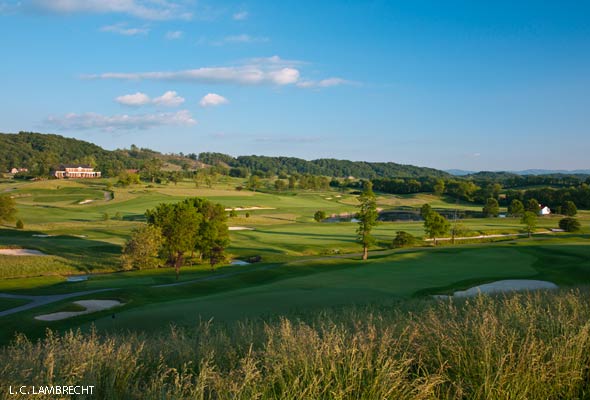 Weed’s routing was laid out in the valley, playing alongside the hills rather than up and over them, thus preserving the integrity of the valley and promoting walkability, both McGlothlin desires. “The course complements its surroundings completely,” said Kenny Schweitzer, membership director. “You can’t come here without admiring the natural beauty of the landscape.”

That landscape is clearly evident on approaching the property, but nothing prepares you for the view of the course and the Clinch Mountain range from the back porch of the clubhouse, which was patterned after Castle Hill, a home built more than 200 years ago in Charlottesville. From this vantage point, the links-style course unfolds below, with windswept grasses, rugged bunkering with fescue “eyebrows,” exposed rocks, several ponds, and Sinking Creek meandering across the bottom of the valley.

“There is a great openness to the course,” said superintendent Ryan Severidt. “This allows it to play firm and fast, which is the way it was designed to play.”

The 7,063-yard, par-71 course features bentgrass tees, fairways, and greens, and Kentucky bluegrass in the rough. It also utilizes both fine and field fescue to give it a more rugged look. Wide fairways, open entrances to greens, and large putting complexes make The Olde Farm a course anybody can enjoy. But scoring well is not easy, as the course requires strategic placement of tee shots, accurate approach shots to well-guarded greens, and a dependable putter, as there are very few flat spots on any of the putting surfaces. And Sinking Creek comes into play on seven holes.

While every hole is memorable, standouts include the 446-yard, par-four 2nd, with its intimidating downhill tee shot and well-guarded green; the 438-yard, par-four 3rd, which rides along the ridge top and offers an unimpeded view of the entire course; the devilish 386-yard, par-four 14th, which one member says has “one of the meanest greens on the course”; the 461-yard, par-four 16th, guarded down the entire right side by cattails and a pond; and the lengthy 468-yard, par-four 17th, which puts a premium on distance and accuracy. 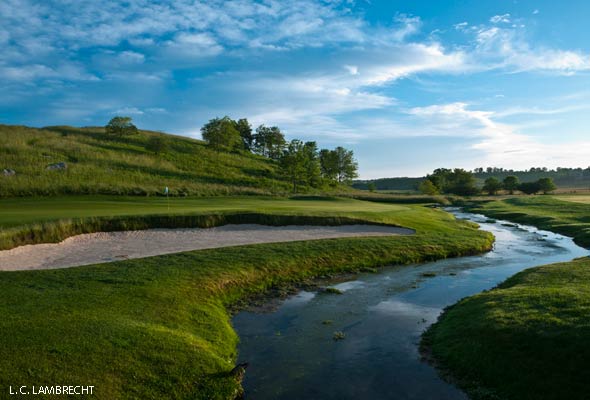 While the golf course is the crown jewel of the property, it is only part of what makes The Olde Farm so special. What really elevates the club is its culture. Despite the fact that 80 percent of the membership lives more than 100 miles away, the overriding feeling is one of camaraderie.

“It all begins with Mr. McGlothlin,” said Eubanks. “He is the common denominator that binds the eclectic group of members together.”

One of the first things McGlothlin instituted was the annual Blue-Gray Tournament, featuring three days of Ryder Cup- style competition with a Civil War theme. Which side a member is permanently allied with depends on the color of marble he or she picks out of a bag upon acceptance into the club.

“I dreamed up this idea to integrate the membership… and break down real or imagined barriers,” said McGlothlin, who picked a blue marble despite his ties to the South. “Club members from all over the country address history head on and bond together to defend the cup for their team. It has become our most cherished tradition.”

It’s not the only tradition that stands tall at The Olde Farm. The club opened in March 2000, but many of its facilities are rooted in the history of the area and the original farm. The Party Barn was previously used to store hay but has been refurbished and now serves as the club’s main dining and entertaining facility; Long Barn, a former tobacco barn, now houses the halfway house complete with two hitting nets and a putting green; Caddy Shack is a quaint log cabin created with logs from the property’s Stout home; and the clubhouse, built on the site of the original farmhouse, offers a golf shop, dining area, locker rooms, boardroom, workout facility, and wine cellar.

A few years ago, the club added three cottages along the first hole—each offering luxurious accommodations for 12 guests—and more recently the Pavilion, an incredible open-air facility alongside the 13th hole for entertaining up to 150 guests. “This place is always evolving,” said Eubanks, “because as [McGlothlin] always says, ‘if you’re staying put, then you’re not improving.’”

The Olde Farm is a place that, as one member says, “embodies all the qualities that touch our senses.” It has everything you could ever want in a golf club and more, all stemming from the vision of one man. But to his credit, it is not about him.

“It’s all about the experience of the members,” said McGlothlin. “This is a place where they can get a break from the real world and be who they want to be. And it is our job to see that they get what
they want.”

A Guide to Golf in Bermuda