That was the reply from Jacksonville businessman Jerry Sarvadi when, during a 2002 visit to Pinehurst, he and his brothers were asked, “How would you like to build a golf course in Scotland on a spectacular site next door to Muirfield?”

“You’re telling me there’s a piece of prime golf property available next to Muirfield,” said Sarvadi. “What do you mean by ‘next to’? Up in the hills a mile away?”

“No,” was the reply, “literally a stone’s throw from the Muirfield links—but with even better views over the Firth of Forth.”

Now Sarvadi was interested. Turns out he was talking to a representative of the Duke of Hamilton, laird of a 1,000-acre estate that did indeed abut the hallowed home of the Honourable Company of Edinburgh Golfers. A few weeks later Sarvadi walked the property known as the Archerfield Estate and fell in love. In 2005, The Renaissance Club was born, with a mission both simple and grand: to combine time-honored Scottish tradition with the finest in modern amenities and service.

The owners—Sarvadi, his brothers, and a group of friends from both sides of the Atlantic—took a bold first step toward their goal with the selection of course architect Tom Doak, one of the most sought-after men in the business.

Having already designed Pacific Dunes, Cape Kidnappers, Barnbougle Dunes, and Ballyneal—all ranked among the top in the world—The Renaissance Club was Doak’s first opportunity in Scotland. And he took full advantage. 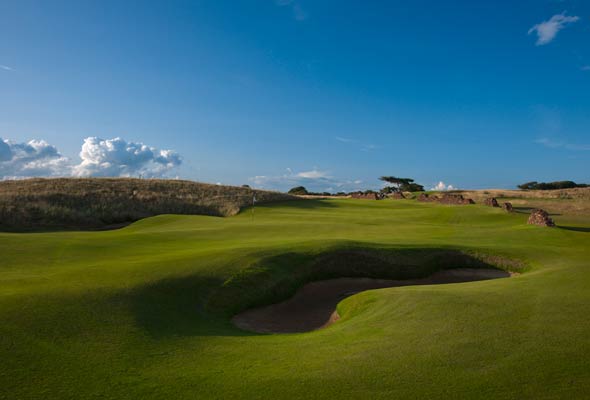 On a unique 300-acre tract, Doak crafted a series of compelling holes that began amid immense stands of pine and sycamore before emerging onto classic linksland on a bluff above the firth. When the course opened in 2008 it was hailed as one of the finest in the British Isles. However, even as they smiled at the reviews, Doak and Sarvadi knew there was the potential to make the course even better.

At the northern edge of the property, beside the Firth of Forth, was a triangle of land owned by the Honourable Company, enough land to accommodate three spectacular holes.

“When I first took Tom out to see that land, he said just one word: ‘Wow,’” says Sarvadi.

The HCEG was interested in trading the land for a piece of Sarvadi’s property, a deal that was consummated in 2005. But it took until early summer of 2011 for the environmental authorities to give its blessing. And so, just three years old, the Renaissance is experiencing a renaissance.

The original first three holes—all in the wooded sector—have been made into a practice loop, and the three new firth-side holes inserted in the very center of the course as holes 9 through 11. Several changes have been made to other holes, with the result an entirely new golf experience—a course of rich variety and unrelenting challenge, with a centerpiece par four that is sure to become one of the most famed and photographed holes in the world.

Par remains 71 but now there are five par threes instead of four, four par fives instead of three. The new course begins at original hole No. 4, threading down a deftly bunkered fairway to a green banked on the left with a massive mound that will help the slightly missed approach but penalize anything more errant. A strong opener, it measures 460 yards from the (rarely used) championship tees, but there are other markers at 431, 393, and 377. Unlike most Scottish courses, there is no set of “boxes” from which everyone must play: Golfers are encouraged to choose their own tees, even mix and match within the round, depending on wind conditions.

Hole 5 (number 8 in the original routing), the first on open linksland, is the shortest par four on the course, reachable when the wind is at one’s back. However, on either side of the drive zone juts a distinctive hazard that adds challenge and character to several holes—the remains of a centuries-old stone wall. The three-tiered green at 5 was inspired by the 12th at the Old Course in St. Andrews.

Doak clearly had some fun crafting the green complexes at Renaissance. At the par-five 7th (originally the 10th), a mound obscures the right side of the green and steep fall-offs wreak havoc with any shot that strays left or long. The sternest putting assignment comes at 8 (originally 11), a massive par four that rambles upward and rightward to a slender target that pitches several feet from back to front. On the left is a mound and pot bunkers, on the right the stone wall returns along with a lone giant sycamore, and to the rear is a wizened old Scots pine. It all makes for one beautiful beast of a hole.

On the very brink of the headland sits the tee of the new No. 10, a par four that will cause jaws to drop and knees to shake. Curving 400 yards right to left along the edge of a cliff, it is one of the few Cape holes in links golf, a bite-off-as-much-as-you-dare tee shot and then a nerve-jangling iron to a green perched on the precipice. Just offshore stands the white lighthouse of Fidra Island, said to be the inspiration for Treasure Island.

“I’ve never had a favorite hole on the course,” says Sarvadi, “but now there’s no question I do.”

The trio of new holes ends with a par three that will play roughly 175 yards from a slightly elevated tee to a green backdropped by another ancient wall. To stand on that green is to behold one of the great views in golf, a more than 180-degree panorama that extends several miles, from Arthur’s Seat (one of the seven hills that loom over the city of Edinburgh) northeastward and across the firth to the hills of Fife and further east to the North Sea.

New tees, greens, and additional yards enhance many of the remaining holes. But 15 is a brand-new par three of 200 yards to a green that will be about as welcoming as a French waiter. And the stone wall makes its final appearance on the final hole, creating a final hurdle by stretching across the fairway to menace the lengthy approach.

Shaping and seeding of the new holes and alterations was completed in the fall of 2011, but the original course will remain in play for another year, with the grand unveiling set for 2013 when the Open Championship returns to Muirfield.

“Our goal is for the Renaissance to be the best conditioned golf course in Great Britain,” says Sarvadi. “When members and their guests play here we want them to have an experience that is unsurpassed. To protect that quality, we will limit our membership: When it gets to the point that we’re seeing close to 25,000 rounds a year, we’ll start a waiting list.”

Another major part of the Renaissance experience will be the 34,000-square-foot clubhouse. Its four floors will include a fully staffed spa and fitness area, a cocktail lounge and dining room (with Michelin-star-trained chefs), plus six bedrooms to extend the accommodations currently provided by a luxurious 14-room lodge.

“We’ve tried to define what it takes to have a private club of the very highest quality,” says Sarvadi, “and we’ve narrow- ed it to four ingredients—a great golf course, a camaraderie among the members, the very best in food and service, and a comfortable clubhouse with all the amenities a discerning golfer could desire.”

The Renaissance Club is about to have all those things—and all in the birthplace of golf.