Unlike Tiger Woods, who has yet to open his first layout, Jack Nicklaus got involved with course design early on, helping Pete Dye build Harbour Town Golf Links when he was in his late 20s. (Pictured above at the site of what would become Harbour Town are, from left to right, Charles Fraser, Nicklaus, Pete Dye, and Donald O’Quinn.)

Since then, Nicklaus’s design firm has built about 385 courses in 39 states and 36 countries. Many of his best courses, including Muirfield Village, host site of this week’s Memorial Tournament, are private. But he has designed a number of great public-access layouts, too, from the Challenge at Manele in Hawaii to Punta Espada in the Dominican Republic.

His range of designs make him not only one of the most prolific architects in the game, but also one of the best. His legacy may hinge as much on the 18-hole masterpieces he has left behind around the world as the 18 major championships he has won. Here are the top 10 that you can play. 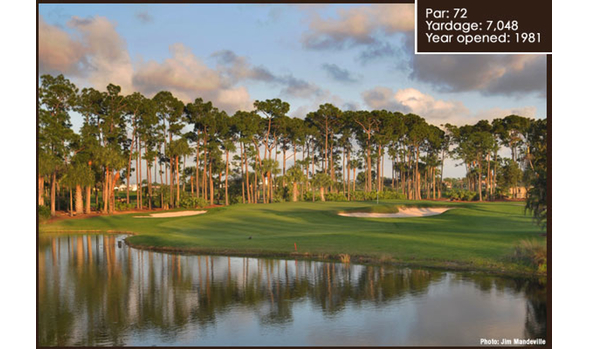 The original layout was the work of George and Tom Fazio, but Nicklaus overhauled the South Florida course in 2002. Part of Nicklaus’s work was the notoriously difficult finish—the 15th through 17th holes, a pair of par threes sandwiching a par four, are known as the “Bear Trap.” The site of the 1983 Ryder Cup and 1987 PGA Championship, the Champion course is now home to the Honda Classic. 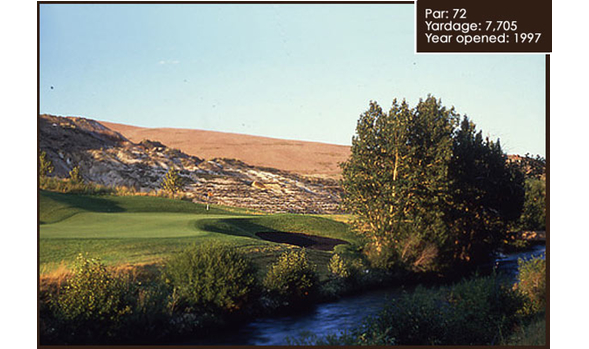 Built on a former ore mine and cooper-smelting facility that became one of the biggest Federal EPA Superfund waste sites in the country, Old Works provided Nicklaus with one of his greatest challenges. He had to cap much of the course’s footprint and line the bottoms of the greens, bunkers, lakes and even tree roots to prevent upward leakage. The site’s history is evident in the black slag used for bunker sand. 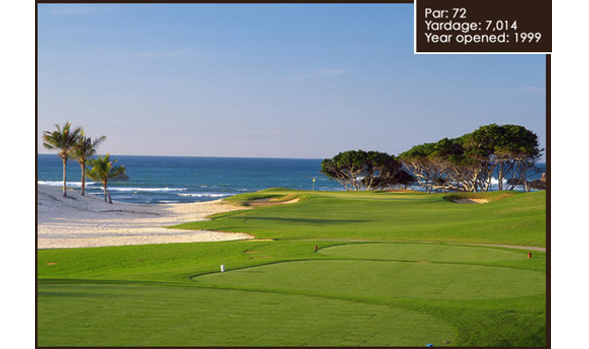 It would be easy to focus on hole 3B, one of the most spectacular one-shotters in the world. The 194-yarder features the world’s only green set on a natural island. Players can walk to the putting surface during low tide but have to take an amphibious golf cart during high tide. As memorable as that hole is, the rest of the course is impressive, with eight holes bordering either the Pacific or Banderas Bay. Nicklaus returned to build a second course at Punta Mita, called Bahia. 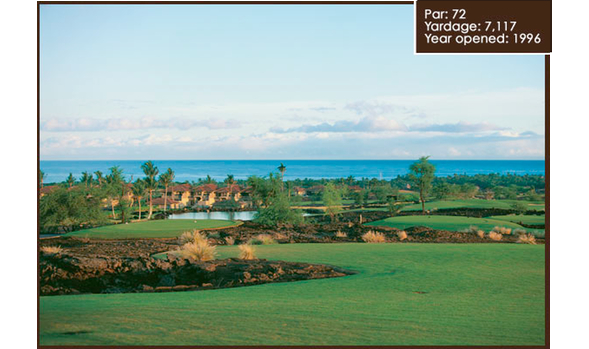 With an ocean setting and green fairways against black lava, this course has more drama than a Tennessee Williams play. The theatrics reach their peak in January when the course hosts the season-opening tournament on the Champions Tour. Hualalai has a very strong collection of par threes, particularly the 167-yard 12th with a Riviera-esque pot bunker in the middle of the green and the 164-yard 17th, which overlooks the Pacific. 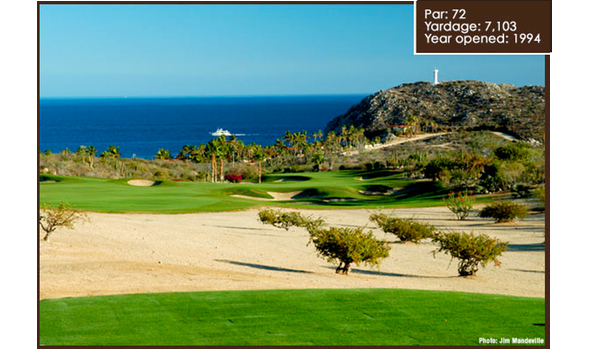 Built on a site that Nicklaus described as “the best golf property I’ve ever seen,” the Ocean course is poised against a unique backdrop of mountain, desert, and sea. Almost half the holes hug the coastline and its craggy rock outcroppings, while giant cardon cacti stand sentry over perfectly maintained tees and greens. On the 178-yard 17th, golfers tee off from a cliff over a beach to a green guarded by the Sea of Cortez. After a 2010 renovation by Nicklaus, the course now has even more ocean holes.

5. The Challenge at Manele
Lanai, Hawaii 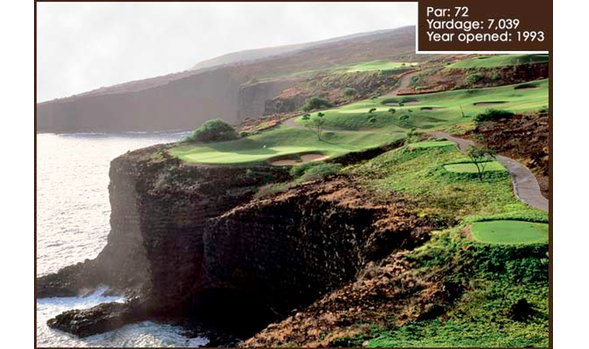 The challenge is aptly named, but with lush green fairways bordered by black lava and ocean views on all 18 holes, the course offers plenty of visual fireworks as you rack up double bogey after double bogey. Three holes play alongside the edge of the cliffs, including the 202-yard 12th (pictured), perched 150 feet above the Pacific. You may not want the round to come to an end, but you’ll be glad it did, since your reward is a stay at the luxurious Four Seasons Resort Lanai at Manele Bay attached to the course. 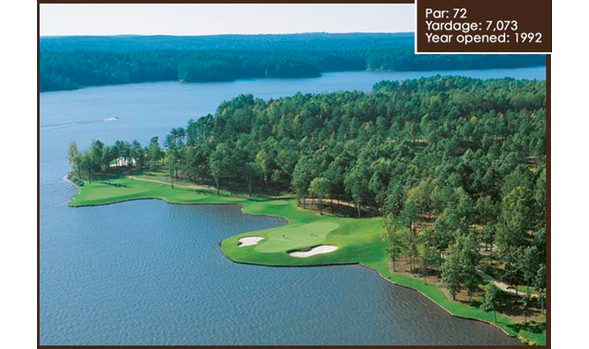 One of five courses available to guests of the Ritz-Carlton, Great Waters sits on the shores of Lake Oconee. Nicklaus routed the front nine through evergreen corridors, while most of the back-nine holes front the lake, with six greens set hard by the water. Home during the 1990s to the early rounds of the precursor of the Accenture Match Play, Great Waters underwent a complete bunker and green restoration in 2009. 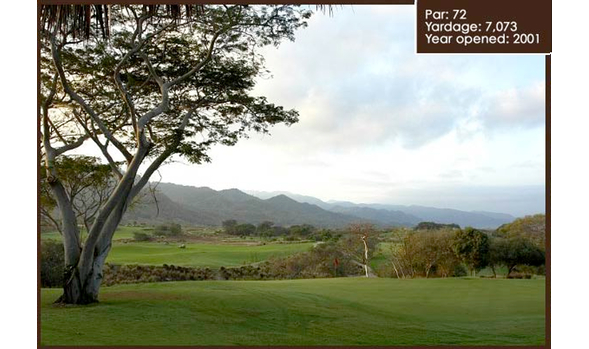 Located on rolling terrain at the highest point of the property, Vista Vallarta indeed offers up great views that can distract from the playing of the holes, which meander over grassy hillsides, through thick forests of palms and ficus trees, and around creeks and arroyos. You’ll need all your wits to battle risk-reward holes like the 381-yard 4th and the 536-yard 10th, where golfers can get home in two if they have the machismo to drive it down the dangerous right side of the split fairway. 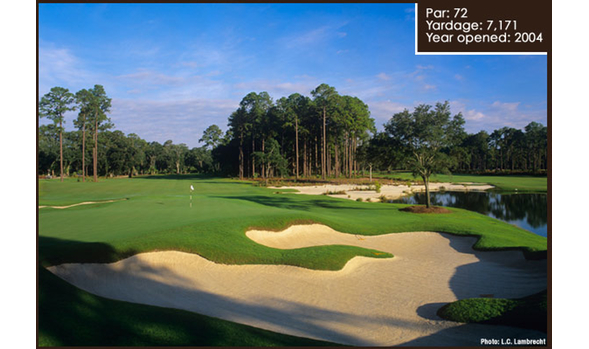 May River perfectly captures the essence of the kinder, softer Nicklaus style that has emerged in recent years. Part of the Lowcountry community of Palmetto Bluff, which includes the Montage Palmetto Bluff, the course features large natural waste areas bordering the wide fairways. The layout features a terrific mix of holes, no two of which are even remotely alike. But the best hole may be the 336-yard 7th. After a long iron or fairway wood off the tee, you’re left with wedge approach to a narrow green surrounded by wetlands. It’s the scariest short iron you’ll ever hit. 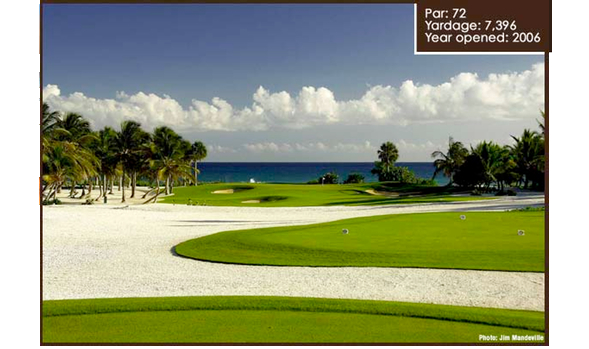 If you ever saw the Champions Tour’s Cap Cana Championship here, no doubt you came away impressed by Punta Espada, where the turquoise Caribbean Sea and white-sand waste areas surround emerald carpets of fairway. Eight of the holes at this emerging resort community play along or over the sea. There are plans for two other Nicklaus courses.

A Video Tour of St. Andrews