The Hyundai Tournament of Champions at the Kapalua Resort on Maui is the tournament that typically gives snowbound golfers on the mainland more tropical splendor than they can reasonably bear. Here’s a New Year’s Resolution for the frostbite crowd: Book a trip to the Aloha State for a sampling of the nation’s most beautiful courses. 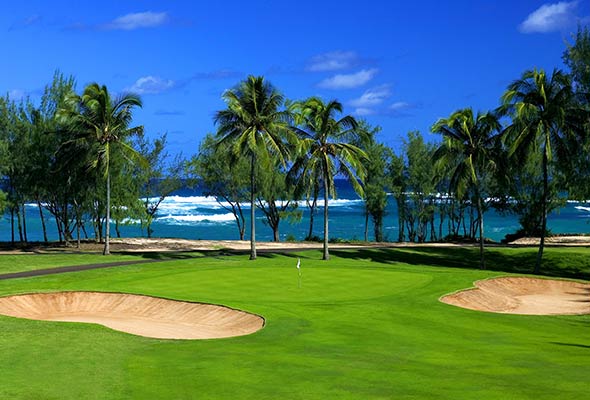 10. Turtle Bay (Palmer)
Oahu
Situated at the tip of Oahu’s North Shore near the legendary surfing beaches of Pipeline, Waimea Bay, and Sunset Beach, Turtle Bay’s Palmer Course, stretching to 7,218 yards, transitions from expansive wetlands to tree-lined fairways, with a sea-sprayed classic in store at the challenging par-four 17th hole. The onshore breeze is usually a factor on the layout’s open, links-style holes. 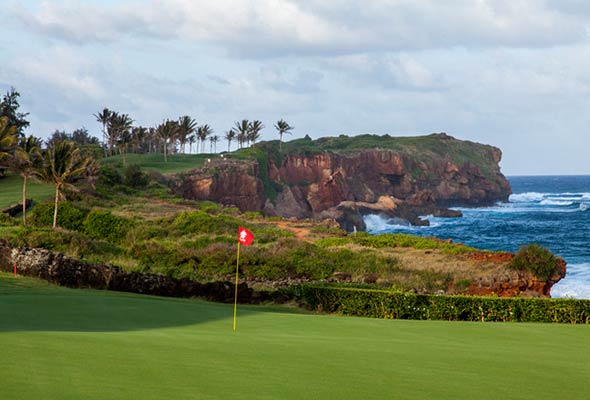 9. Poipu Bay
Kauai
Host of the PGA Grand Slam of Golf from 1994 to 2006, Poipu Bay’s seaside back nine, set below lush green mountains, skirts ancient stone walls and Hawaiian heiau (places of worship). From windswept fairways that trace the rocky shoreline, players are likely to see green sea turtles, rare monk seals, and humpback whales during the round. 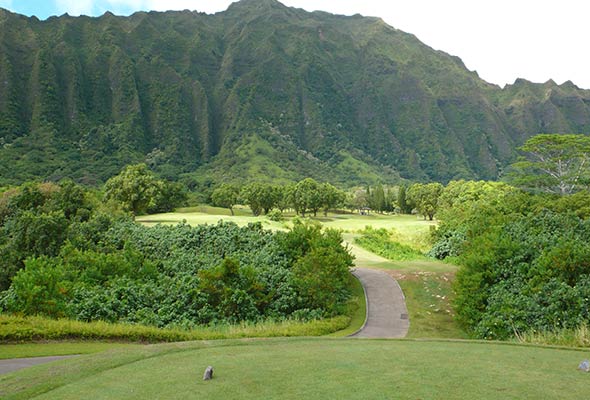 8. Ko’olau
Oahu
Carved from a rainforest within the crater of an ancient volcano on the windward side of the Ko’olau Range outside Honolulu, this daunting test of golf, one of the nation’s most difficult, boasts jungle-chocked ravines, dizzying elevation changes, and three distinct climate zones. Ammunition quota? Bring twice as many balls as you have strokes in your handicap. 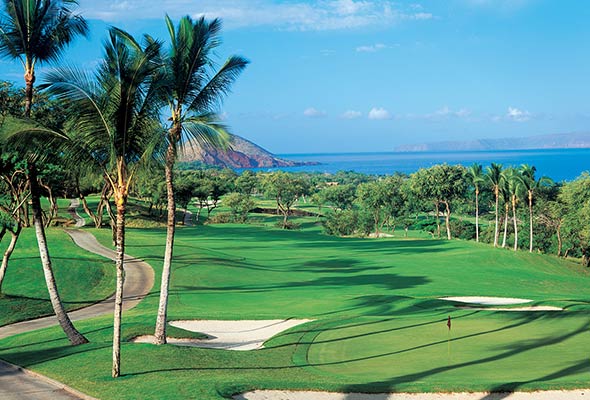 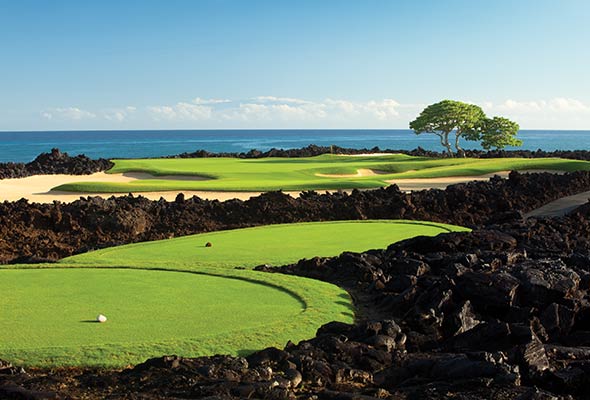 6. Hualalai (Nicklaus)
Big Island
Home to an annual Champions Tour event scheduled for later this month, Hualalai, an exclusive club available to members and guests of the Four Seasons Resort on site, is a well-groomed Jack Nicklaus-designed course that begins in a lush kipuku (oasis), meanders across very broad fairways carved into spiky black lava fields, and brings players to the brink of the sea at the dramatic, wave-tossed finish. 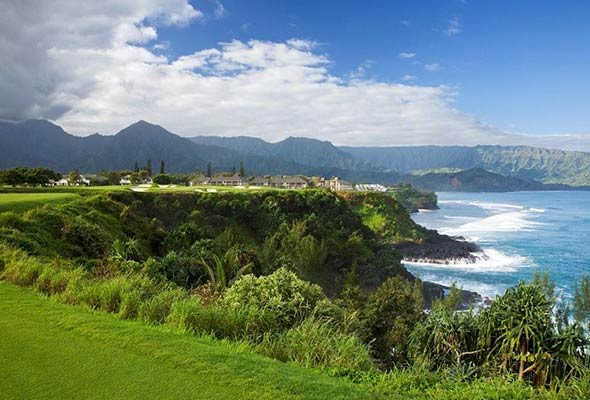 5. Makai
Kauai
Attached to the St. Regis Princeville Resort, the 27-hole layout at Makai Golf Club, designed by Robert Trent Jones Jr., in 1971, was greatly improved six years ago. The core 18, built around lakes, woodlands, and bluffs, offers stellar views of Hanalei Bay and the peak of Bali Hai along with a firm but fair test. The Woods Course is a sporty 9-holer ideal for novices and family outings. 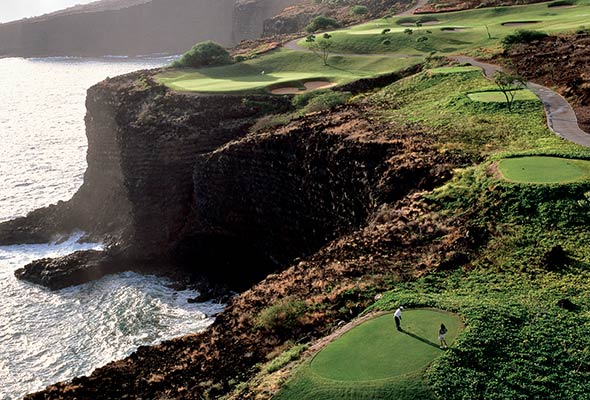 4. Manele
Lanai
Affiliated with the Four Seasons Resort Lanai at Manele Bay, this spectacular Jack Nicklaus-designed layout, etched into a sloping lava plain high above Hulopo’e Bay, is a cliffhanger of a course that calls for several forced carries over deep ocean gorges. The signature hole is the par-three 12th, which calls for a bold tee shot over a boiling cove to a green that clings to a sea-blackened bluff. 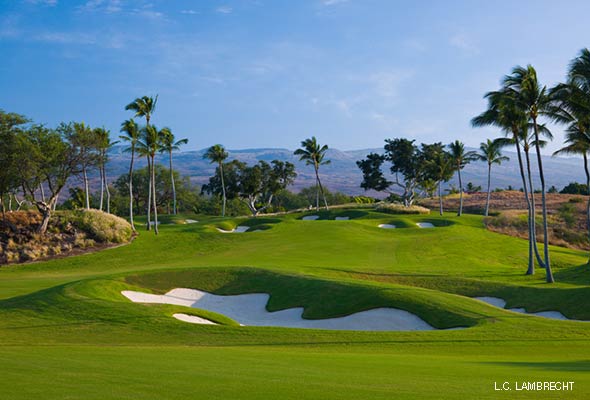 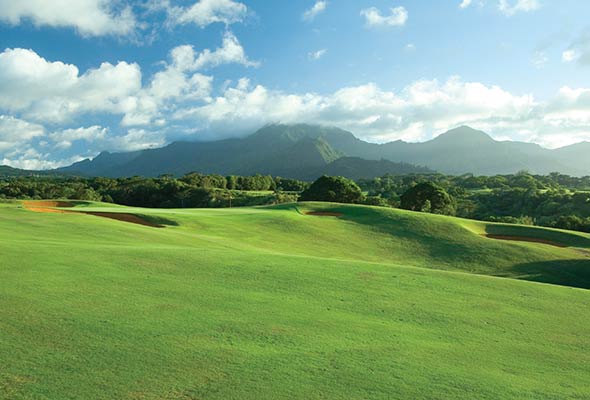 2. Princeville (Prince)
Kauai
Treated to a $3 million refurbishment in 2012 by original course designer Robert Trent Jones Jr., the Prince, ladled across 350 acres of rolling pastureland on Kauai’s north shore between the glittering sea and volcanic palisades laced with streaming waterfalls, is once again a very sturdy test from the back tees at 7,378 yards (par 72). 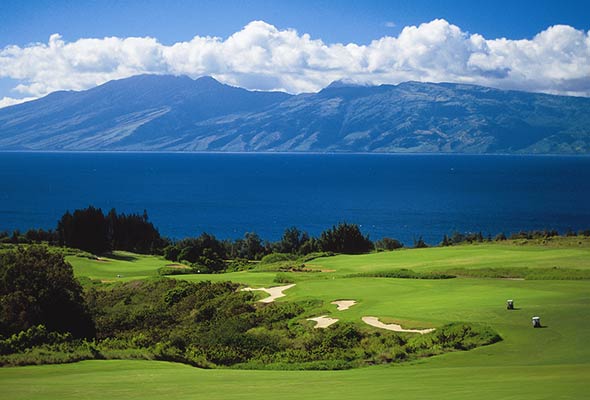 1. Kapalua (Plantation)
Maui
The PGA Tour winners of the 2013-14 season will likely go low this week on the Plantation Course, a stunning Coore-Crenshaw creation that wanders across a series of lava fingers creased by ravines and tilted to the Pacific, but the average holidaymaker will be more than challenged by this vast playground’s sprawling greens, strategic options, and steeply pitched terrain.