Bandon Dunes Golf Resort Oregon Against all odds, visionary developer Mike Keiser has built 85 holes of sand-based, walkers-only golf along the southern Oregon coast, turning Bandon into a cult destination for purists. For a genuine links experience, Bandon stands apart from all other U.S. resorts.

The Boulders Resort Arizona Originally conceived as a RockResort, The Boulders’s North and South courses are exacting target-style tests that tiptoe around tall saguaros and enormous rocks extruded from the earth eons ago. The resort’s adobe-style casitas are artfully blended into the desert.

The Broadmoor Colorado This swank, pale pink palace in the foothills of the Rockies south of Denver is an exalted grande dame set at 6,500 feet. The resort’s Donald Ross-designed East Course, revered for its large, lightning-quick greens, has hosted numerous USGA championships.

Four Seasons Resort Lanai at Manele Bay Hawaii On an exclusive island prized by billionaires, this beautiful resort on Hulopo’e Bay has been refreshed by new owner Larry Ellison, CEO of Oracle. Bill Gates got married on the 12th tee of a thrilling layout that skirts red-lava bluffs 150 feet above the Pacific. 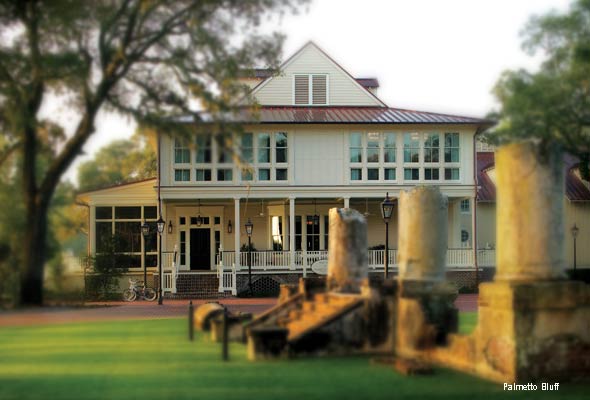 Kiawah Island Golf Resort South Carolina A surfeit of riches awaits at this 10,000-acre, 90-hole resort spread across a barrier reef island near Charleston. Highlights include the Ocean Course, Pete Dye’s impregnable sandcastle, and the Sanctuary, a lovely seaside hotel that resembles a grand Southern mansion.

Pebble Beach Resorts California Crown jewel of the Monterey Peninsula, Pebble Beach is a bucket-list course that welcomes its sixth U.S. Open in 2019. Also in the mix is Spyglass Hill, a rugged, demanding test; and Spanish Bay, its links-style course backed by the sleek, contemporary Inn.

Pinehurst Resort North Carolina A venerable retreat synonymous with golf in America, this 144-hole Sandhills complex is known for its mild climate, pine-scented air, and legendary No. 2 Course, a restored Donald Ross masterpiece that will host the 2014 Men’s and Women’s U.S. Opens in consecutive weeks.

Resort at Pelican Hill California  A stylish hideaway set high above the surfing mecca of Newport Beach, Pelican Hill—known for deluxe bungalows and a luxurious spa—has a pair of Tom Fazio-designed courses that transport players from seaside bluffs to a vast plateau 300 feet above the Pacific.

Ritz-Carlton, Dove Mountain Arizona Nestled in the cactus-studded foothills of the Tortolita Mountains north of Tucson, this posh newcomer, site of the WGC-Accenture Match Play Championship, showcases 27 holes of scenic, compelling golf by Jack Nicklaus that ranks among the Southwest’s finest.

Ritz-Carlton Kapalua Hawaii Host of the PGA Tour’s season-opening tournament, the Plantation Course at this standout Maui resort is both a jaw-dropping beauty and a grand-scale test that sprawls across lush, steeply pitched terrain. The Ritz-Carlton honors local culture with its eclectic collection of Hawaiiana. 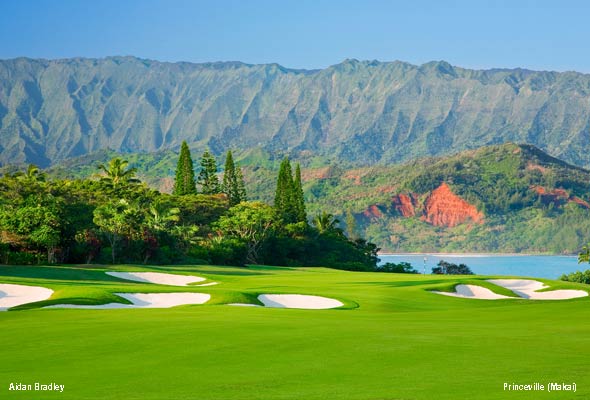 St. Regis Princeville Hawaii With the reopening last year of the Prince Course, Robert Trent Jones Jr.’s prodigious creation set on rolling tableland above the Pacific, this splendid resort, terraced down the face of a bluff overlooking Hanalei Bay, is once again Kauai’s finest getaway.

Wynn Las Vegas Nevada This resort’s price tag ($2.7 billion), improbable location on the Strip, and a rabbit-out-of-a-hat golf course by Steve Wynn and Tom Fazio add up to a Vegas winner. A 40-foot horseshoe-shaped waterfall behind the 18th green is golf stagecraft at its best.

Fairmont Jasper Park Lodge Canada At the terminus of the Icefields Parkway in Alberta is a spectacular layout by Stanley Thompson nestled into a wooded valley ringed by snow-frosted 10,000-foot peaks. Accommodations are found in cedar chalets and log cabins set along Lac Beauvert.

Four Seasons Resort Punta Mita Mexico Backed by the majestic Sierra Madre Mountains, its tile-roofed casitas set above scalloped strands of pulverized coral, this posh 36-hole resort is famed for Hole 3B on the Pacifico Course—a go-for-broke par three that plays to a natural island green.

The Gleneagles Hotel Scotland This glorious estate in the Scottish Highlands, renowned since the 1920s as the “Palace in the Glens,” offers play on the King’s and Queen’s courses, each a James Braid gem woven into glacial landforms, and the PGA Centenary Course, site of the 2014 Ryder Cup.

The Lodge at Kauri Cliffs New Zealand Set on 6,000 acres in the Bay of Islands north of Auckland, this sublime resort has three private beaches and a spectacular golf course that clings to bluffs high above Matauri Bay. The Lodge, with 22 suites nestled in a thicket of trees, is a triumph of hospitality.

One & Only Palmilla Mexico An elite hideaway perched on a rocky point in Los Cabos, this stylish resort features 27 holes of Jack Nicklaus-designed golf that proceed from arroyos, box canyons, and desert foothills to the Sea of Cortez, where A-list celebrities are known to lounge in beachfront hammocks.

Turnberry Resort Scotland Tucked along the Ayrshire coast, Turnberry is the only resort in Britain to boast an Open Championship venue. The mighty Ailsa Course, which surmounts tall dunes above the Firth of Clyde, is a perfect companion to the white-faced Edwardian hotel overlooking the storied links.

Searching for the Ghost of Francis Ouimet

The Walker Cup is Better Than Ever