Normally, I would rather undergo a root canal while in line at the DMV than play as a twosome behind a series of foursomes. But on a chilly afternoon in late October, I didn’t mind so much as Pinehurst Resort marketing executive Tom Pashley and I teed off at the showcase layout, No. 2, behind a foursome of what looked to be high handicappers, based on their lurching swings.

The extra time waiting for the group in front allows us to drop several balls around the greens and experiment with different clubs and shots to Donald Ross’ putting surfaces that are often innocuously referred to as inverted saucers. But for golfers missing the greens, the task of getting up and down is as imposing as scaling a mountain range rising from a plain.

Tom and I took turns trying shots with nearly every club in the bag: putts, flops with lob wedges, bump and runs with 8-irons, 4-iron runners, 3-wood chips. Some balls never made it up the slope to the putting surface and rolled back to our feet. Others with too much pace raced by the hole and went over the green on the other side. (Or they would have if not for our patient caddie, Eric, who lurked near the hole and stopped the shots like a hockey goaltender.)

On the 7th hole, Pinehurst’s director of instruction, Eric Alpenfels, drove out to meet us, offering a few hints as we attempted to solve golf’s most enigmatic puzzle.

In the end, we discovered that there is no single club or shot that is ideal for every situation. You can hit each shot any number of ways, but what they all have in common is that no matter the club, the margin of error is so slim that the difference between a great shot and a horrible one can be just several feet. Only at Pinehurst No. 2 does hitting a chip to 10 feet feel like knocking one to tap-in range.

While other famous resort courses dazzle guests with visual fireworks like oceanside holes and intimidating hazards, Pinehurst No. 2 looks dull by comparison. The drama is minimal: Elevation changes are modest and there is only one water hazard, a pond near the 16th tee that is out of play for all but the worst mis-hits. In addition, the wide hole corridors, framed by tall pines, look as if you could hit it anywhere off the tee.

But you soon find that being on the wrong side of the fairway makes hitting the green impossible, and the realization hits you that course management and strategy are crucial for playing No. 2. That is the greatness of the course, the reason it has been an exacting tournament test for more than a century and why, in a rare move, the U.S. Golf Association will be bringing the U.S. Open here three times in 16 years (1999, 2005, 2014).

Now 7,335 yards, No. 2 may be Donald Ross’ masterpiece, but it was hardly an instant classic. After growing up in Dornoch, Scotland, Ross was 28 when he arrived in the North Carolina Sandhills in 1900 as the professional at Pinehurst, which was part of a village founded in 1895 by James Walker Tufts as a restorative winter retreat.

Although Ross traveled around the country designing courses, he oversaw the development of No. 2 from a nine-holer first laid out in 1901. He lived next to the 3rd hole and continuously tinkered with the layout until his death in 1948. The course truly became great only after its greens were converted from sand to grass in 1935, when Ross used the opportunity to build the greens’ epic rises, swales and cliff-like fall-offs. “This contouring makes possible an infinite variety in the requirements for short shots that no other form of hazard can call for,” Ross said at the time. 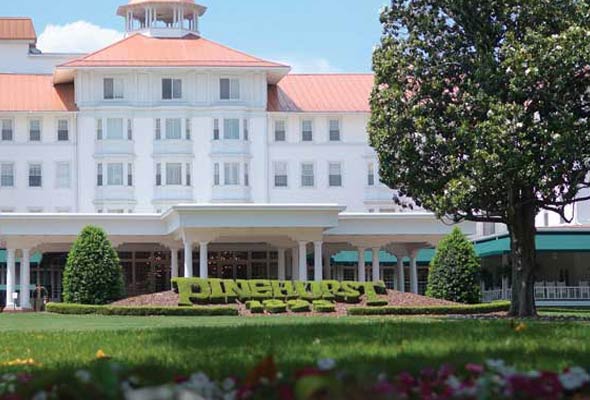 He was right. If I absolutely had to make par, I would much rather want to be on the 17th tee at TPC Sawgrass than having missed the green of Pinehurst No. 2’s 5th hole.

For the best chance to hit the 5th green, which is placed diagonally right to left, the drive needs to hug the right side of the wide fairway, which is not visible from the tee. After doing just that, I was surprised to see my ball in the rough.

Pashley explained that after the U.S. Amateur, which had been completed two months previously, the resort had maintained the fairway widths at 25 to 30 yards (same as for the 2005 U.S. Open) instead of restoring them to their original, more generous expanses. The idea was to offer guests even more of a sense of playing a U.S. Open course, and the feedback was positive.

Of course, if the setup were really like the U.S. Open, the course would be unplayable. The Bermuda rough was much shorter, so I was able to gouge a hybrid toward the green.
While playing a U.S. Open setup may be enticing, the change illustrates how much the game has changed over the decades, especially for the best players. Reinforcing that view was Eric the caddie’s observation that many of the competitors in the Amateur were using lob wedges that players in Ross’ day couldn’t have even imagined.

Because of its recent spate of championships, it’s easy to focus on Pinehurst’s present. But a large part of the Pinehurst experience is its history and standing as one of the pillars of American golf. It was America’s first golf resort, and nearly every great player of the last century has played here: No. 2 is the only course to have hosted the U.S. Open, PGA Championship, Ryder Cup and the PGA Tour Championship.

Of course, there is more to Pinehurst than No. 2, most notably seven supporting-cast courses—several of which are good enough to be headliners on their own. Originally built by Ross, No. 4 has been completely redesigned by Tom Fazio, who also designed No. 8, Pinehurst’s newest layout, which opened in 1996.

While No. 4 does not have the confounding green complexes, it is more scenic, thanks to rolling hills and a lake that comes into play on several holes. Another modern test is Rees Jones’ No. 7, which is the most difficult of the Pinehurst courses from tee to green.

Put it all together and there is one undisputed truth: No true golfer can finish his to-do list without a stay at Pinehurst. “I can’t imagine anywhere in America better suited to serving as a home for golf than Pinehurst,” said USGA Executive Director David Fay when No. 2 hosted its first U.S. Open in 1999. “The whole place just exudes golf.”

Pinehurst’s quality and quantity of courses provide a twist on the buddies trip, the most hallowed of golf vacations. One of the main appeals of such a trip (besides the company) is playing a different course every day. Often, that involves traveling. But at Pinehurst, it is possible to experience a different course with every round without the hassles of packing and
unpacking every day.

The resort can accommodate groups in its villas or condos, but for the true Pinehurst experience, stay at the Carolina. Opened in 1901, the 230-room, 14-suite hotel exudes Southern charm, hospitality and tradition, from the doormen who unfailingly greet you as you’re entering or leaving, regardless of the hour, to the biscuits and sausage gravy that are a highlight of the breakfast buffet at the Carolina Dining Room.

The rooms at the Carolina are smaller than those of more modern resorts, but all of them have been renovated recently. Getting ready for dinner one night, I turned on the high-definition television and channel-surfed until I stopped at the resort’s information channel. But instead of the usual pablum about conference rooms, spa services and check-out hours, the programming was a documentary, Pinehurst: Stories of Good Times and Great Golf.

I became so engrossed in the tales of some of the visitors to Pinehurst over the years, from Harry Vardon to Will Rogers to Amelia Earhart, that I almost missed dinner.

Which would have been a shame, because new executive chef Thierry Debailleul was hosting a tasting event that evening to introduce his fall menu. Debailleul kept some favorites like the potato-encrusted seabass, now complemented by innovative appetizers like the scallop and Carolina shrimp lollipop. But the winner of the five-course menu was the lobster cappuccino, served in a tiny cup. It was meant to be sipped, but I wound up gulping it down. Hopefully it won’t appear on a Starbucks menu anytime soon.

There are nine other dining choices, including the resort’s other flagship restaurant, the 1895 Grille, located at the Holly, a quaint 88-room property that was Pinehurst’s first inn. A short walk from the Carolina, the Holly Inn is in the Village of Pinehurst, which was laid out with the help of famed landscape architect Frederick Law Olmsted.

Thanks to visionaries like Olmsted and Ross, Pinehurst’s physical space offers the perfect backdrop, both on and off the course, for a memorable golf trip. But as I drove away, I realized that what would bring me back is the mental challenge of playing No. 2—another chance to make good decisions and execute the shots that have confounded golfers for more than a century.

Ben Wright: Greeted at the Gate

The Conundrum of Centerline Bunkers