Put yourself in the shoes of a golf course architect. You’re designing a long par three that will play 210 yards from the members’ tee. You can’t make the green complex too difficult, or the putting surface too sloping, because, after all, your average golfer will need to hit the shot of the day to even think about making par. No matter what you do, you’ve created a tough hole simply with length.

Now shorten the hole to approximately 150 yards and you need to be more creative. Length is no longer a defense while a slew of new options are available. The forced carry is back on the table, as is a contoured green and a range of bunkering gambits. You’re also dealing with a golfer approaching the hole with an entirely different attitude: He expects to hit the green, is excited at the chance to take dead aim, and, possibly, has a false sense of security.

It is that combination of feelings brought on by shorter par threes that makes them universally loved by golfers. These wee wonders tap into what makes golf so enjoyable for players, while forcing architects to reach deeper into their bag of tricks.

Here is the LINKS list of the best short par threes in the world. Each one inspires fear, requires accuracy, and encourages creativity, but more importantly, they all tap into that gut feeling every golfer loves, that feeling of, “Okay, I’m going for it. I’ve got this.” 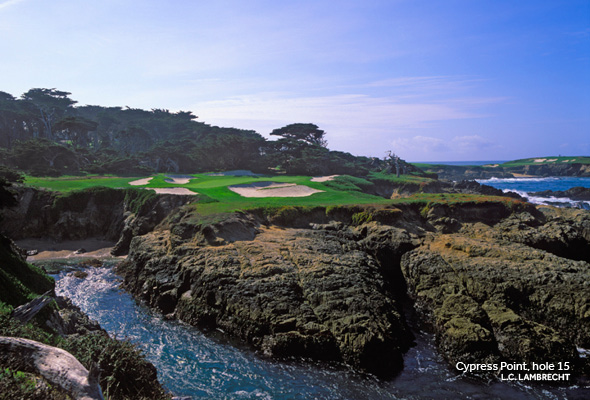 Cypress Point 15, 135 yards, Monterey Peninsula, Calif.
The walk to the  tee of this beauty is a breathtaking reveal. Waves crash beneath and distract from the small green framed by bunkers and a maritime forest. 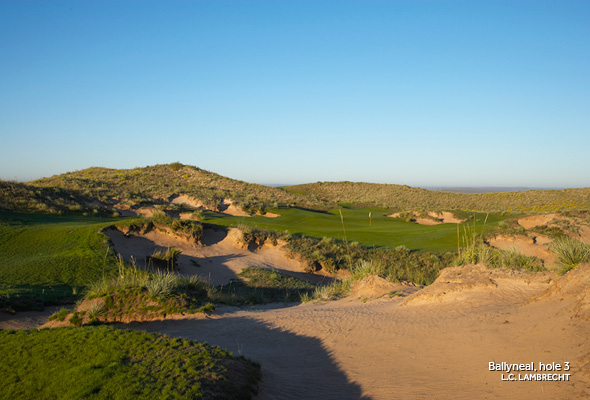 Ballyneal 3, 145 yards, Holyoke, Colo.
This hole sits so naturally within the dunes that you’d think Tom Doak simply cut the grass and put a pin in the ground. 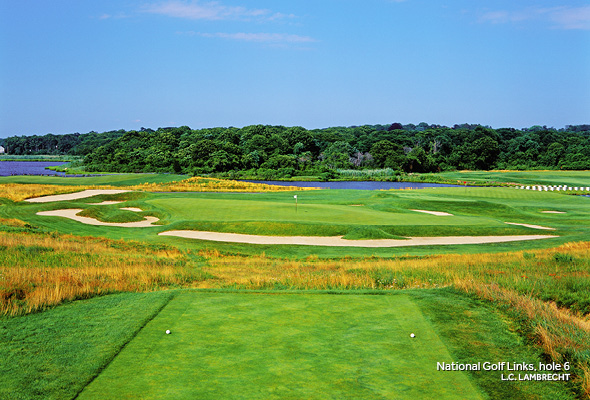 National Golf Links 6, 123 yards, Southampton, N.Y
A severely undulating green puts a premium on accuracy. Hit it to the wrong section of the putting surface and a three-putt awaits. 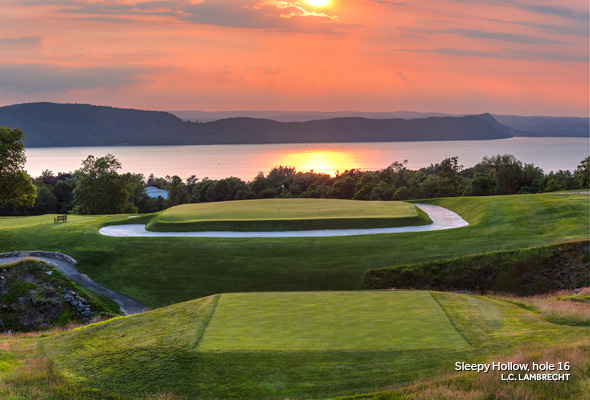 Pebble Beach 7, 106 yards, Pebble Beach, Calif.
Although well under 150 yards, this tee shot can require a short wedge or a long iron. Winds whip off the Pacific, which also provides a world-class backdrop to the hole. 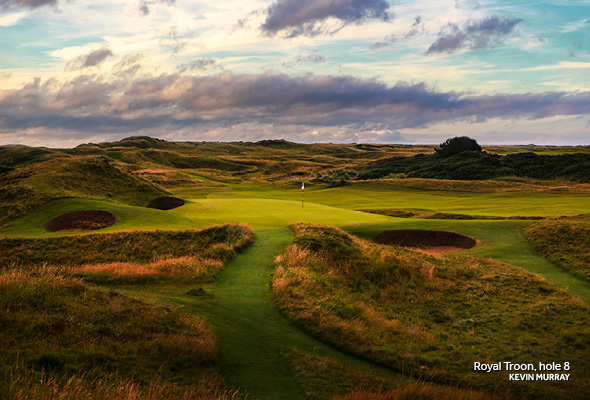 Royal Troon 8, 123 yards, Troon, Scotland
The “Postage Stamp” is perhaps the best known of Scotland’s short holes, with its minuscule green sitting on the side of a large dune. Look for more than a few debacles during the Open this year. 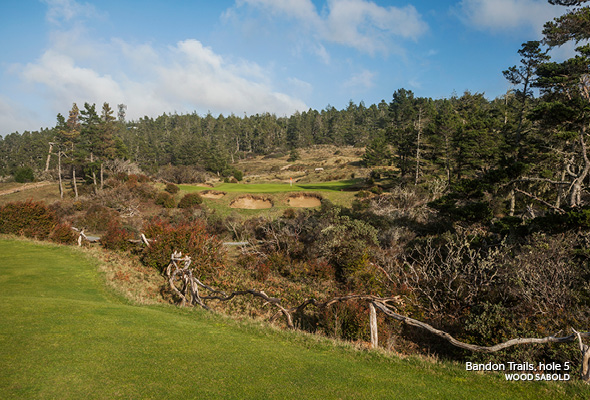 Bandon Trails 5, 133 yards, Bandon, Ore.
Coore and Crenshaw packed this 133-yarder with interesting features. A scrub valley lies short of the green, which has a Biarritz swale separating the front from the back. 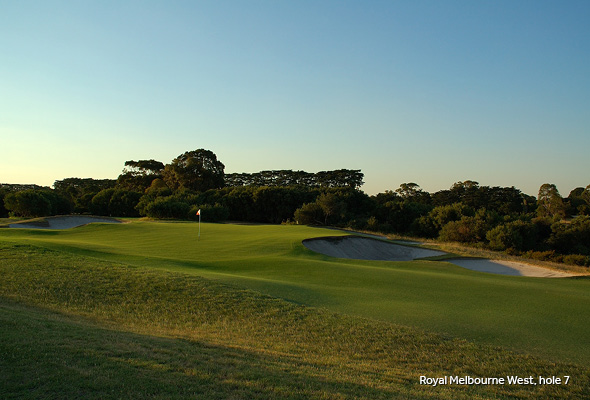 Royal Melbourne (West) 7, 148 yards, Melbourne, Australia
This green slopes from back to front and is raised so that judging the yardage of the shot is difficult whether from the tee or the oft-found front-right bunker

Shoreacres 12, 127 yards, Lake Bluff, Ill.
A Raynor gem played from an elevated tee to a picturesque green sitting in a small valley and surrounded by bunkers. 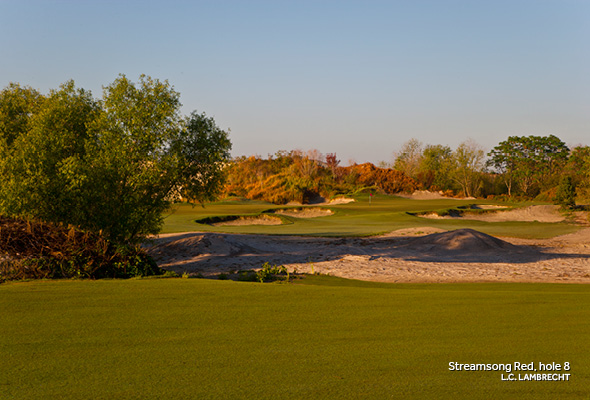 Streamsong (Red) 8, 147 yards, Streamsong, Fla.
Bunkers protrude into the massive green, squeezing it into an hourglass. Hit the wrong end of the hourglass and you’ll be spending quite some time two- or three-putting.

Barnbougle Dunes (Australia) 7
This raised green is already smaller than it appears from the tee, with the surrounding bunkers making it appear even smaller.

Friar’s Head 17
This “Postage Stamp”-style green has a severe drop off to the right, just like the original in Scotland. A severe penalty is paid for missing the green.

Garden City Golf Club 2
The only par three on the front nine, this 137-yarder plays over a small dip and is an architect’s lesson in how to effectively use a flat landscape.

Maidstone 14
A test of accuracy, this hole plays dead into the Atlantic Ocean breeze to a small green surrounded by scrub and sand.

Moliets (France) 16
Swirling winds and two long bunkers on either side of the green guard this uphill assignment, while gorse behind ensures shots hit long are never found.

Pacific Dunes 11
This green sits naturally among the scrub and blowout bunkers with the Pacific Ocean directly behind. Don’t let the crashing waves distract when putting out.

Pine Needles 3
This Ross green slopes off on both sides while a large bunker sits intimidatingly in front to swallow up mishits.

Sand Hills 17
The short shot to this elevated green can be terrifying because all you can see from the tee are the surrounding bunkers.

Somerset Hills 12
The green, designed by Tillinghast, is embraced on its left side by a lake, a feature not commonly found on early 20th-century inland courses. The setting is beautiful, especially in the fall.

Pine Valley 10
This deceptively simple hole has a sloping green but is best known for the diabolical bunker that sits short right and is known as the “Devil’s Asshole.”

TPC Sawgrass 17
Little description is needed of this famous island-green hole, an annual gut check for the pros in the Players Championship.

Toreboda (Sweden) 10
This horseshoe-shaped green places a premium on distance control, while swirling winds add to the difficulty.

Troon Country Club 15
A desert mountain backdrops this hole, which stands out emerald green among the brown and orange desert scrub.

Wannamoisett 3
This hole is the logo of the Donald Ross Society for good reason: A bunker starts on the left hillside and wraps around the front of the green. A miss here invariably leads to a big number.

Woburn (England) 3
When the rhododendron are in bloom, few holes are prettier than this downhiller with a small, pear-shaped green.

Where to Play Golf on the West Coast of Scotland