Of these two Pete Dye designs, I find that this lakeside links fits my eye better and is a lot more fun to play

I usually play Whistling Straits four or five times a year. During Packers’ training camp this year, I posted a sign-up sheet in the locker room and 16 of the guys signed up to play. We had a little draft to pick teams, but unfortunately my last pick, [wide receiver] James Jones, shot in the 130s; otherwise, we would’ve been the team to beat that day. The weather was nice and the guys had a real good time. It was just fun to be able to spend time with them away from football.

It’s really beautiful there on Lake Michigan. I played the course for the first time in 2006 and thought it was incredible. The views are amazing and it’s very challenging, with high grass to one side of the fairway and usually bunkers on the other, which makes hitting the ball straight extremely important. Then you factor in the wind, which can range from 15 to 40 miles per hour, and it makes it an even tougher test.

I think the par-three 17th, beside the lake, is one of the prettiest holes in golf. It usually plays more than 200 yards into the wind to a difficult green that kind of runs away from you, especially because you’re typically hitting a long iron. I also like No. 11, a long par five (with a herd of sheep often on it). It’s a true three-shot hole, unless there’s a strong wind behind you. You have to hit a precise drive and then a good long iron or wood for your layup to give yourself a flat lie for your approach. It’s often a hole that tells you how you’re going to shoot on the inward side.

I’ve broken 80 there a few times, but my best round was an 81 from the back tees four years ago. It’s one of my best rounds ever because the wind was blowing about 25 mph that day. I had to hit a number of very creative shots, especially on the holes into the wind. But even the downwind holes were difficult because it’s tough to stop the ball on the greens if they’re running fast. Even on a calm day, you have to put the ball in the proper spot and you have to miss in the proper spot. You often have to get a bit of luck with your lies in the fairway bunkers. There are a lot of awkward lies out there.

The River Course also is beautiful—it’s unbelievable how well manicured it is—but it’s very difficult. You have blind shots, water in play, and greens where it’s really hard to stop the ball. You have some very thick areas of rough where it’s almost impossible to move your ball forward. There’s also a lot of elevation change. The downhill shots I don’t mind so much, but the uphill ones are brutal.

The River Course just eats me up. I’ve never had a good round out there. I’ve only played it three or four times because I think it’s the most difficult course I’ve ever played. It’s an impressive course to look at, but I usually choose Straits because I don’t want to be ticked about my round for a few days afterwards as I usually am after a round at the River. I’m just a lot happier walking off the Straits Course. 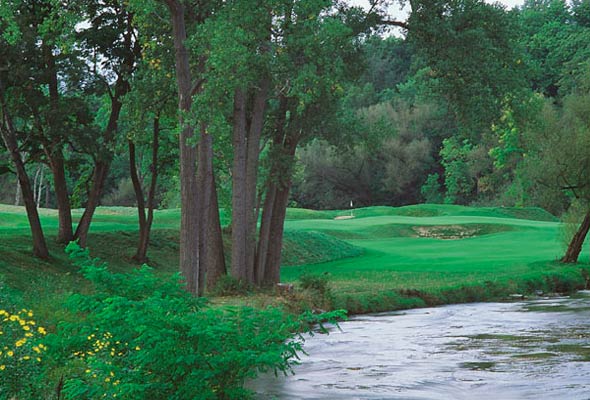 The layout is so pristine and the setting so beautiful, every hole is right out of a golf calendar even if almost every one is a potential card wrecker

It’s hard to argue with Aaron Rodgers, whose ability to hit targets apparently extends from the football field to the golf course. Whistling Straits is beautiful and beguiling and exasperating. It’s Pete Dye at his Machiavellian finest, a testament to his conceptual genius and dirt-moving wizardry. Only Dye could make you believe Lake Michigan was the Irish Sea and those soaring dunes were made not by machine but by the winds of time.

But for my money, the pristine River Course at Blackwolf Run, a few miles inland from the Straits, offers the purest golf experience in Wisconsin. From the perfect bent grass turf conditions to the lush backdrop of the glacial river basin to the pole pine log clubhouse looming over the 18th hole, the River Course is to parkland golf what Rodgers is to the no-huddle offense.

It’s almost impossible to overstate what the course has meant to golf in America’s Birdieland. It’s the granddaddy of our upscale public facilities (albeit only 25 years old) and the first of four courses built by Dye for Herb Kohler’s American Club resort. Not only did the Meadow Valleys, Straits, and Irish follow, but so did The Bog in Saukville, a fine Arnold Palmer/Ed Seay design; The Bull at Pinehurst Farms, a Jack Nicklaus Signature in nearby Sheboygan Falls; and Erin Hills, site of the 2017 U.S. Open. A combination of holes from the River and Meadow Valleys was used for the wildly successful 1998 U.S. Women’s Open (as well as the 2012 Women’s Open), the first of a string of major championships played on Kohler courses.

The River Course can be maddeningly difficult and bogey golfers would be wise to pack a few extra sleeves of balls. From the black tees it’s 7,404 yards, with a course rating of 76.2 and a Slope of 151. Only Tiger Woods or a masochist would go back there. Even from the middle of five sets of tees (6,507), it’s more than a handful. Dye uses all the architectural tricks in his book to great effect. Every tee shot introduces an element of fear, every approach must thread some sort of needle—water, bunkers, or trees—and every green is a three-putt waiting to happen.

It’s a stern challenge, to be sure. After the ’98 Women’s Open, Meg Mallon summed up the River Course thusly: “With this golf course, there’s not just bogey trouble out there, there’s massive-number trouble out there.” True that. But nobody who hits it reasonably straight walks off the River thinking he’s been gimmicked to death.

The course also is exceedingly beautiful and serene, with an abundance of flora and fauna to help ease the occasional self-inflicted pain of the double bogey or dreaded “other.” A river, the Sheboygan, really does run through it, and it’s not unusual to see fishermen in hip waders casting for salmon. While the Straits is 100 percent manufactured, the River Course was built by a glacier and fine-tuned by Dye. It’s easy to feel as if you’re in the middle of an Andrew Wyeth painting…that is, when you’re not hacking out of the native grasses or negotiating a double-breaking putt on a two-tiered green.

In 30-some rounds I have played on the River Course over the years, I have yet to witness a golfer play to his or her handicap (me included). I have also yet to meet the golfer who walks off the 18th green disappointed. The River delivers in every way what a golf course is supposed to deliver.

Gary D’Amato has covered sports for the Milwaukee Journal Sentinel for 23 years, including 65 major championships and eight Olympics.